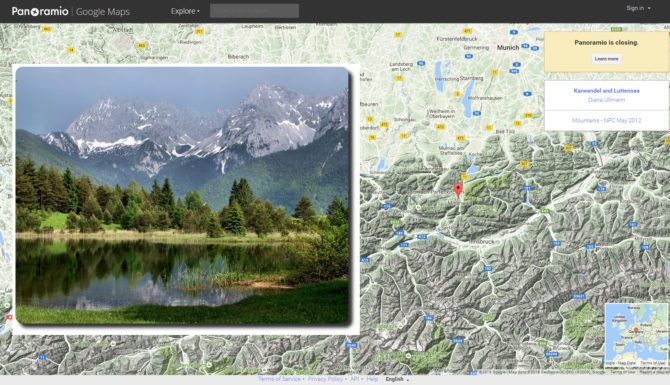 Panoramio has been one of my go-to location scouting tools for quite a while now. It’s an invaluable resource which combines Google Maps with user contributed imagery. Each of these images are GPS tagged, showing the exact spot at which they were made. Its design makes it fantastic for finding hidden gem locations nearby, or for checking out areas you’re visiting before you go.

In recent years, Google have been adding similar functionality into the main Google Maps service. Indeed, whenever you do a search for a location, there’s an “Explore” button at the bottom, and when you click it, a strip of images comes up. But for photographers, or others scouting locations, it doesn’t offer the most efficient workflow.

Google announced in 2014 that they intended to close Panoramio, in order to consolidate things a little. This announcement was met, at the time, with some criticism.

In response to your feedback, we postponed these plans and worked to add features to Maps that better support the level of engagement that you have enjoyed with Panoramio.

So far, I’ve not seen that level of engagement being implemented in the Google Maps interface.

This is how Panoramio currently presents images of my relatively local area. The map is littered with icons showing where photographs have been taken. The larger icons show a greater concentration of images shot around a particular spot. Zooming in splits those larger icons up into smaller sets representing the images. 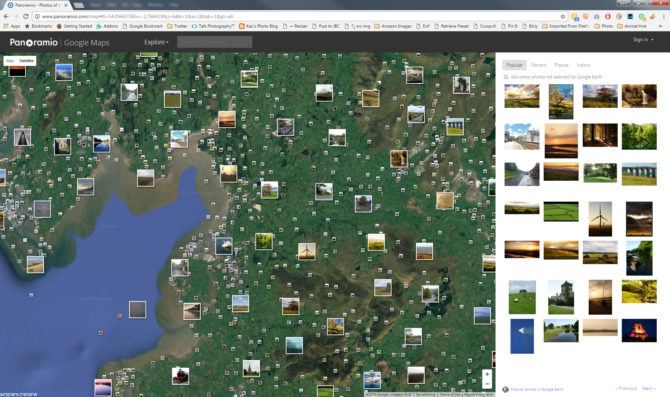 Clicking on one of those icons brings up a popup with a larger view of the images, where you can choose to either close it and move on, or go on to view it much larger. 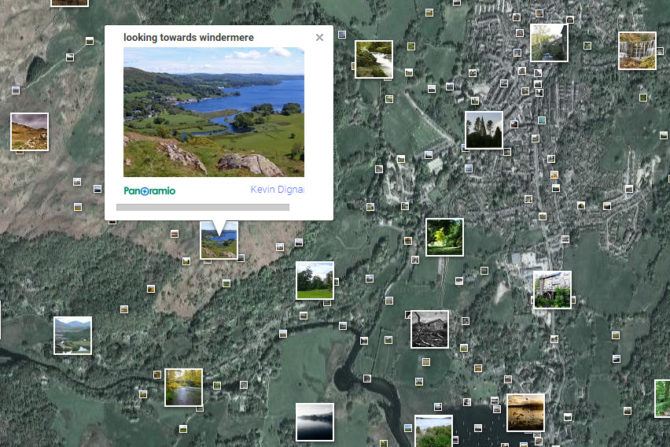 Along the side are images of areas contained within the map split up into various categories. The most popular images, the most recent images, ordered by place names, and some indoor shots of local venues (hotels, churches, visitor attractions). It’s a wonderful tool.

And this is how Google Maps currently presents images. A box along the bottom. That’s it. 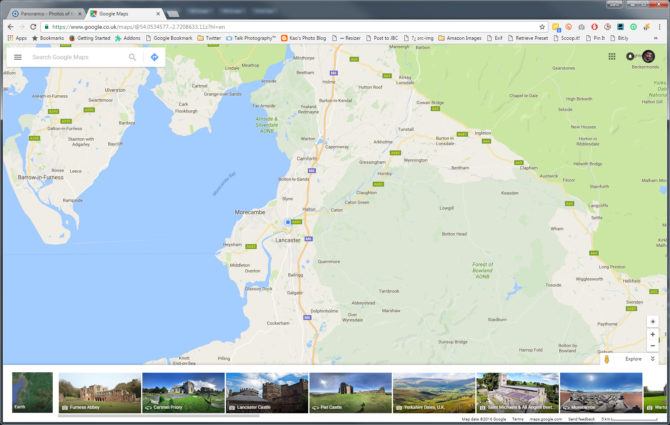 Mouse over an image along the bottom and a line appears linking to where the image was shot. When you click on an image, it zooms you in to a street level view and then brings up the photo. Exiting and zooming back out often causes the image to become lost again as the map realigns, meaning you have to scan around the map again to find where you need. Maybe you’ll even find the photo again if you’re lucky.

Interestingly, the images shown on Google Maps still link to Panoramio when you click on the titles. I’m guessing these will be transitioned over to a Maps-hosted service at some point in the future.

For those image contributors who have linked their Panoramio accounts to their Google accounts, their images will automatically be transferred over. If you haven’t linked your accounts, Google are allowing access to anoramio for a year, but folks will no longer be able to add new photos, likes or comments.

Although you’ll no longer be able to create new accounts, upload your photos, comment or like other content in Panoramio after November 4, 2016, you’ll still have access to your photos and be able to export your data until November 2017. After that, if your Panoramio account is linked with a Google account, we’ll copy your photos to the Google Album Archive so you can access them even after Panoramio is retired.

Hopefully, the demise of Panoramio means we’ll start to see similar functionality added to Google Maps itself. It would be a shame to lose it altogether and have to deal with the way Google Maps currently allows you to look at images of a given location.

To find out more, and read the full announcement, head over to Panoramio. And if you’re a contributor that hasn’t linked up your Google account yet, make sure to download and backup your images if you haven’t already!

Do you use Panoramio for checking out locations before you visit? How about Google Maps? Do you prefer the functionality of Google Maps over Panoramio? Or do you think Maps hinders location research? What other location scouting tools do you use? Let us know and tell us your thoughts in the comments.

Is Lexar closing down?