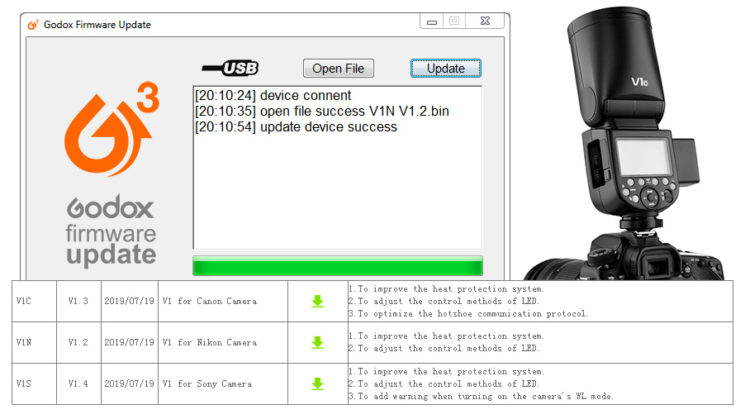 Godox has today announced new firmware updates for the Godox V1 round head speedlight for Nikon, Canon and Sony. The update for all three versions of the flash offers an improved heat protection system, and adjust the control methods using the built-in modelling LED.

Many users felt that the thermal protection on the Godox V1, offering only around 30 full-power flashes before going into thermal shutdown, was a little too aggressive. The patch notes for the new firmware simply say “To improve the heat protection system”, and after having just updated my Godox V1-N for Nikon, they seem to have done exactly that. I got up to 60 full-power flashes before giving up. To be clear, it was me that gave up, not the flash.

Thermal protection didn’t prevent me from shooting, but what seems to happen now is that the recycle times just get progressively longer and longer the more you shoot, to the point where the usual ~1.5-second recycle time slowed down all the way to around 10 seconds on that 60th full power pop. And after leaving it alone for a couple of minutes, it was enough to cool it down to give me that 1.5-second recycle time again.

So, there is still some thermal protection there, it’s not going to let you melt your flash, but it’s also not going to completely stop you from working, either, although those long recycle times might become unbearably slow if you’re shooting full power at a fast-paced event. So, I’d have a spare, and just swap them out when they start to get slow. By the time the fresh one slows down, the first one will be good to go again.

The LED control has also been tweaked. You still get the same ten power levels, but the UI is a little clearer now. The V1-C for Canon sees some hotshoe communication protocol optimisation and the V1-S for Sony gets a warning when turning on the camera’s wireless flash mode.

There’s been no firmware updates for the V1-O for Olympus/Panasonic or V1-F for Fuji. Presumably, these updates are already incorporated. There’s still no word on a V1-P for Pentax release date as far as I can see.

You can download the new firmware on the Godox website. And you’ll need the Godox G3 app for this one, which is available for both Mac and Windows.