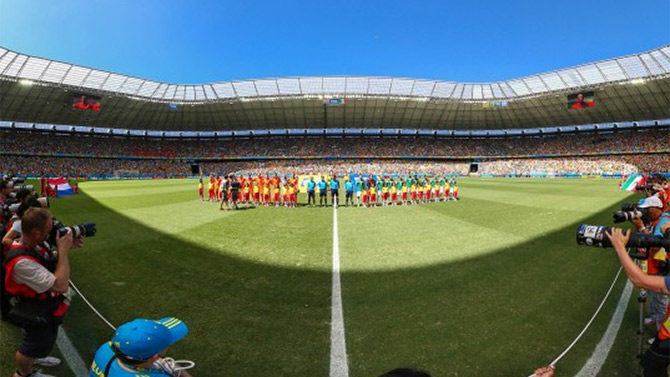 This week, Getty have launched the new Getty Images Virtual Reality Group with over 12,000 360° images, as well as gigapixel content from major events and venues.

Getty started on their 360 degree quest in 2012 at the London Olympics and at this year’s Rio Games, the company has said that every Getty photographer will possess a 360° camera.

Despite being around since the late 80s, virtual reality is still in relative infancy.  The technology 25 years ago simply couldn’t keep up with the idea.  We didn’t realise that at the time, however, and the whole idea seemed to fade off into obscurity for a while.

With the benefit of hindsight, and only now seeing seeing those old promises come to fruition with today’s technology, it’s amazing that VR managed to come as far as it did at all back then.  I actually got to play with a Virtuality headset briefly when I was a kid.  At the time, it was amazing, but it really is like comparing a calculator to a PS4 today.

The technology is still in its infancy – as are the business models addressing how to use it – but we can expect to see VR become a leading tool for visual storytelling.

This time, VR is definitely here to stay in a big way and almost everybody has a device in their pocket with VR capabilities only a piece of cardboard away.  New 360° cameras seem to be getting launched on an almost weekly basis, and quality just keeps getting better and better.

With the main focus of VR today being storytelling and recorded content, rather than computer generated, and 360° content and editing getting better and better with each new production that is released, Getty’s new archive could go a long way towards raising the bar.

The diverse range of 360 degree content that we produce – from the red carpet to the stadiums of the world’s biggest sporting events and the frontline of conflict – allows people to access information and experiences that were previously off limits.

Virtual Reality is completely transforming the way we view and experience world events.

You can read the full press release here, and you can find out more about the Getty Images Virtual Reality Group on their website.

Have you jumped into creating 360° content yet?  Or are you waiting until the acquisition and creation tools are a bit more advanced and a little cheaper?  Let us know in the comments.