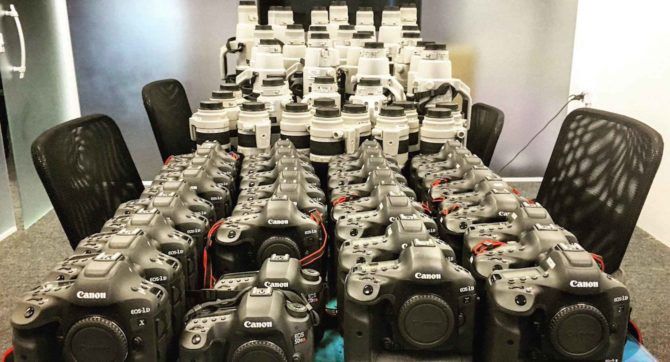 Now here’s a treasure trove many of us would love to have access to, regardless of what brand we may normally shoot. This is Getty’s arsenal for the Rio Olympics kicking off in a few days.

The Canon 1DX Mark II seems to be the clear camera of choice for this year’s games. There’s a few original 1DX thrown in for good measure. The display also sports a pair of 5DSR bodies, which appear so small in comparison that they’re almost cute.

When you look at the expected numbers for the Olympics, you can understand why they need so much equipment. With over 10,500 athletes expected to compete in 306 events in 28 different sports, though, even this seems like it might not be enough.

I’m more of a Nikon guy myself, but sights like this still get me a little weak at the knees.

Having previously worked for Reuters, Ken noted some of the changes he’s observed over the years. During Atlanta’s 1996 games it would take approximately 40 minutes to shoot, process, scan and send an image. Today, this process takes 2 minutes or less and images can be sent directly to customers around the world.

Ken says that they expect the photographers to shoot around 1.5 million images during the 16 day event. Even though the photographers will be sending JPEG files back to Getty, the storage requirements will still be pretty huge. Getty will also be keeping backups of everything, which will more than double that requirement.

As expected when photos like these appear, folks on Reddit have estimated the bodies to cost around $200,000 in total. They also suggest that the lenses shown in the first shot alone to be worth double that. Whatever the cost, it’s a beautiful sight.

Have to say, it would be neat to see all these lined up around the pole vaulters or triple jumpers for some matrix-style bullet time shots. I would imagine Getty have more practical uses in mind, though.