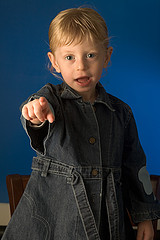 Last night I got fired by my daughter. I kid you not. She firmly stood on her two tiny legs wearing an executive outfit and gave me the hard news. My Daughter is almost 3.

Not long ago David X. Tejada (blog, site) posted a video showing his setup for a firm executive shot. You can watch the video at the end of this post. One thing that I believe pushes me forward as a photographer is learning the techniques of great photographers like David X. Tejada, and then apply them on creative ideas that I have. Note that for this learning technique to work, you can not copycat an image (there is another technique of trying to reproduce an image to learn the lighting, but that is another story).

David (AKA “X” from the title) used a technique of one softbox and one reflector placed in parallel to each other to create flattering lighting. The other lighting element is a gridspot pointing to the backdrop to create a nice round halo as background. I liked the lighting and decided to photograph my daughter with this lighting. I used a meter by meter softbox on a flash. 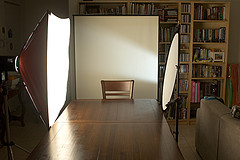 For the backdrop I used a blue cardboard thingy, which later I replaced with my granddad’s nineteen-sixty-four-cinema-screen. I used a serial snoot and pointed the flash to the screen to create a light triangle. Not the same nice halo from David’s video, but still it breaks the boredom of a “flat” background”. (Click the image for the complete setup) 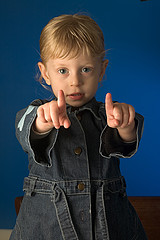 Since the flick is called “Time Lapse of Executive Portraits“, I thought to play the executive game with my daughter. After some time, we decided to play pretend angry at dad game. Of course no one really got fired during the shoot. But I have to say the darling can really play angry when she wants to.

Another note concerning the type of lighting for this scene: Since firing someone is a hard scene, involving negative emotions, I could have chosen a different “harder” lighting. This is a valid comment. If we were going this way from the start, I’d have used a bare flash with a reflector. But this “game” evolved and I decided to keep the soft lighting for when mommy comes in.

Here is the mommy shot: 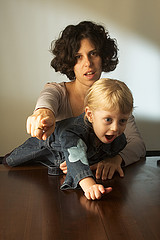 And here is David’s great video:

Related Links:
– Light Like a Butterfly
– The Strip Light That Won’t Strip You
– Lighting a Small Room by David Tejada

Homage to the Tragically Hip

Here are eight ways to get fired on photography set