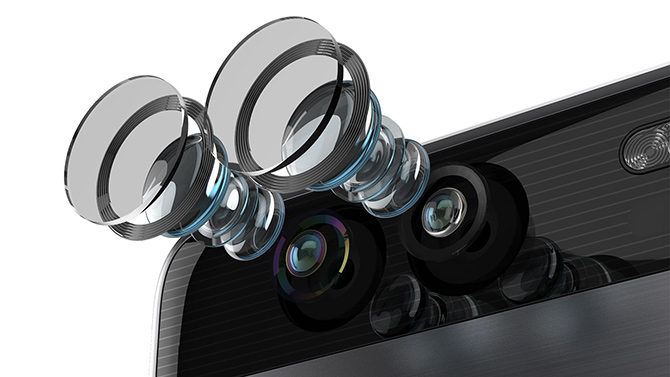 But the technology of a single tiny sensor and lens is starting to hit its limit.  There’s only so far you can go given the physical limitations of such a device.  So, let’s add a second camera.

Hell, why not add 15 cameras?  Announced last year, Light’s L16 camera set out to prove a point, that 16 cameras are better than one, especially when used with the right software.

While 16 cameras might seem like overkill, it did prove its very valuable point.  Multiple cameras in small devices can indeed increase the quality of the images the device can produce, while simultaneously offering features that have thus far been limited to more “serious” cameras, like, optical zooming and altering the depth of field.

But for mobile phones that need to fit in our pockets while also housing a whole bunch of other hardware for various tasks, a general decision seems to have been made to add just one more camera to the existing single camera setups we’ve come to know.

But what does this second camera give us?  Is it really a huge advantage over a single camera?  Can it keep up with what the L16 offers with its huge array of cameras?

LG and Huawei are starting to give us the answers to those questions with their new Android flagship phones, respectively, each of which introduces a very different dual camera system.  Applie’s iPhone 7 Plus is also rumoured to be following suit later this year, expecting to also boast a dual camera setup.

It certainly seems as though these developments are signalling the way forward for mobile photography.

In collaboration with Leica, the Huawei P9 introduces a system which uses one RGB colour camera, but also introduces a second black & white camera.

Huawei claim that when you taking away the colour information, and just looking at the brightness levels, the black and white camera can absorb up to 200 percent more light than its RGB colour sibling, meaning that shots made in low light environments have a drastically decreased level of noise, and appear much higher in detail.

But the real advantage of a second camera comes when you combine the two and shoot in colour.  Utilising the extra light gathering features of the black & white camera, the same low level of noise, increased detail, are also applied to your colour photographs.  It’s a little like taking multiple identical shots with a regular camera, then stacking and averaging them in Photoshop to reduce the noise.

Multiple cameras along with Huawei’s distance detection system allows you to simulate a shallow depth of field, and refocus the photograph after you’ve taken it, giving you a similar look to that which you might make with a DSLR.  This is something we’ve seen before with the Lytro cameras, but never in something so readily available.

The LG G5 takes a slightly different approach with its dual camera setup.

Using two cameras of different focal lengths, offering 16MP 78° and 8MP 135° fields of view the two cameras combine to give you a more realistic zoom without the artifacting you often see with digital zooms on single fixed lens camera systems.

Beyond this, there doesn’t seem much advantage to the dual camera system in the LG G5.  While two cameras would appear to be something to shout about, and something that would bring a lot more to the table, it’s still outperformed in sharpness, low light, noise levels, and autofocus speed by the single camera Samsung S7.

While dual cameras still may not give you exactly what you would get with a DSLR or a large sensor mirrorless camera, the gap is slowly getting smaller and smaller.

The idea is still fairly new, and this is only the first of the first generation of products that will contain such a system, but I can see it evolving quite rapidly, especially once Apple officially enter the fray.

With the #1 “camera brand” on Flickr being Apple, it will be interesting to see which route they take with their dual camera system, if it proves to be true, and what new standard they’ll set for the future of mobile photography.

I’ve never really taken mobile phone photography all that seriously for my own work, usually just relegating it to behind the scenes snaps and location scouting (GPS tagging is very handy for me!), but some of the new developments in tiny camera technology are starting to intrigue me, and I can see this becoming far more useful to me as it develops into a more mature system.

How about you?  Is this something you’ve been looking forward to?  Have you already ordered your LG G6 or Huawei P9?  Or are you waiting to see what comes in the next round of iPhones?

Let us know in the comments.