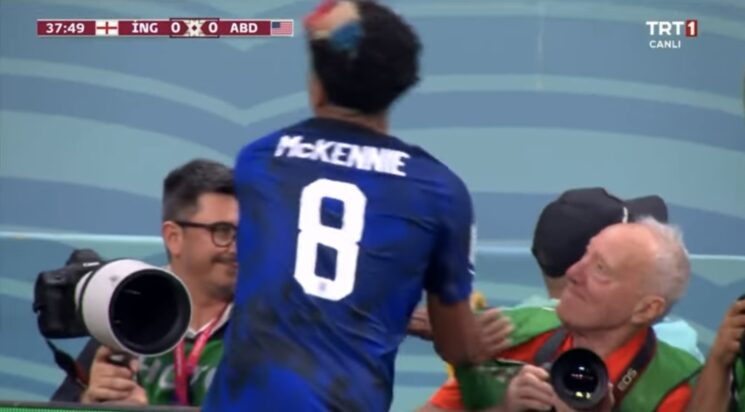 World Cup fever is officially upon us, but it’s not usually the players who resort to bizarre behaviour. One pitch-side photographer went viral during the UK versus USA match yesterday when one cheeky player used his outfit as a towel to wipe his sweaty hands on.

USA’s Weston McKennie left viewers perplexed when he approached the photographer before a long throw and used him as a paper towel. The game culminated in a 0-0 draw, and was apparently not too exciting to watch. The World Cup is currently being held in Qatar where evidently the high temperatures are causing players to sweat a lot.

McKennie certainly livened up the slow game however, leaving fans resorting to Twitter to double check what they were seeing.

“Did McKennie jus wipe his sweaty hands on a random photographer? 😭😭😭😭😭,” one asked. Others confirmed that it was in fact the case, with one laughing saying “Weston Mckennie casually using the photographer as a towel.😂.”

However, many people have criticised the footballer for his behaviour, saying that it was extremely arrogant and disrespectful. One fan commented: “The boy McKennie drying his hands on the photographer’s bib is one of the most arrogant things I have seen anyone do.“

Another was equally disgusted, saying: “Eww, McKennie did not just rub his sweaty hands on a photographer, disgusting.”

It’s even stranger because the photographer just looks completely bemused by the whole episode. Presumably if he’s been in the job for a while he’s seen a lot and I doubt that this would have phased him. Still, it’s nice to see people sticking up for photographers. Next time maybe he will bring an extra hand towel for any errant footballers to use instead of his shirt!

What do you think? Amusing or disrespectful?

[Via The Daily Mail]