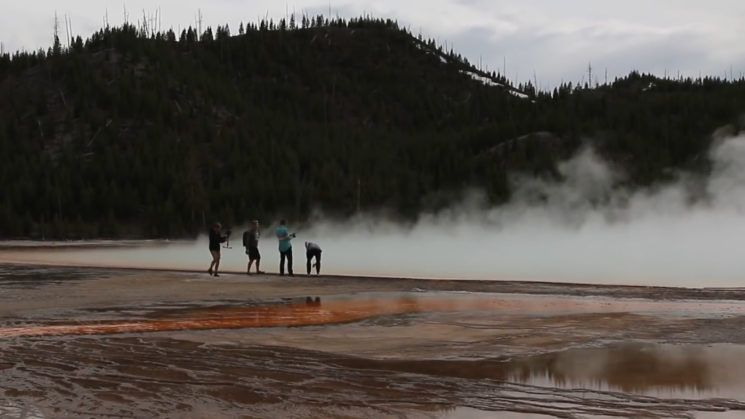 The remaining three of four filmmakers who decided to ignore signs and trample the Grand Prismatic Spring in Yellowstone National Park, last year have now been sentenced. The incident happened in July 2016. In November, one of the four, Hamish McNab Campbell Cross pleaded guilty to foot travel in a thermal area and disorderly conduct. He was sentenced to five years unsupervised probation, $8,000 in fines, and banned from US Public Lands for five years.

Now, the three other members of the group, “High on Life SundayFundayz” have returned to the USA to face the music. Canadians Charles Ryker Gamble, Alexey Andriyovych Lyakh and Justis Cooper Price-Brown have been sentence. Between them they have received fines totalling over $7,500, community service, and a brief amount of jail time.

Lyakh and Gamble pleaded guilty to disorderly conduct by creating a hazardous condition and foot travel in a thermal area, using drones and bikes in closed areas, and performing commercial photography without a permit.

These charges not only cover this incident, but also neglicence in Zion, Death Valley and Mesa Verde National Parks. The pair are banned from US Public Lands for five years, will each serve 7 days in jail, pay $2,000 each in fines, and must perform community service at Yellowstone Forever. Presumably this community service is an exemption from their ban.

Price-Brown avoids jail, however he must pay $3,500 in fines, and also perform community service at Yellowstone Forever.

What do you think? Was the punishment tough enough? Too tough? Did they get off easy? Is it enough to deter others from doing similarly stupid things? Let us know in the comments.