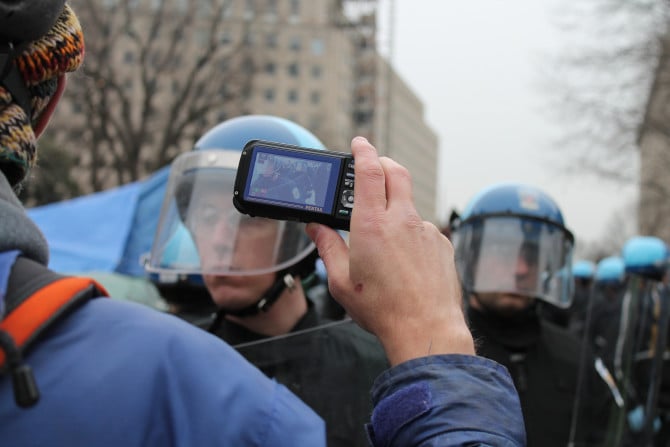 With at least 1,108 American citizens killed by police in 2014, including some high-profile cases like the Ferguson shooting, and 2015 headed towards a similar figure, public scrutiny of law enforcement has increased dramatically.

Blaming police for killing innocent people as well as using excessive and fatal force against criminals, many civilians have taken it upon themselves to hold police officers accountable for their actions.

Be it by installing dashboard cameras in cars or recording police activity out in the streets, civilians are making it harder for officers to get away with police brutality and civil rights violations.

But, is it possible that this increased scrutiny is causing police officers to fear becoming the “stars” of the next viral video and in result leading to an increase in homicides and other crimes?

According FBI Director James Comey, this is exactly what’s happening, and if concerned civilians keep it up there will be “profound consequences”.

According to the New York Times, in a speech he gave at the University of Chicago Law School several days ago, the FBI chief said that officers in some cities may have become less aggressive following the recent scrutiny and criticism of police brutality.

Comey added that police leaders have told him that officers these days prefer to stay in their patrol cars rather than stop to question suspicious people, fearing their actions will be recorded and shared worldwide. That hesitancy, he said, led to missed opportunities and ultimately a decreased police presence on the streets.

“I’ve been told by a senior police leader who urged his force to remember that their political leadership has no tolerance for a viral video,” the FBI head said, adding that police members in all ranks had spoken to him about this issue but are afraid to do so publicly.

“Lives are saved when those potential killers are confronted by a police officer, a strong police presence and actual, honest-to-goodness, up-close ‘What are you guys doing on this corner at 1 o’clock in the morning’ policing,” Comey said. “We need to be careful it doesn’t drift away from us in the age of viral videos, or there will be profound consequences.”

Comey’s speech is said to have caught the top levels of the Department of Justice by surprise, as they do not agree with his theory and are said to have made holding police accountable for civil rights violations a top priority in recent years.

That being said, Comey himself acknowledged that there isn’t sufficient data to back up his claim and that other factors such as cheaper drugs and an increase in releasing criminals from prison could have also contributed to the elevated crime levels.

“I don’t know whether that explains it entirely, but I do have a strong sense that some part of the explanation is a chill wind that has blown through American law enforcement over the last year,” he said.

The NY Time reports of a ‘sharp disagreement’ among law enforcement officials over whether the so-called Ferguson effect has any merit to it or not.

“Our officers are very, very sensitive to the climate right now, but I haven’t seen any evidence to say our officers aren’t doing their jobs,” said Oakland Police Chief Whent.

“Trying to correlate it to a Ferguson effect, I don’t believe is appropriate,” said a police spokesman in Washington, Lt. Sean Conboy.

Seattle police chief Kathleen O’Toole said that the number of officer-instigated stops had declined and crime picked up after the Justice Department and civil right activists accused local cops of discriminatory policing and excessive force. However, O’Toole added that police leadership had to insist on reversing that trend and that the criticism had forced her department to improve.

“There’s never been as much scrutiny on police officers as there is now,” said Chief O’Toole. “We should embrace it.”

Supporting O’Toole’s call to welcome scrutiny are the investigations by the Justice Department which found that officers in Ferguson and elsewhere were unfairly stopping, arresting and using unjustified force against African-Americans.

These investigations and the public’s increased scrutiny and awareness might not have happened were it not for the civilians who recorded the deadly police encounters. Keeping that in mind, while Comey’s remarks might have some truth to them, is it justified for the chief of the nation’s most prominent law enforcement agency to talk out against those trying to keep officers of the law in check?

After all, it’s kind of ironic (and by ‘kind of’ I mean very) that the FBI constantly says that people who have nothing to hide have nothing to fear of their surveillance programs, but thinks that police officers throughout the US are unable to do their jobs correctly in fear that they might be recorded.

Several bills have been proposed in the last year attempting to limit civilians recording police or regulating how the media and civilians may do so. While these bills claimed to be aimed at preventing interference with police work, they were seen as attempts to help police avoid scrutiny and being held accountable for violating civil rights.