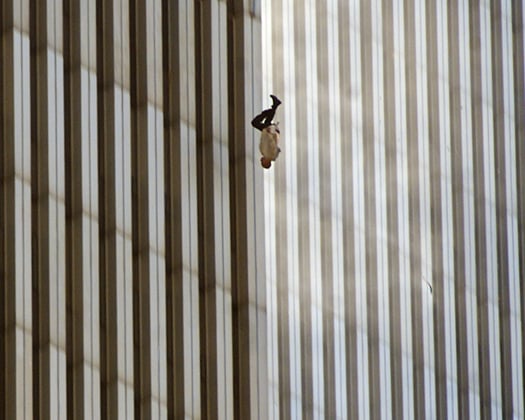 Some dates are defining dates and everyone remembers where they have been on those date. One such date is 9/11. If I asked you where you were on that day you’d probably remember. One of the photographs most associated with that day is The Falling Man. Interestingly, despite the strength of the photo is has almost disappeared from the news shortly after it was published. Here is some context about the photo:

The Falling Man is a photograph taken by Associated Press photographer Richard Drew of a man falling from the North Tower of the World Trade Center at 9:41:15 a.m. during the September 11 attacks in New York City. The subject of the image, whose identity remains uncertain, was one of the people trapped on the upper floors of the skyscraper who either fell searching for safety or jumped to escape the fire and smoke.

With the opening of the 9/11 Memorial in Manhattan, the Design Observer ran an interview with Henry Singer who directed a documentary about this photograph back in 2006 – It tells the story of this controversial image: who took it; how it was first published and censored; the responses of the families, and the search to discover the identity of the man in the photograph.

Interestingly, Singer notes that while this was one of the  images that stood out on that day’s coverage it has almost gone away, to the point where Singer decided it deserves a movie:

There were so many images coming across the wire that day but this one stood out for her because it encapsulated the horror of the day. And yet at that paper, and across the country, there was an outcry from the readership saying how could you publish an image like this? This is offensive, our children could have looked at it, and a result the image basically disappeared from sight. It became a charged image very quickly and it disappeared from sight very quickly

Singer speculates about the reasons for the photo going away:

A culture like the United States prides itself on triumph, on winning, on overcoming the odds, on the myth of the city on the hill. It’s a kind of culture — and I say this as someone who grew up in the States and who now lives in Europe — that has to find some form of triumph in the face of a horrific event. And that’s where the firefighters come in. I have to add that is what most cultures do in the face of a horrific event. I think its part of our nature as human beings to wrest redemption from any event like this. Otherwise it becomes impossible to bear.

It is no question that the firefighters became the story that Americans told themselves. And as Tom Junod succinctly puts it in the film an image like the Falling Man, and the reality of the jumpers themselves, just didn’t fit that narrative. It’s very hard to frame them as something that is triumphant.

Singer also thinks that the fact the the image went away was wrong:

You can see the movie below and read the full interview with Singer on the Design Observer, and the originating article from Tom Junod on Esquire.