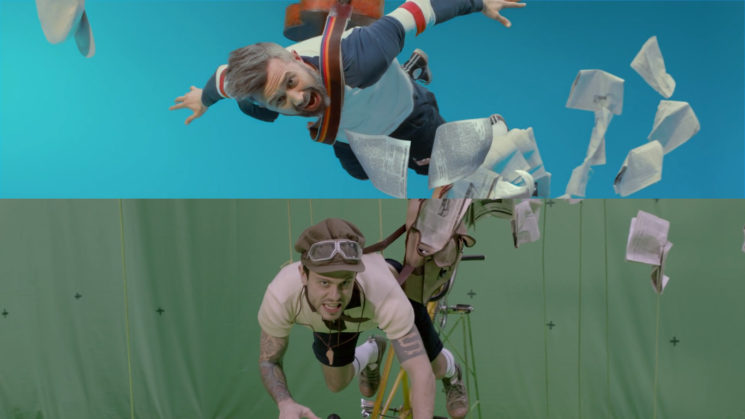 I still remember my first impression when I saw the bullet time effect in Matrix. And it’s still awesome to this day. Of course, it’s a Hollywood movie, and not all of us have the budget to create it like they do. A creative Russian director Max Ksjonda created this effect for a music video and posted the BTS video of how he did it. It doesn’t require an array of cameras and a huge budget. All you need is a single camera, a green screen, and some stands and ropes.

Max created this video for a song of a Russian band 5Nizza, Samoliot. The guys are hanging mid-air in a range of crazy situations, looking like they’re frozen in time – but they lips move as they sing. As we can see in the BTS video, they are actually suspended by ropes, as well as their props. For some scenes, there are also green stands for the props or the band members. Everything was recorded against the green screen with a moving camera, and later all the stands and ropes were edited out in post. As Max writes in one of the comments, it took him 2-3 months to finish the entire project.

Although Max’s approach isn’t a real bullet time, it still looks pretty cool. I guess it does require some time in the post to remove all the stands and ropes, though, but I think that the result is worth it. And if you pair the setup with a rig like this, you’ll have the ultimate budget solution.

How to fake the 2 stops magic bullet in Photoshop.

« Automotive photography isn’t just another subject. It’s a way of life
Samsung is building its own 1,000fps camera to fight back at Sony »