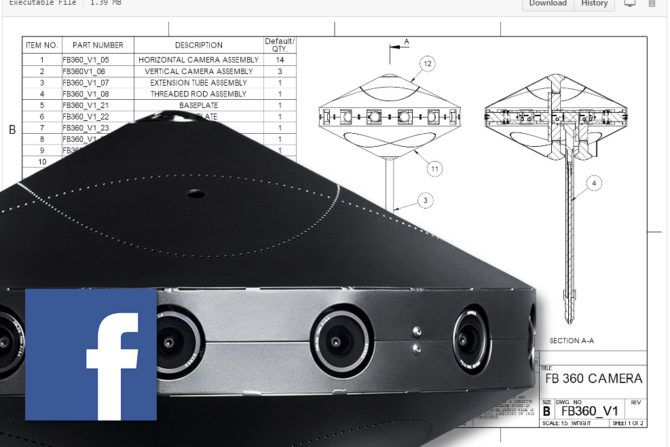 Facebook first introduced the world to Surround 360 in April. It’s a 3D 360° camera rig that shoots up to 8K footage per eye. They announced at launch that all the designs and software would be coming to GitHub this summer and it’s finally here.

Built using 17 4MP cameras, it has a total cost of around $30,000. So, it’s not the type of inexpensive weekend project to do with your kids. It will, however, produce significantly better footage than most consumer 360° solutions. At that kind of price, though, you’d expect as much.

With all the parts laid out, Facebook say it took a randomly selected engineer about 4 hours to build.

14 cameras surround the centre column. This creates a pair of 360 degree clips, with the offset between lenses producing left and right eye views. A single camera covers the top, and two cameras at the bottom allow easy removal of the support column & tripod.

The rig shoots 4K, 6K and 8K footage per eye.  8K may seem a bit extreme as there’s almost no platforms out there capable displaying at such a high resolution. But, it does give potential future-proofing options for when the hardware does become available.

It also means that scaled down to 4K or 1080p, you’re getting finer detail. It’s the same reason many shoot 4K today even for 1080p content.

Here’s a sample of the rig in action.

I looked real hard, but I couldn’t see any stitching lines in there, which is pretty impressive. Given the cost, I can’t see myself building one. I do wonder how well this might work with much less expensive cameras, though, say the Raspberry Pi. What interests me the most about this, is the software.

I have a 360 rig that holds half a dozen Yi Action Cameras. With the only decent stitching software available being the rather expensive Kolor Autopano and VideoStitch Studio, an Open Source solution would be nice. If it’ll work with anything other than Facebook’s monster rig.

If even the thought of buying a bunch of action cameras is still a little on the pricey side, you can always try something like the Ricoh Theta S.

Do you shoot 360° video? What are you using to create it with at the moment? Will you be stepping up to the Facebook rig? Will you be having a go at modifying it to make it a bit less expensive? Let us know in the comments.

« Amazing Deals on Photography Gear – 5 Great Options for Used Equipment
Before and after: hard light, and overwhelming tones »