So, after the dust has fallen on the MōVI announcement, photographers and makers are starting to pop up with home brew versions.

The eSteady by Tom Parker is not a full MōVI in the sense that it only manipulates 2 axis rather than the 3 axis stabilization done by MōVI. Of course it is also 75 times cheaper, price-wise you are giving up one axis for $14,800. Sounds like a good bargain to me. Also it is used for light weight camera like the GoPro. 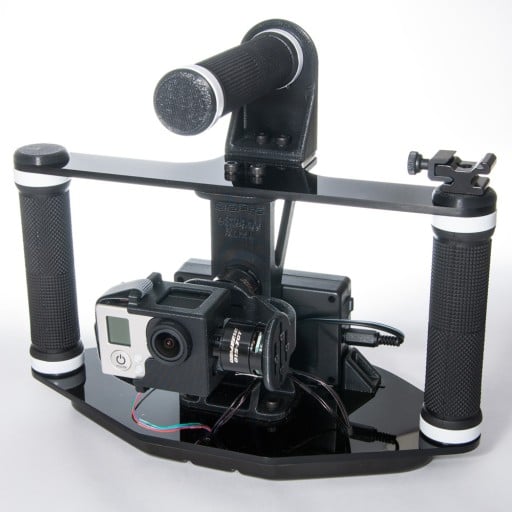 It is not surprising that in addition to his photography background, Tom also has aerial photography and makering experience.

The demo reel is quite impressive:

The eSteady is built with brushless gimbal which can produce high torque over short periods of time. Having access to sort of a maker space at his university Tom fabricated some of the parts on his own:

This rig was made so I could test the brushless gimbal technology for myself. I managed to source some electronics for the brain of the system and jumped onto CAD to create the parts. The GoPro was the obvious choice to design around as they are small, light and produce great quality shots. The SRP GoPro tray was in my mind as I was a fan of the position of the grips, but I felt another was needed to get low shots easily.

The rig consists of a laser cut perspex base, 3D printed parts for the other structural elements of the system and a vacuum formed under tray to house the electronics. I’m lucky enough to have access to these facilities at my University, which is the only reason why was able to design and build the rig in a week. I’m lucky I know.#

Here is a quick show of how well it performs.

for more details hear over to Tom’s blog.

A Home Brew TLR That Shoots On Polaroid

How To Make a Home Brew Smartphone Film Scanner

« Human Silhouettes Created With 25,000 Pinholes Photos Of The Sun
The Light Blaster™ Is A Reality Altering Strobe Based Projector »