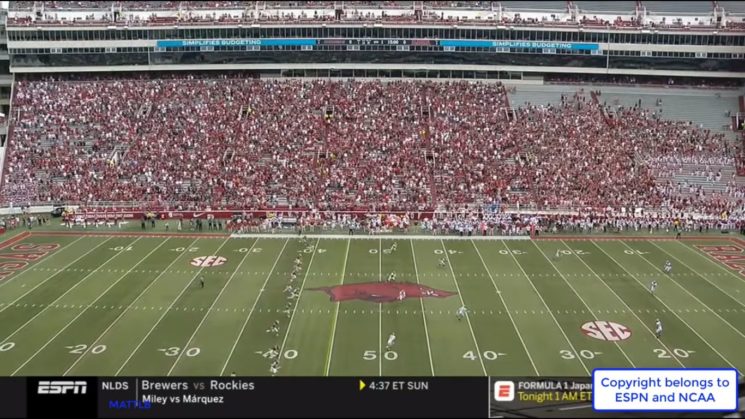 During an Alabama-Arkansas game this Saturday, ESPN removed some camera operators from their positions in Razorback Stadium because of a bad weather. As a result, only wide-angle view was broadcasted, which made the players look like ants. And expectedly, the Internet had no mercy when it comes to cheeky tweets.

You’re used to seeing a more zoomed in view of the players and action in the field. When a network broadcasts a game, there are a few manned cameras around the field and several unmanned cameras elsewhere in the stadium. However, during the Alabama-Arkansas game, there was a danger of a lightning strike, so the manned cameras were removed for the sake of the crew’s safety. As a result, the viewers only saw the action in the field as if they were observing a formicary, and some pretty hilarious comments emerged.

Alabama scored before ESPN even got its cameras set up. pic.twitter.com/3ONNFa5X9D

These ESPN camera angles for Alabama-Arkansas are like when your aunt tries to film a pee wee football game from the stands with her iPhone.

If this is the best ESPN can do, they'd be better off streaming it from some fan's phone.

Here is an instant replay of that fumble pic.twitter.com/4SBnWLmPAN

How Alabama and Arkansas fans watching the game at home. pic.twitter.com/zMN5Qgbgov

Alabama-Arkansas is currently being broadcast via Google Earth

Okay, I had a chuckle at some of these comments, but there was definitely a good reason for removing the camera operators from the field. I know you might have had to use binoculars to watch the game at home, but safety should always come first, and this was a responsible thing to do.

« The latest Windows 10 update could delete your photos, make sure to backup your files
How to make a “flow motion” timelapse film »