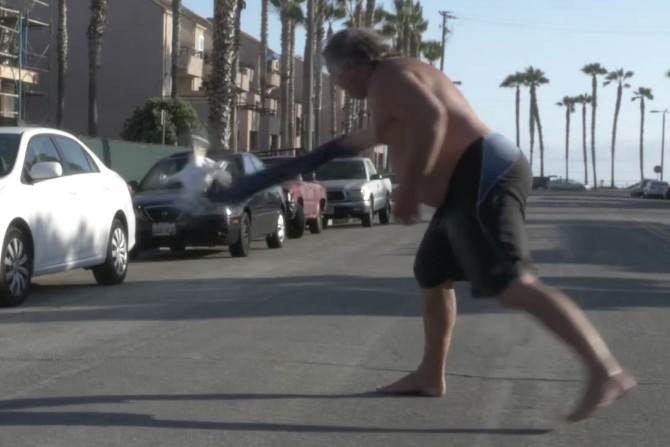 Some people love drones, others hate them. Hate them so much in fact that they can’t help themselves when they see one.

The guys over at Lucky 7 Drones say they were busy shooting instructional videos on the DJI Phantom 3 when an intoxicated, half-naked neighbor decided to put an end to their day.

“If you put that over my house I’m gonna be pissed off, you understand me?”, said the neighbor, not waiting more than a couple of seconds before ensuring the drone doesn’t go anywhere near his house.

The video shows the neighbor coming towards the drone just two seconds after takeoff, so it’s safe to assume that something had occurred prior to this. Perhaps the drone had flown over the person’s house or maybe the drone operator did nothing wrong and this was a preemptive strike.

Just after trashing the drone, the neighbor added “I don’t even think that’s legal”.

Funny thing is, regardless of what happened before this recording began, the neighbor himself was clearly on the wrong side of the law.

Probably thinking he was within his rights, perhaps due to said intoxication, the drone-hater quickly discovered that just because the device sounded like a giant mosquito doesn’t mean he could smack it with his shirt, as is stated in the video caption over on YouTube:

“The EXTREMELY inebriated neighbor could barely talk when the cops came. Did you know damaging a drone valued over $500 is a FELONY?? This guy found out the hard way when he refused to pay for the damage! The BEST part was when the cops asked him about the big GASH on his leg and he admitted the drone hit him when he swatted it! BUSTED 4K Camera and 3 Props!”

An update has since been posted, stating that due to the drone’s price the neighbor could face felony vandalism charges:

“We have a Police report and yes he is CRIMINALLY Liable!  The drone is valued at $1350.  Anything over $900 in California is FELONY VANDALISM.  The cops told the guy on the spot that they would let him sober up and that today he should reach out to us and make restituttion for replacement.  Still no word!”

While I’m not holding my breath about these guys getting their money anytime soon, it’s nice to see that the police didn’t give the drone operators a hard time.

I guess the neighbor’s best defense at this point would be to claim that he simply destroyed a killer drone that was out to get him and his family.

UPDATE: Lucky 7 Drones added a blog post about the incident and they state they did nothing to annoy the neighbor:

“While standing in front of one of our homes and filming a shot with the drone only rising 3-5 feet max, a disgruntled drunk neighbor snuck up and used his t shirt to swat the drone out of the sky. […] Keep in mind, we NEVER flew over anyone’s homes, in front of windows or did anything to be invasive.  We were hovering 3-5 feet off the ground to show off the sensitivity of our new aerial media platform”.

Explaining how come nobody reacted when the neighbor approached the drone, they said everybody was focused on their tasks and didn’t notice. “It was one of those “did that really just happen” moments!”.

They also added that losing a $1,350 drone is a serious loss for a family business and that small claims court may be required as the neighbor “is not acting like a grown up and accepting responsibility for his actions”.

Man Shoots Down Neighbor’s Drone, Has To Pay For Damages

« Video Production: how to properly slate and what to avoid
Introducing Seawolf – The new remote-operated GoPro submarine from TTRobotix »