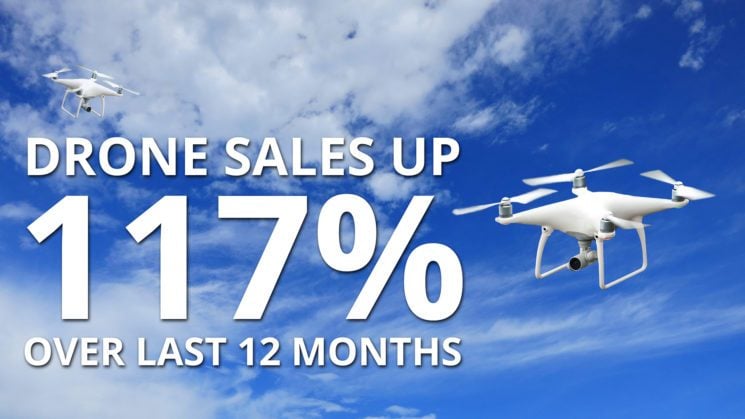 Some drone manufacturers didn’t have a great holiday season last year. But that hasn’t stopped people from buying them. According to a new report from market research company NPD, “premium” drone dollar sales are up. And up in a big way. They’ve more than doubled on the previous year, rising by 117%. NPD define “premium” as drones costing more than $300.

While 2017 will see mid-tier and entry level drones (priced under $300) continue to drive unit demand, new form factors and innovations in sensing and imaging technology will help meet the needs of premium drone buyers

During the holiday season, they say that the entry level drones ranging from $50-100 saw a significant increase in sales. They accounted for 42% of unit sales during the three months ending in December 2016. It made up a quarter of drone sales during that same three month period. In the previous nine months, they only accounted for 25% of drone sales and brought in a measly 5% of dollar sales.

But, that high number of low income sales is what’s introducing many consumers to the world of drones. So, while it seems like it’s really not worth their effort, they do drive sales of more expensive drones.

If you needed more proof that drones were here to stay, the FAA told Engadget that there are now more than 770,000 registered drone owners in the USA. That’s more than double the number of manned aircraft. And 100,000 of those signed up in the last three months alone.

So, while you may think the skies are crowded drones already, it seems we’ve seen nothing yet.

Woman receives $117,500 in settlement after being arrested for recording police