We’ve had this video submitted to us by a videographer who wishes to remain anonymous and I can understand why. Even though he followed all regulations (like height, distance from venue and so one) he still got nuked!

The short of the story is that a DJI Phantom Pro 3 got taken down by a balloon (kinda like playing pong, but in reverse). But I think that there is much more to the story than a fallen drone.

If you are wondering what you are seeing, you are seeing a venue from a drone’s view. White helium balloons are released as part of the celebration and the wind changes and carries the balloons into the drone. One of the balloons has its string caught by a propellor and took the drone down. One of the propeller broke on impact, and the gimbal got detached. That drone was definitely not having a good day. 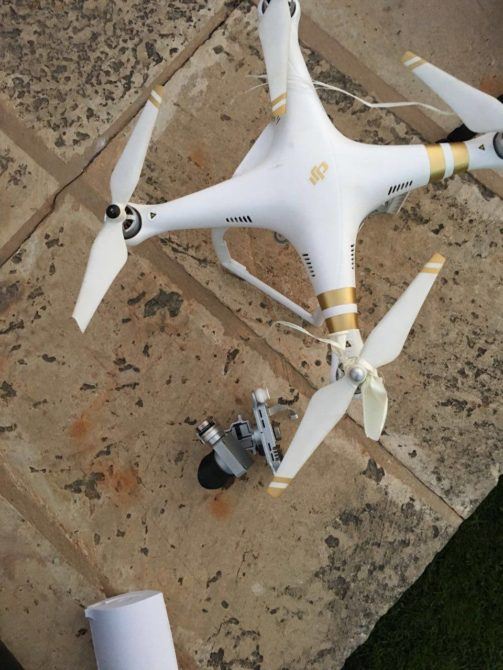 gimbal broke away, string caught in the propeller

You know why this is interesting, because it exposes how little the industry understands about drones. The pilot was ok, the newly weds were ok, the venue was ok, but still something got fundamentally messed up. (no pun intended).

I mean, how could the couple know that the (regulation obeying) drone is sensitive to balloons released hundreds of meters away. How could the pilot know that balloons are in the plan? They couldn’t, not today. And this is a sign of a young industry.

Remember those camera-killing lasers? Many videograhpers have a clause in their contract that if you turn dance lasers on, they will stop shooting till the lasers go off again. I will not be surprised if future contracts with drone operators will include birds, balloons and fireworks coordination clauses.

As for the Phantom Pro, the photographer tells DIYP it was taken to the local DJI store for repairs and is expected a full recovery. The footage up to the fall is likely to make the wedding video.

P.S. The drone is now resting in the recovery ward. You can send it flowers, but please avoid balloons.