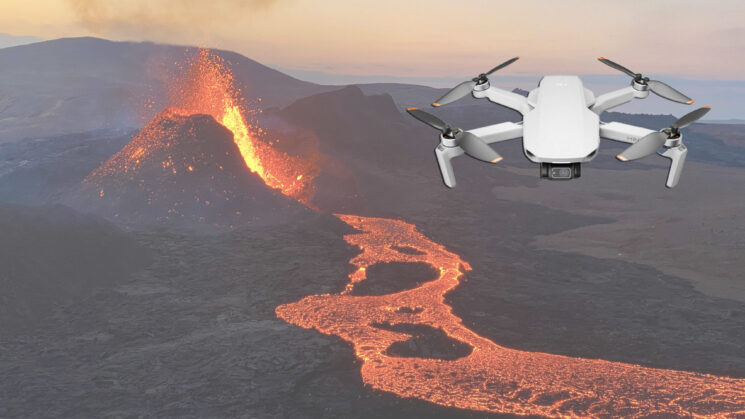 We’ve seen quite a few close encounters between drones and active volcanoes. Some drones survived, some didn’t, but this little DJI Mini 2 has quite a strange fate. It entered an active volcano and survived filming it without any trouble. But then, on its way back – a tree almost finished it off.

Victor of Sunsets Sweden filmed the video at La Palma volcano in Spain. He used a short break in the volcano activity to fly the drone straight into the crater. And as you can imagine – it looks absolutely magnificent, especially paired with fantastic background music.

Alas, on its way back from the crater, the poor Mini 2 ran out of battery. It got stuck in a tree, on its very top, where it ended up spending the night. The pilot was thinking of a plan for how to retrieve it, so the next day, he prepared a 7 meter (23 ft) long stick fishermen use to collect nets from the water. There were also 100m of fishing net and led, but he ended up not needing them.

In the video published later, Victor shows the “rescue mission.” He reached the drone with the stick and it smashed onto the ground. Thankfully, it fell on its back, so the lens stayed intact. Tough little guy, isn’t it?

I found it kind of funny that this little drone entered the volcano crater and survived without any issues, and a simple tree caused so much trouble. But hey, all’s well that ends well, and the volcano footage sure turned out to be magnificent!

Photographer Melts The Face Off His GoPro In A Volcano; Luckily The Drone Survives