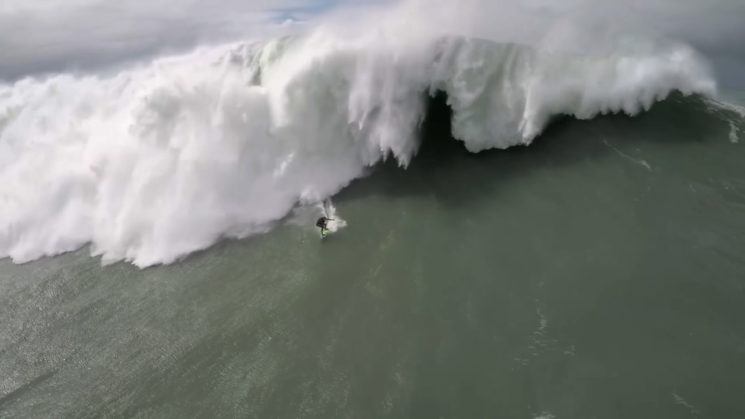 Within just a few short years, drone footage has already become something of a cliché. Sometimes, though, sequences come up that just make you go “wow!”, and this is one of them. At least, it made me go wow. It’s like a scene out of a horror movie, trying to escape the bad guy. He initially catches up and makes a grab, then the rest of it plays out with our heroes running just out of reach, with the villain making close chase.

The footage shot by Maquina Voadora and posted to YouTube by World Surf League shows surfer Pedro “Scooby” Vianna at Nazaré in Portugal. After being knocked off his board by a ridiculously huge wave, a jet ski comes into grab him. It then speeds off, trying to stay ahead of the wave, but then it too takes a tumble.

There’s one thing about surfers. When there’s huge waves coming, you just can’t keep them away. National Geographic reports that he was travelling at around 45 miles per hour on his board, when the 70 foot wave of water came up behind him. And that’s all just part of the thrill.

Nazaré spawns some of the world’s largest waves, and local residents say that the waves can literally rattle the fishing village like an earthquake. With a description like that, I think I’d be keeping my feet very much on dry land. If you’re a bit of an adrenaline junkie, though, here’s some of the biggest waves ever surfed at Nazaré.

Although, drone footage has become a bit too commonplace, it definitely gives a fantastic perspective on things like this. Vantage points that simply wouldn’t be possible otherwise. Shooting from a boat isn’t always practical, and it’s not like you can just float a massive crane on the water. So, it’s exciting to see surfing footage from this viewpoint. If you want to check out some more, see Maquina Voadora’s Vimeo channel.