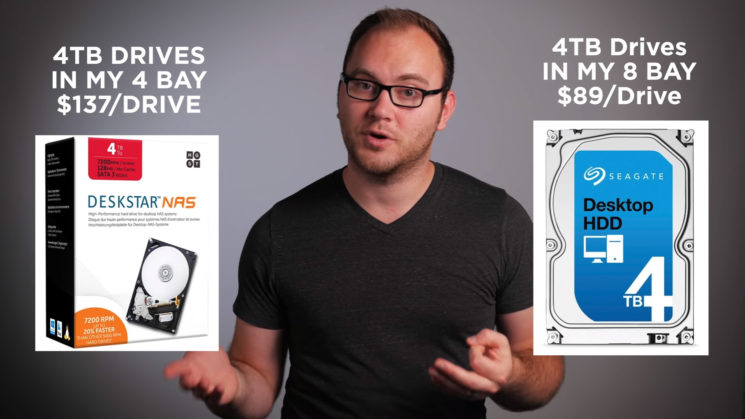 There’s one simple fact about hard drives. They’re going to die. It’s not a question of if, but when. And when it does happen, because it will, there’s two things you can do. The first is that you could panic, research data recovery services and spend a small fortune trying to get the data back. Or, you can simply replace the dead drive and restore from backup.

Personally I prefer the latter option, which means having a good backup workflow in place. Photographers and filmmakers create a lot of data. So, you really do need a good backup solution in place if you don’t want to lose weeks, months or even years worth of work. In this video, Caleb Pike from DSLR Video Shooter talks us through his backup workflow.

Running a YouTube channel, Caleb shoots a lot of footage. There may be three or four takes for each clip we see in a final video. Not to mention countless hours of b-roll. Then there’s all the other assets. Images, titles, project files, audio, and so on, for each job. It’s the same for photographers. If you’re filling up 16GB & 32GB cards every couple of days shooting client work it adds up quickly.

Next to Caleb’s editing rig, he has an external four bay Mediasonic ProBox enclosure containing four 4TB drives configured as RAID5. He likes the RAID5 configuration because he feels it’s a good compromise between speed and redundancy. Of course, RAID is not backup, so it’s just a first line of defense. If one drive dies, it’s fairly simple to slot in another and have it rebuild from the other three. 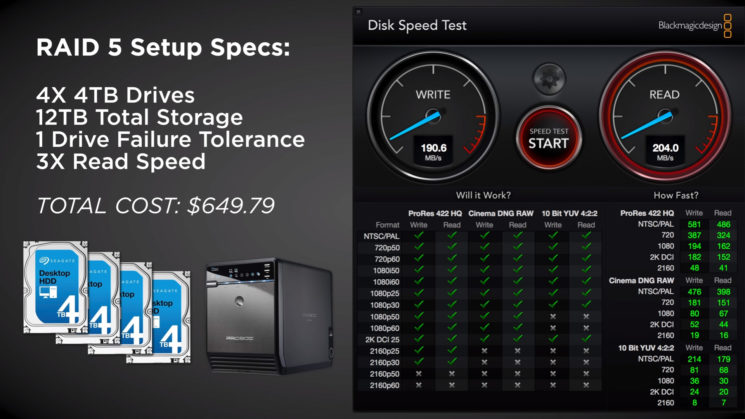 I know there’s a lot of people out there who believe this is the end of it. That their data is safe, but it’s not. As I said, RAID is not backup. So, this is not the entirety of Caleb’s backup solution. This is where current projects are kept for editing. But then they get backed up onto two separate servers. These aren’t anything fancy, they’re just a couple of 8 bay Mediasonic ProBox machines.

The first unit contains 8 4TB drives, also configured in RAID5 for 28TB total storage. The second unit also contains 8 drives, for 28TB total storage, but it’s not configured for RAID. But it is set up to appear as a single large drive from the computer. The main server is backed up to the second server nightly. If the worst happens and the main server goes down, he’ll lose no more than a day’s worth of data. 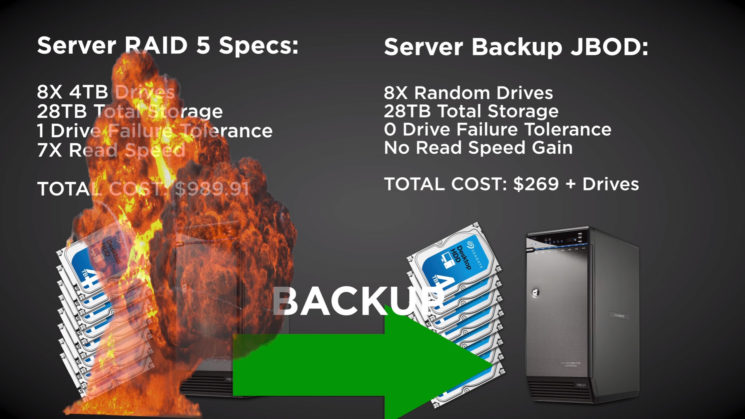 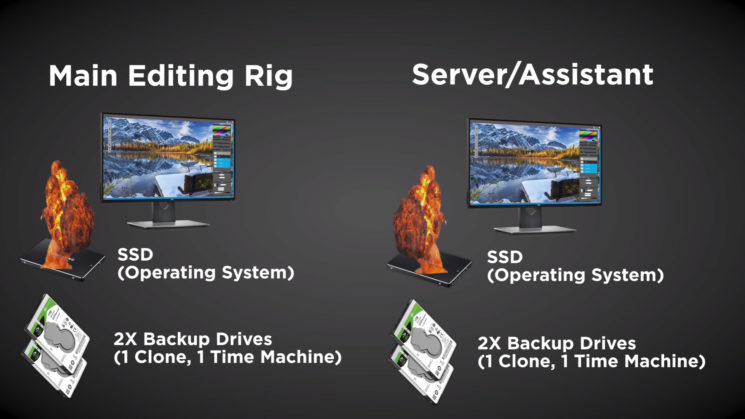 As well as all the local copies, Caleb also uses online cloud backup storage. Specifically he uses Backblaze. For $10/mo, he can back up all of this data online. If something catastrophic happens and he loses absolutely everything, he can call them up and have all his data shipped out to him on a handful of drives. 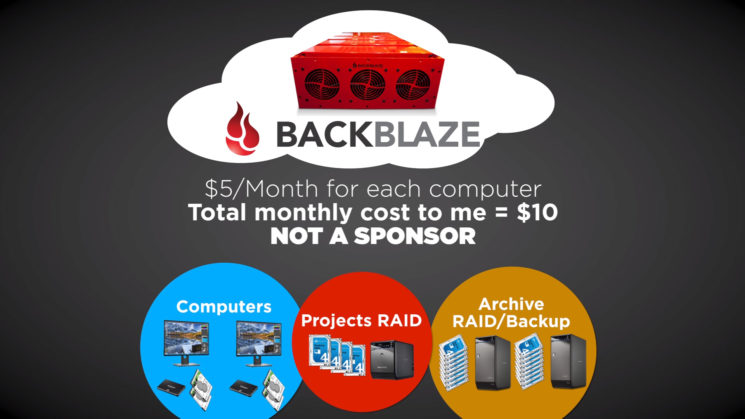 My own solution is similar to Caleb’s, but with a couple of differences. I have a little more redundancy on my editing rig, as I have 12TB internal storage, as well as the external storage. This allows me to have two copies of everything on completely separate devices. Again, RAID is not backup. If one drive goes down you might be able to recover. But if the entire unit fries the drives it contains, you lose everything.

Then I have a separate machine on my network. The data on this backs up across the Internet to another machine. This machine is at a location I can physically access in the event of losing everything here. I know services like Backblaze and others will send you drives, but this is much less hassle for me.

There are many solutions out there for reliable backup, and it’s not something you can really ignore. We hear people all the time talking about losing their phones containing photos of family members who have passed. Photographers with hard drives that have died in the middle of a job, losing a client’s entire wedding, and you’re liable for that loss.

What are those memories worth to you and your clients? Can you afford to take the risk of not having a good backup workflow?