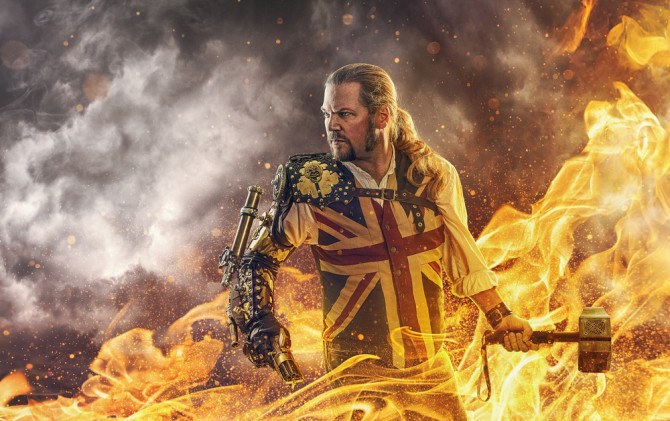 Recently I was wandering around that Facebook thing because it is the ultimate procrastination tool. I can’t say I remember what I was putting off, but I’m so glad I was.  Through a series of countless random clicks on god knows what links, I wound up on an event page with an open invitation to a steampunk studio photography weekend at Omni Lens Studios.

“Hmm this seems interesting, ” (Robert thought to himself). “Oh dang, and it’s only half an hour from here…” I clicked the “I’m Interested” option which kept me in the loop without actually committing to anything. Then for the next several weeks I would check back in periodically to quietly stalk the various attendees, photographers, makeup artists, and models – you know, typical internet creepin.

I was sort of on the fence about whether or not to attend. Clearly I was interested because, well, I did check the “I’m interested,” plus I kept coming back to the event page to see updates and do more Facebook sleuthing. However, I started to suffer from a terrible case of the “What ifs.” What if it’s weird and uncomfortable? What if I’m not feeling inspired? What if I pay to go to this thing and don’t get any pictures I’m happy with? What if I can’t figure out how their lights work and look like an idiot in front of all the other photographers!? WHAT IF WHAT IF WHAT IF!!! I had all these silly questions gallivanting around in my head. Sometimes life will present you with wonderful opportunities to grow as an artist; when the right ones come along you shouldn’t let them pass you by because of nerves. No what ifs, no excuses. What if you stop “what-if-ing” and get your butt in the f-ing car Robert! 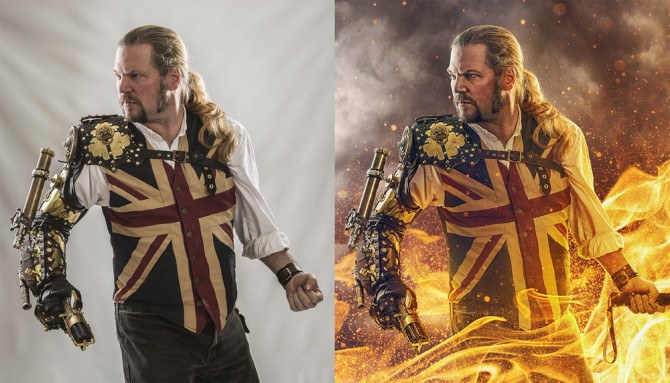 I like to consider myself to be a fairly confident person, especially when it comes to my artwork, but for some reason this event had me all befuzzled. I think it was because I was going to be arriving at an unfamiliar space, with unfamiliar equipment, unfamiliar people, in an unfamiliar town I’d never been to. (Everything was unfamiliar if you missed that.) To top it all off, from my careful research (aka Facebook stalking), it became apparent that MANY of the attendees were already great friends who had worked together loads of times. So there I was, this random guy who accidentally stumbled upon an event and was boisterous enough to think he could invade the cool kids’ party. Ok, let’s be honest it wasn’t technically the “cool kids” party per-say. It was more the “artsy weirdo nerdy D&D” type kids’ party ….. but in my book I guess that’s pretty darn cool. 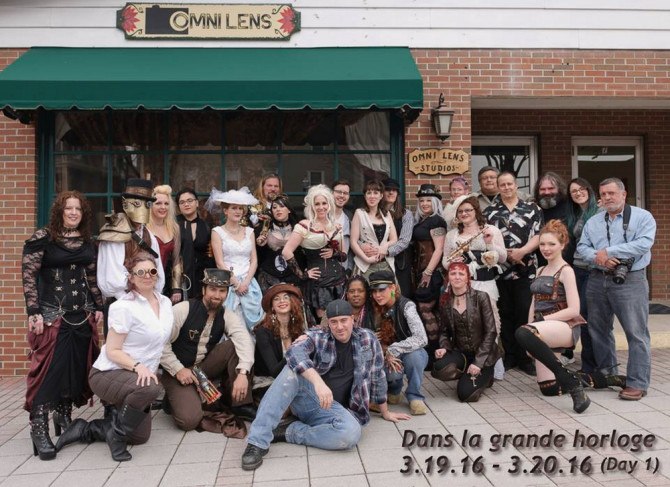 What the heck was I afraid of!? THESE ARE MY PEOPLE! If you haven’t realized this yet, I’m kind of a weirdo nerd type kid myself and don’t really care who knows it (or I probably would not have just typed that). So while teetering on the fence, lost in a category 5 what if storm, deciding if this event was worth giving up my entire Saturday for, my wife Sara slapped some sense into me. (No actual slapping occurred.) “Robert, why wouldn’t you want to take a bunch of photos of people already in costume, hair, and makeup? It’s well worth the money, and you’ll network with a ton of people who are clearly into the same sort of things that you are, and all within driving distance. It sounds like you’re making excuses not to go, but there are about a million more reasons why you should.” (Not her actual words, but something like that.) 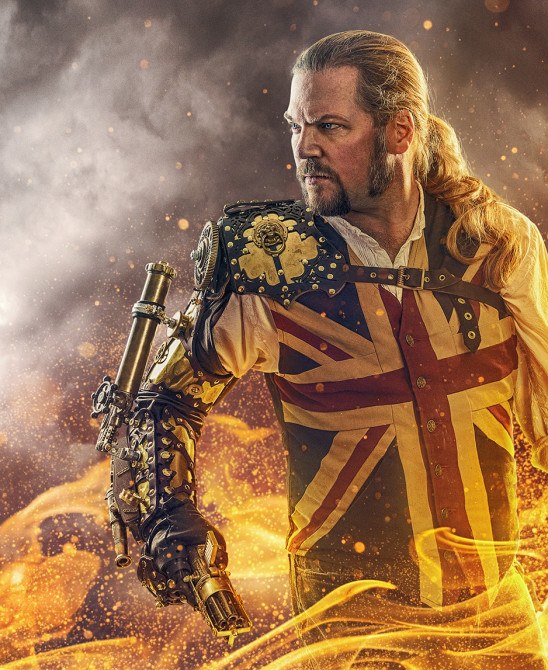 So after taking a step back and realizing I had NOTHING to lose and everything to gain, they announced that Thomas Willeford would be there. That’s it; I was totally in. For those of you who don’t know, Thomas is an author, artist, designer, maker, builder, and all around badass steampunk personality. He literally wrote the book on steampunk, and is seriously so talented. I mean just look at that freakin’ mechanical arm!!!?! Some of his steampunk artistry can even be seen in a episode of ABC’s “Castle,” strapped onto Nathan Fillion himself! (All hail Captain Malcolm!!) 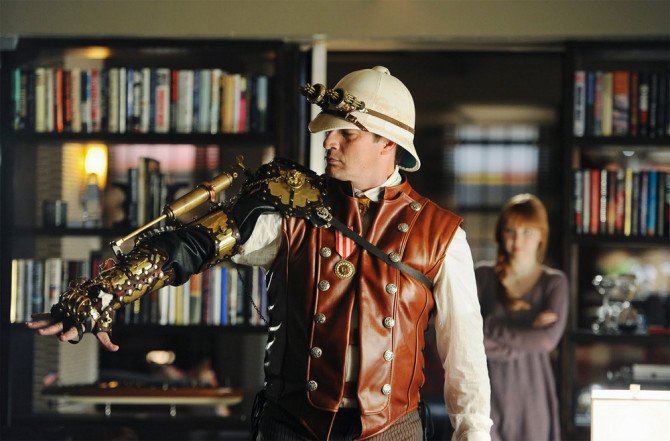 Not only is this arm obviously-incredibly-amazingly-awesome, but it’s actually just a tiny piece of his full-body steampunk Iron man costume! (WHAT!?) So needless to say (even though I already kinda said it), Thomas is a pretty stinkin cool dude. Did I mention that he was a judge on the show Steampunk’d? Cuz he totally was. (Which I recommend binge watching at your convenience.) The list of reasons why I was so excited to meet/shoot with him goes on and on, and I have to say he seriously delivered. Not only is he just a really fun wacky guy to hang out with, but he definitely knows how to model. At least if you’re trying to create something super kickass, that is. 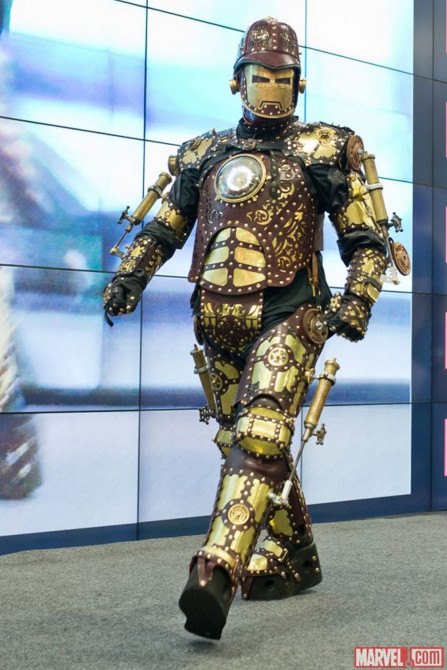 I have a TON of other images of Thomas in all kinds of crazy poses that I’ll edit eventually, but for the first one I wanted to create something super epic, yet “simple” (for me at least), that captured his inner (and outer) badass-ery. So the obviouschoice was clearly to have him charging effortlessly out of rolling flames. Duuhh. I used images form this set of fire and sparks to create the effect, and I’m not going to lie I’m so happy with how it turned out. I wanted to construct basically a wedge shape of fire to compositionally create more motion and lead your eye through the image.

So what’s the moral of this story?  Don’t let your nerves get the better of you! “What ifs” are pointless. Here’s a WHAT IF for you: What if I had let my nerves get the better of me and missed out on such a fantastic day of shooting!?!?!?! You never really know what’s going to happen unless you take the leap. If an opportunity arises to gain access to people, props, makeup, and costumes you might not otherwise have a chance to utilize …. well, JUST DO IT! Try new things, meet new people, and dive head first into something that gives you butterflies. All that can happen is growth as an artist in one way or another. Even if that weekend was a terrible awkward experience I would have learned from it. Thankfully it was SO much freakin fun! Everyone was incredibly welcoming and cheerful. I met loads of incredible artists of all kinds, and I took more fantastic images of steampunk characters than I could have ever hoped for. My portfolio is going to be overflowing with steampunk awesomeness!

This guy stole an iPhone and posted a selfie to victim’s Instagram
« Creating cinemagraphs for the beauty genre
How to make the world’s cheapest flash diffuser for only $0.02 »