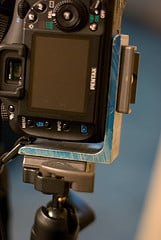 In the following article Trevis Thomas (Flickr) shows us how to make an L-bracket – A useful Tripod mod that allows you to mount your camera vertically on the tripod.

I was in the market for a new joystick style-ball head and I thought that the design of the head would be limiting if I wanted to shoot with my camera in portrait orientation. Then I remembered watching a pod cast by Scott Bourne where he showed his camera mounted to a fancy L-Bracket. I thought that that would be the perfect solution and went on the hunt for a custom bracket for my Pentax K20D.

The cheapest one and honestly the only one, that I could find was the one by Kirk Photo. The thing looks great but its 130 dollars. I couldn’t see spending that much on the L-bracket. I mean that’s more money than I planned to spend on the head.

After posting a thread to the twipphoto flicker group asking for other options, nothing turned up. I did find out that Bogen makes a generic L-Bracket (called Bogen – Manfrotto Junior Elbow Bracket) but its 60 dollars and it looks enormous. I really didn’t want a bracket that covered my battery door. Having to remove it all the time would be a pain.

I wasn’t content with the idea of spending 60 to 130 dollars for what is basically just a piece of aluminum with a couple of holes in it. I guess I have Scott to thank for this because he mentioned that there would be a lot of cost involved with making a custom design and using a milling machine to fabricate a custom bracket, which is true. But the more I thought about it the more I realized, that I don’t really care that much what it looks like as long as it does the job, fits my camera and doesn’t block my battery door. The wheels were in motion to figure out what I could do and how cheaply I could solve the problem.

After some Google searches I found this cool site called speedymetals.com who said that they would sell any quantity of metal I needed. No matter how small.

The metal cost about 14 dollars with shipping. Actually the metal was only a few bucks the shipping was like 11 dollars of the cost. When they say speedy they’re not kidding. I had my metal in less than 5 days. For my 14 bucks this is what I got: 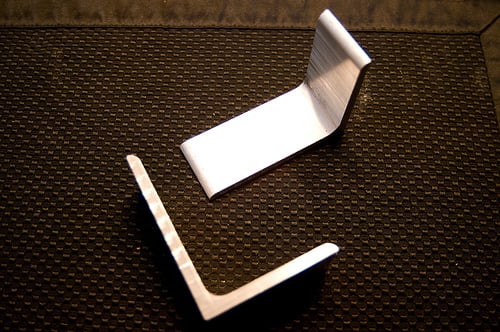 My simple design was to drill a 1/4 inch hole through the long part so that I could run one screw through my Bogen quick release plate, through the metal and into the camera’s tripod mount. And then tap a hole in the short side threaded to 1/4-20 (standard tripod screw mount size and threading) so that I could screw another quick mount plate on to the side of my camera.

To do this I needed to buy the tap and a taping tool. That cost about 11 dollars or so from Home Depot. 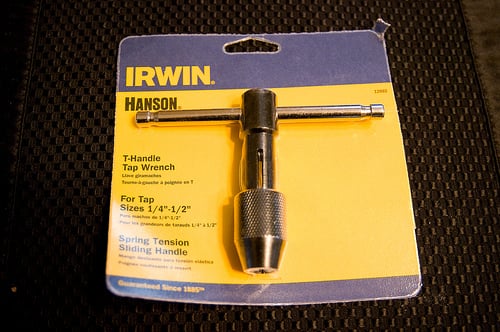 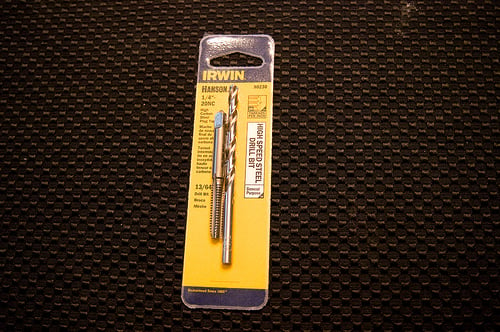 To connect the quick release plate through the 1/4 inch piece of aluminum into the camera I needed a longer screw. So I got two 5/8 1/4-20 screws (about 98 cents, also from home depot) 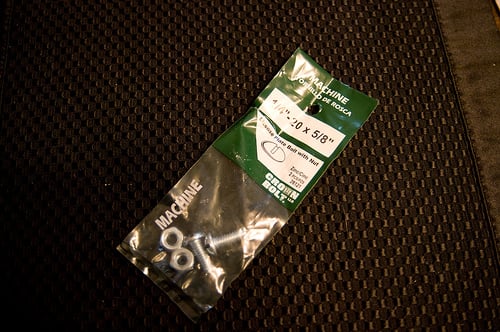 To help the metal resist slipping, and to protect the bottom of my camera, I decided to attach some rubber to the part of the bracket that would make contact with the camera. My wife had a brilliant idea and suggested the rubber from a bicycle tire repair kit. So for another two dollars I got a kit like this: 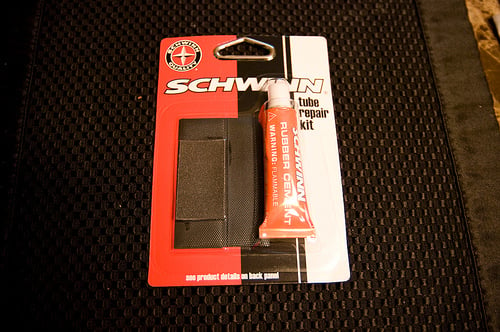 I don’t have ready access to a drill press and I didn’t have an appropriate clamp either. And since I wanted to do this as cheaply as possible I took some scrap wood and fashioned a little wedge to hold the aluminum still. Basically I took two thin strips of pine and attached them to a piece of two foot long piece of 2×10, 1-1/2 inches apart so that I could drill into the aluminum without it spinning around. After reading a blog post on how to use the tapping tool I went into the garage and 30 minutes later I had what I wanted, an L plate for less than 30 dollars.: 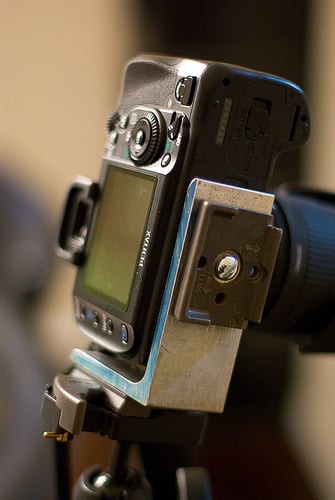 Well actually I have the material to make two of them, and if I want to make more they would cost even less. If I could find a local place to buy the aluminum I could actually make more of them less than 5 dollars.

To mount the Bogen 3157N Quick Release Plate this way I needed to remove their handy thumb screw and attach my much longer screw so that it would be long enough to go through both the QR plate and my L-Bracket. The 5/8 inch screw was the perfect length. If you look at the 3157N plate you’ll see that their screw is held in place by a C-clamp. Just pop that off and the screw will fall right out allowing you to insert whatever screw you want. I’m still looking for a 5/8 inch long 1/4-20 thumb screw but so far I haven’t found one. That would make this even nicer since I could remove it from the camera without any tools.

It’s not going to win any beauty contests but, hey, it works! And now I can spend my money on other, far more difficult to fabricate gear like a monopod and a joystick head…