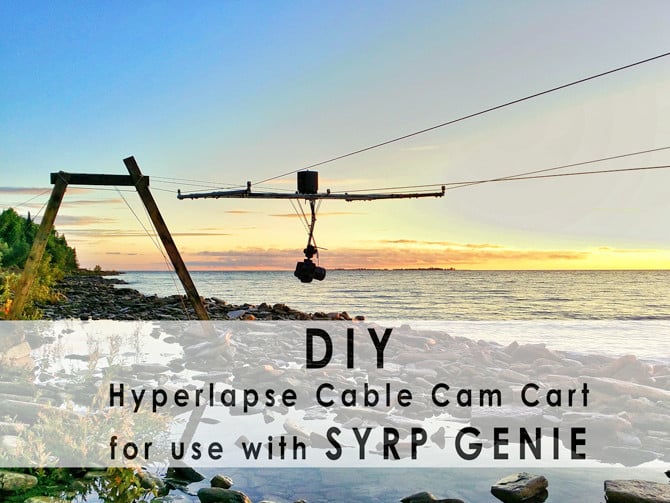 One of the most versatile and useful products on the market today for time lapse and live action video motion control is the Syrp Genie (Amazon | B&H).

To me, the biggest capability of the Genie that separates it from other time lapse and live action motion control devices is its ability to run long distance cable cam shots – there is no other device on the market that can do this.

In this article, I will share the details of my DIY hyperlapse cable cam cart that I built for use with the Syrp Genie.

This video is a quick overview of the entire cable cam cart build.

There are two things you will need to build to get a Syrp Genie mobile on a cable cam.

For the cable cam cart, I used hockey stick shafts for the main members.  Hockey sticks are strong and lightweight (most are composite), and free (you can usually find broken sticks at arenas).  If you don’t have access to hockey sticks, some small straight pieces of wood would work just as well – although this might make your cart a little heavier.

The remainder is a mix of common hardware store odds and ends and some scrap wood. 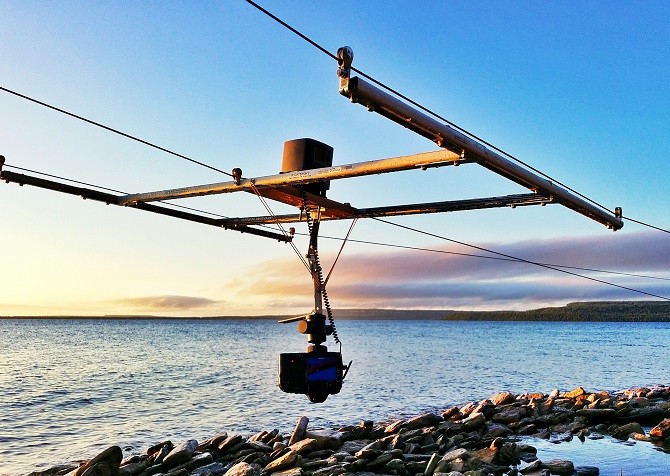 For the support cables, I used one continuous length of 550 paracord (purchased in a 1000 foot long spool).  This was the most inexpensive option I could find for a cable that would be strong enough (rated to a load of 550 lbs).

However, in hindsight, the nylon paracord is actually pretty elastic – especially over long distances.

Spending a little more money on a non-stretch kevlar rope might have been a better investment.

Because I was setting up a cable cam run over flat ground, I also needed to build a support structure.  This was made out of scrap lumber and anchored down with rope guy wires tied to large rocks (with more large rocks piled on top). 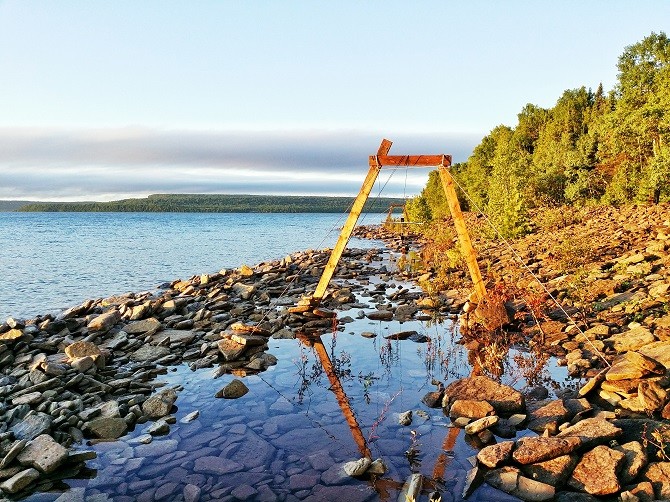 The drive cable that the Genie uses to pull itself along is a 100m long non-stretch kevlar rope from Syrp.

The paracord happened to have the same diameter as the proprietary Syrp rope – so it did work as a drive cable in a pinch – but because of the stretch in the paracord, it didn’t work nearly as well.

Finally, I used a hockey stick and set of pullies as a spreader and tensioning system at each end of the run.

You can build this project with common hand tools – all you need is a hand saw, drill, screwdriver and wrench (or socket).

I used a radial arm saw, a drill press and a Dremel with a rotary cut off wheel too – because I had them available and they made my work a little easier – but just hand tools would have been fine.

I also had to find someone who could weld the two fence hinges together for me. 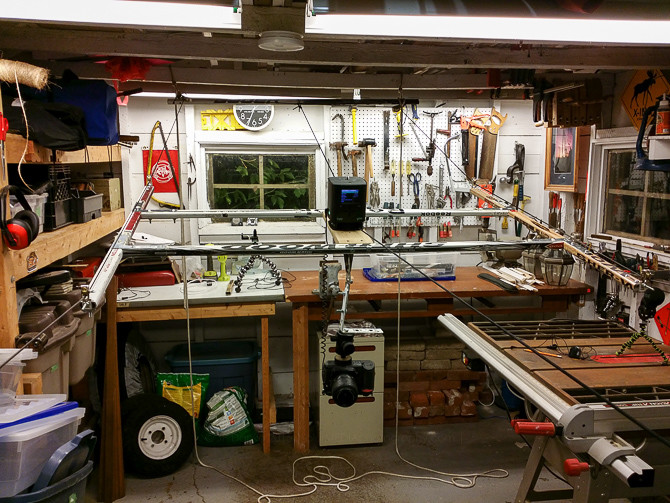 Basically, the larger your cable cam cart, the more stable it will be.

However, there is a tradeoff between size and weight – the cart needs to be small and light enough that the Genie can pull it along without stalling.

The cart I built is 40″ long and 42″ wide – which was largely governed by the lengths of the hockey sticks I had available and what would fit in my car. 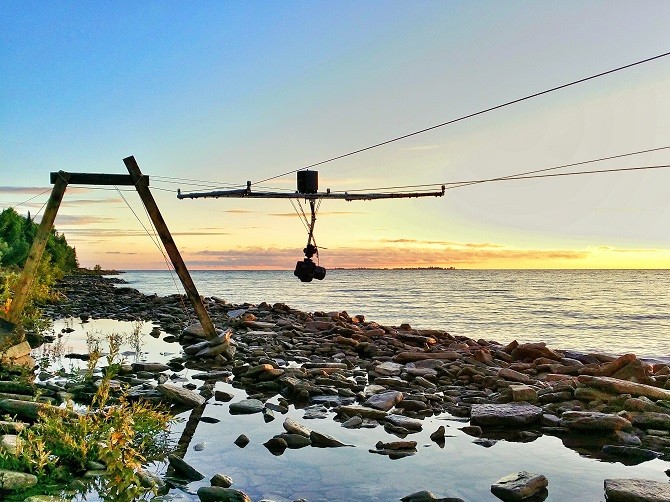 With this size of cart, the Genie was able to pull it along on a straight run, and even up a slight incline.

Going downhill, or on a vertical run straight down also worked fine.

I think this setup could also be modified to go straight up vertically with the use of a counterweight.

For a long flat run over level ground (like I did), the support cables need to be very tight.

They also need to have (nearly) the exact same tension in both cables.

To do this, I used a continuous length of cable that runs through a set of pulleys at each end.  This way, both cables will always have the same tension – but I only have to tension the system at one end.

For tensioning, I used a small boat trailer winch – over a level run this long, I couldn’t get the cables taught enough by hand – so I had to use a little mechanical advantage. 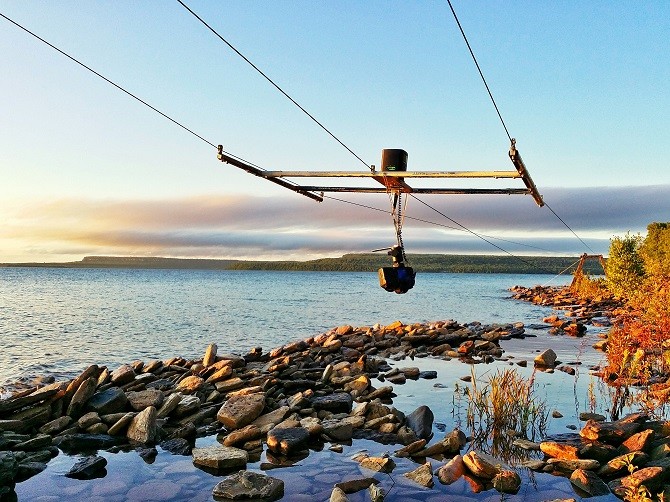 The biggest issue with running a long distance cable cam time lapse sequence or live action video is keeping the camera as stable and consistent as possible between frames.

If you run a very long distance run the orientation of the camera changes quite a bit from end to end no matter how tight you try to get the cables – it would be going downhill at the beginning, level in the middle and uphill at the end.

To take some of this variation out of the system, I used two fence hinges to build a universal joint that would allow the camera to pivot in two directions, but not rotate.

I cut a slot in one hinge and then welded them perpendicular to each other.

With this universal joint and by mounting the camera underneath, gravity keeps the camera relatively level as the cable cam cart travels along the cables.

However, I did notice that with the shoot-move-shoot action of the Genie, the motion of the cart introduced some swing into the camera.  To combat that, I used a couple rubber bands as dampers. 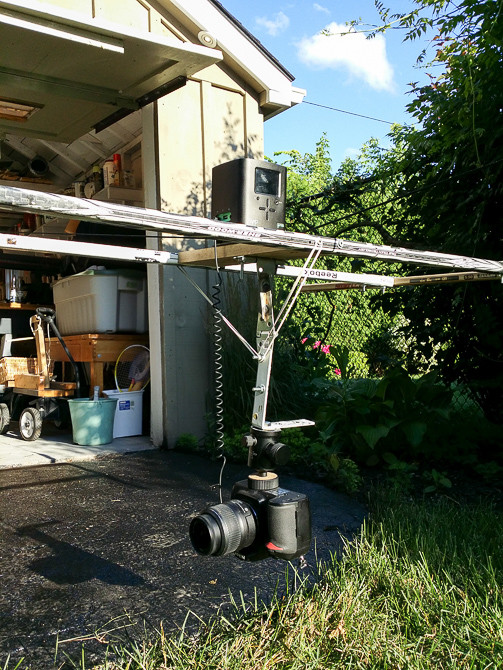 The hardest part about the setup was getting the cables into place.

With a 200 foot long run (61m) it is quite a bit of hassle to string a 400 foot long rope from end to end without getting it tangled up and snagged on rocks and bushes all over the place.  But, once the cables were in place, I left the rig up and in place for three days so that I could film a few sunrise / sunset sequences with the same setup.

One thing I noticed was that the center cable (that the Genie uses to pull itself along) has to have a little slack in it or else the friction on the pulleys that go through the Genie’s spool would cause the unit to stall. 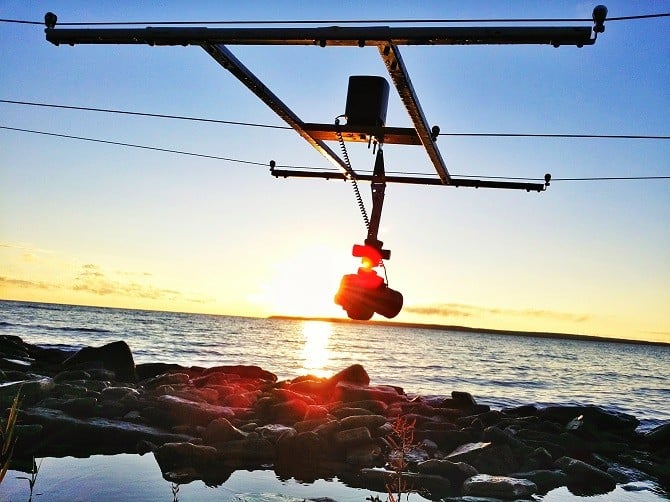 No matter how stable your cable cam rig is, there is going to be some movement and inconsistency between frames as the cart moves along the cables – meaning that post production stabilization of your footage will be required.

This led me to a major problem that I was not expecting.

Because I was filming a lake shore, with waves, an indefinite horizon and lots of round rocks in the foreground – Warp Stabilizer had a hard time finding high quality tracking points.  Compounding the problem is the fact that the camera is traveling a very long distance over a long period of time – meaning the shadows and perspective change significantly from end to end and there are no stationary reference points in the frame from start to finish.

In fact, it was so bad that Warp Stabilizer actually made the footage worse – so I had to resort to manually stabilizing the horizon using manual tracking points – and no matter what I did, I couldn’t get it perfectly stabilized.

I also realized that it was important to shoot many more frames than I did.

Over the 200 foot run, I shot about 800-900 photos per sequence, which was based on a desired run time of around 30 seconds at 24 or 30 frames per second.  At that frame rate over such a long distance the motion appears a little too fast for my tastes.  In hindsight, it would have been better to take two or three times the number of individual photos at a much closer interval so that the footage would be more consistent from frame to frame.

This was a really enjoyable build.  The Syrp Genie (Amazon | B&H) is an extremely versatile tool and I am really looking forward to using this rig for a whole bunch of other projects.

It is quite a bit of work to setup and run in the field, but that is the price to pay for creating footage that is as unique and interesting as long distance cable cam sequences can be.

If you decide to build your own DIY hyperlapse cable cam cart – we’d love to hear about it – be sure to leave a comment below.

Or, if you have any questions – leave a comment too!

How To Build A DIY 2 Axis Cable Cam

« Blacks Photography is Shutting Down; Closing All 59 Stores
Leica Q Camera App Already Available; Camera to Be Announced Within Hours »