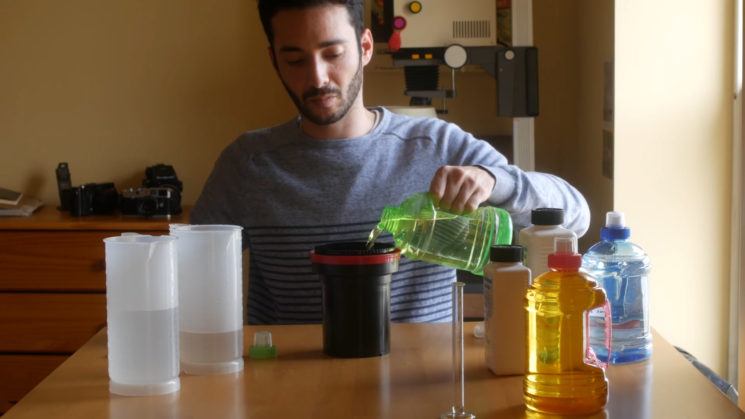 There are as many techniques to develop black & white film than there are photographers.

Today I’m going to show how I develop most of my B&W films. That doesn’t mean that’s the right way to do it and that you should follow my instructions word for word. This is just what works for me until now.

When a film has been exposed to light, the image exists but is invisible and it has to be revealed. If you look at a negative exposed you won’t see anything until it has been developed. This what we call a latent image.

The combination of film/developer, dilution, temperature, agitation etc… will all affect the look of a negative. For an image to be revealed on the negative there are 3 essential steps to follow:

This is the most crucial step in the whole process as it will determine the look and quality of your negative. You can find a lot of different developers and each of them has its own characteristics. Some will have a fine grain, others low or high contrast for example. They exist in liquid or powders that need to be mixed with water.

The agitation sequence will also impact the contrast and grain size. If you want a low contrast image and finer grain with a maximum of information in both highlights and shadows you can reduce the agitation. On the other hand, if you prefer a contrasty image and don’t mind a bigger sized grain you can agitate the developing tank more frequently than recommended.

Temperature is another factor that can impact the negative. Colder temperature will require extend developing time and higher temperature the opposite. For consistent results try to always stay around the same temperature. For me 20 degrees celsius has given me satisfying results.

Once the development is done, you can discard the developer as it’s a one time use unless stated otherwise.

Again, it’s all about finding what works for you. For now I’ve been using RODINAL and ILFORD DD-X which are both very good. Don’t be afraid to experiment and try different agitation sequences or developing time.

It’s almost impossible to mess up a black and white film and I never encountered major problem (except when I didn’t load the film properly in the camera!).

When the development time is over, we need to deactivate the developing agent with a stop bath. Most brands make their own but they all do the same thing and won’t affect the image look to my knowledge.

I use the ILFOSTOP from Ilford. You get a bottle of pure solution that needs to be diluted in water. This a reusable solution that can last several months so keep it in an airtight bottle when you are done with it.

If you are on a budget you can even use tap water. Usually, 1 minute is enough to stop the development process.

Before the film can be exposed to light it must be fixed. This is the step that makes the image permanent on the negative and it also get rid of the unexposed silver halide particles. Mine is the Rapid Fixer from Ilford too. It’s another solution that needs to be diluted and can be reused several times.

Once the fixing is done, the film must be rinsed for thoroughly in clear water to remove all the chemicals from the negative.

Again it won’t affect the look of your negative so don’t worry too much about the brand of fixer you’ll choose from.

After rinsing your film, you can finish the process by putting your film in a wetting agent. This is not necessary but recommended to avoid water marks when the film dries. This is also a solution that can be re-used.

The most commonly used is probably the Kodak Photo-Flo but there are other good ones that will do the same job.

Some photographer prefers to use instead water with a drop of liquid dish soap. I haven’t tried this myself so I can’t really tell if it works the same but it seems to be a popular alternative.

Now that we know how to make the magic happens, let’s get started!

For today we are going to develop a 35mm roll of FOMAPAN 100. This is a very cheap film in price but not in quality. I often recommend this film to anyone who wants to get started to shoot black & white without breaking the bank.

To develop our film we’ll use the RODINAL developer (also know as R09 or ADONAL). It was initially manufactured by AGFA who sold the production site to another company a few years ago. If you want more info, check out this Wikipedia article.

The advantage of using this developer, on top of its fantastic properties, is the low developing cost. The dilution is very high and it has a very long lasting shelf life. This is ideal if you are just developing film from time to time so you don’t have to worry about it getting spoiled.

Now hang the film with film clips and let it dry for at least an hour in a quiet place. The film surface is very fragile and can be scratched easily when it’s still wet so wait until it’s completely dry before manipulating it.

It’s simple as that!

All the images used to illustrate this article were shot by Daniel Breen on my Xpan. He is the one who’s been helping to record the videos for the Youtube channel. To discover more of his personal work check out his Instagram.

That’s all for todays guys! As I said in the beginning, there are infinite ways to develop film. I’ve just shared with you one technique that works for me but there are many more to explore. For example you can play with the “Stand Development” technique as I’ve discussed before.

I hope you enjoyed this article and that it could give you an idea of how easy it is to develop black and white film. Once you are confident with this, I suggest to try developing colour film too. It’s not as challenging as it seems!

How to develop film with beer
« What does it really mean to be a professional photographer?
Shooting portraits with flash vs natural light – 3 setups in 3 minutes »