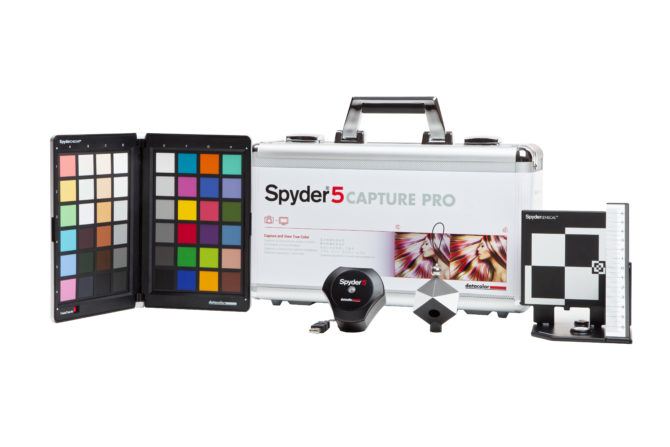 Bundles are good. We like bundles. Especially when they contain a bunch of items that are actually useful. One such bundle is the new Spyder5CAPTURE PRO kit by Datacolor. Based around the Spyder5ELITE monitor calibrator, it seems to offer a complete solution from capture to computer.

The kit also includes the SpyderCHECKR, SpyderCUBE and SpyderLENSCAL. Bought separately, this would cost around $425, and if you care about colour accuracy would be worth every penny. But right now, a special introductory price means you can everything for only $269. When you consider that the Spyder5ELITE costs $265 just on its own, that’s a hell of a saving.

Profiling and calibrating monitors has become quite commonplace recently. Many photographers at least know what it is, even if they’re not actually doing it. Only the highest end monitors have reliable built in calibration, so the rest of us need a little something extra. This is where units like the Spyder step in.

I’ve used both Spyder and X-Rite i1Display units over the years to calibrate monitors. The difference between “standard” and calibrated is night and day, regardless of which you go with.

When you’re working on an uncalibrated display, you never really know what the colours are. This is why many complain about labs sending back prints with crazy colours. The labs are just printing the colours you told them to. It’s you who wasn’t seeing them properly on your monitor.

Calibrating your monitor is only one step of the process, though. You also need to profile your camera. Different sensors and the IR and other filters placed on top of them, respond differently to different colours. This is why you often hear that cameras from Brand X produce better skintones than Brand Y. It’s also why the opinion seems to flip-flop every new generation of cameras.

Colour targets allow you to profile your camera so that no matter what brand your camera, you’re getting accuracy every time. Even putting different brands and models side by side, once profiled, it’s virtually impossible to tell which image was shot with which camera. I’ve tested this myself with a dozen different Nikon, Canon & Hasselblad bodies.

I do have a favourite here, though. I’ve been using the X-Rite ColorChecker Passport for a number of years. It’s worked absolutely flawlessly for me. I know a number of people who use Datacolor’s SpyderCHECKR who are equally as satisfied. The only reason I haven’t tried the SpyderCHECKR myself is because I haven’t had a need to.

The process for either is pretty much the same, though. Take a shot of the colour target under the same lighting conditions as your subject. Then bring it onto the computer and run it through a piece of software or plugin to generate a profile. Finally, apply that profile to all the other images shot using the same lighting setup. All the colours get corrected at once giving you a consistency throughout your session.

For me, camera profiling is essential. I’ll shoot some projects weeks or months apart in different locations with very different lighting conditions. But what comes next?

Well, even if you’re shooting raw and nailing your exposure every time, some light is more or less contrasty than others. The harsh bright sunshine of a clear blue day is far more contrasty than a white cloudy sky, for example.

Video guys have used brightness targets for years to set their exposure and contrast, but these seem relatively new to most photographers. I use a Lastolite Xpobalance, for this, and have done for years. I started using one when I regularly did video work, and it comes on every shoot with me. On one side is black/white/18% grey, and on the other side is 18% grey, +1 & -1 EV. It’s handying having something that you can fold up and throw in a bag, but it is fairly limited to shooting portraits. You need somebody to hold it.

The SpyderCUBE can be suspended, put on a light stand or stood on a flat surface to give you the same result. It has black, white and 18% grey swatches on multiple sides, as well as a “black trap” for pure blacks. It’s also pretty small, easily fitting in your pocket.

The final piece of the puzzle is something I’ve tended to slack on. Most of the time, it’s not made much of a difference for me. I shoot at f/8, I get a lot of depth of field, so if my camera back focuses by a few millimetres, you can’t tell. Lately, though, I’ve been shooting at much wider apertures and back & front focus issues quickly become obvious.

I recently picked up a couple of new DSLRs for video and behind the scenes stills. Even stopped down to f/8, you could tell they were way out. I wish I’d had one of these a couple of months ago, at the time I attempted to AF fine tune them. I’m still not convinced these bodies are spot on.

While cameras like the Nikon D500 may be making this process a little obsolete, that is only one camera. The rest of us still need to AF fine tune “the old fashioned way”.

It’s a nice and complete kit, and the current $269 introductory price makes it a tough bundle to beat. If I didn’t already have X-Rite & Lastolite gear, I’d be all over this. Although, I am curious how the two setups would compare side-by-side.

What do you use for monitor calibration or camera profiling? Do you even bother with it? Has the reduced bundle price convinced you to finally start? Let us know your thoughts in the comments.