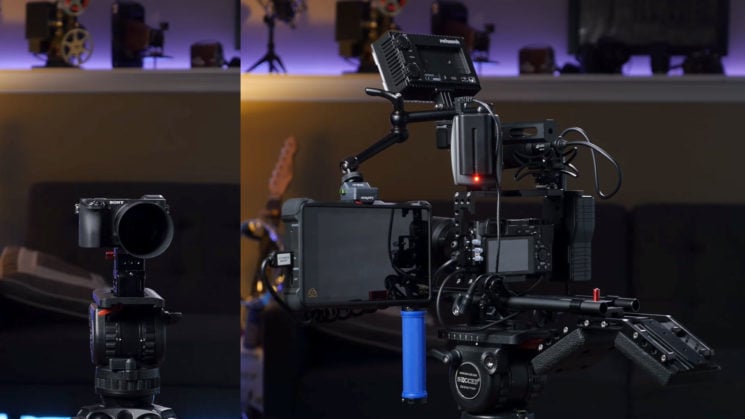 If you shoot video with DSLR or mirrorless cameras and you want to get serious, you really should consider a shoulder rig. They basically turn your camera from being Bruce Banner into The Hulk. You get so much more stability, capability and control. They’re more versatile and dynamic than a tripod or even a monopod. But they’re also often expensive.

Filmmaker, Tom Antos put together his own DIY rig to turn his Sony A6500 into the perfect shoulder mounted camera. As well as giving you the steadiness and manoeuvrability of a much larger camera,  they also help to overcome the shortcomings of smaller DSLR and mirrorless cameras. Like, decent quality audio, lighting, larger screens and battery life.

If you’re planning to record your sound externally on a separate device, you can cut this shouler rig price in half. All you need to do is remove the Saramonic SmartRig+ from the setup. Tom’s microphone is the Adzen SGM-250CX, and you’d need the SmartRig+ to use this as it’s an XLR mic. But, for separate recording you could use something like a Rode VideoMicro to get clearer on-camera sound for easy syncing.

Tom’s screen is the Atomos Ninja Inferno 7″ 4K HDMI recording monitor. It’s attached simply with a magic arm and quick release. This allows him to remove or attach it at will quite easily. A small Neewer LED light is attached to the top of the rig to help provide some supplemental lighting.

Dummy batteries are also available for other cameras, such as Nikon and Canon. You don’t have to use Sony NP-F batteries, either. You could go with a unit like the Tether Tools Case Relay and USB batteries.

That’s the great thing about custom shoulder rigs like this. You build them up a piece at a time to perfectly suit your needs from component parts. You also often save yourself a lot of money in the process, too, as you’re only buying what you need. With a completed rig purchase, you may find that you end up never using half of the things included.

Depending on your needs, and the equipment already available to you, you can get a basic rig built up for as little as $100. Or, you could spend a couple of thousand.

How to make a cheap, but stylish DIY shoulder rig out of wood