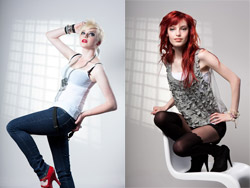 If you own one of them 90’s film cameras and stopped using it because digital is so hip right now, you’re gonna dust it off once you’re done reading this tutorial.

In this tutorial photographer Richard Hill is going to explain how to convert your old film camera combined with a strobe into a background generator (which pros also like to call Cookie Projector or a gobo projector).

We featured a strobe based background generator before, which was based on a box and Fresnel lenses. This time around the shades can be way more delicate. Here comes Richard:

When I set about making my DIY 35mm Cookie projector it was very much an experiment. However the process really is very simple and should be easy enough to follow. Unlike most things to do with a camera I also found that the brute force approach worked best! The specific steps or methods required will also depend on the camera you’ve managed to source. (Please don’t harm any living cameras)

1) Source an old 35mm film camera. I was given an old legendary Canon T70 which wasn’t working so I used that. You ideally want a lens with a large aperture so the final projector is efficient with the light you shine through it. Too slow a lens will eat the power of your flash. Prime lenses are best for this and were a lot more common back in the day so are relatively cheap. I used a 50mm lens but am on the lookout for a wider lens to give a bigger projection.

2) Remove the back door of the camera. As mentioned above there’s no need to be shy about this. Simple get hold of the door and snap it off. Once removed a pair of pliers can be used to snap off any hinges. You might be lucky and find a donor camera with some screws you can remove to get the door off.

3) Next you need to remove the shutter curtain and mirror. I found it best to do this with the lens off. That way you can get to it from both sides. This is one step that might be best to be done by taking the camera apart as you need to make sure the “window” you are left with doesn’t have any pieces of curtain protruding from edges. I used a pair of pliers and simply ripped the mirror and curtain out. Not pretty but it worked.

4) You should now have a camera body with no back and a big hole in the middle. 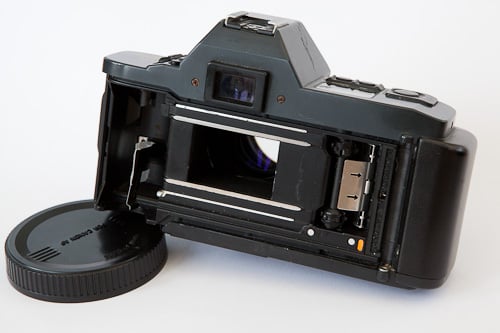 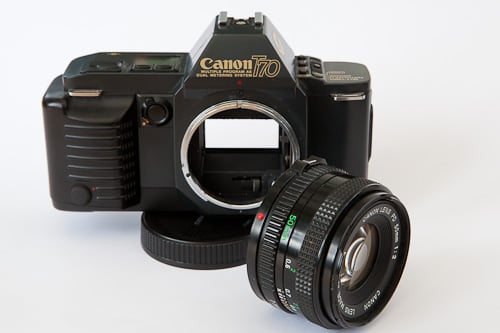 5) Reattaching the lens you can look through the back and see the world upside down.

6) The next step is to create your slide. The first time I used a piece of tracing paper which I carefully drew a grid on using a soft black pencil.

Remember your drawing is going to be magnified hugely so any mistakes WILL show up. Ideally you want to be printing your slides on overhead transparency film. Create yourself a file in Photoshop which contains lots of rectangles on it, within which you can draw your images that you want to project. A film negative is 36x24mm in size. To be on the safe size I created the rectangles 34x22mm in dimension.

7) Once you have printed your transparency you need to cut the slides out. Leave a border around the rectangle which is beg enough so you can attach it over the shutter window with tape but small enough so it lies flush to the back of the camera. 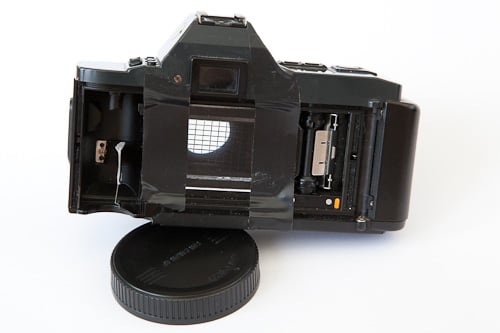 8) Finally to finish construction, you need to attach your strobe to the back of the camera. By twisting the head so it is 90 degrees to the body this is simple enough to do with a couple of ball bungees. 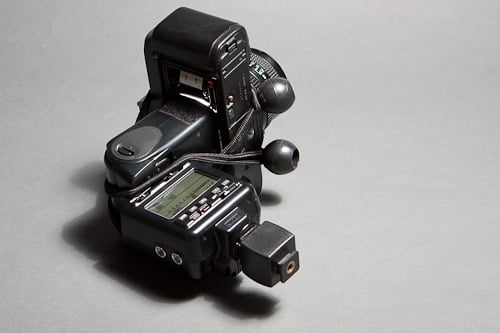 9) The great thing is you can mount your camera projector onto a tripod or light stand using the tripod mount on the bottom of the camera. I used a Manfrotto 026 umbrella adapter on the top of a light stand.

10) Ensuring the widest aperture aim your camera at a wall and attach your flash triggers. Take a test shot of the wall and see your slide magnified and projected onto the wall.

Here is a short video that shows how it looks like on the set (it’s the camera looking thing behind the umbrella. Why an umbrella you ask? Read on after the clip)

A note on focusing. With the slides I was using a bit of blur was actually beneficial in the effect I wanted to create, but you might want to ensure your projection is nice and crisp by focusing your projector on the wall. This can be done by trial and error or measuring the distance from camera to wall and setting accordingly on the lens.

You will notice that your test shot will give a very hard light. With very crisp lines and dependant on the ambient light in the room very black shadows. I wanted to soften my projection so I added an umbrella directly behind the projector to fill in the shadows and create a soft light. Simply ensure the power of the flash into the umbrella doesn’t over power the projector and completely obliterate the projection. 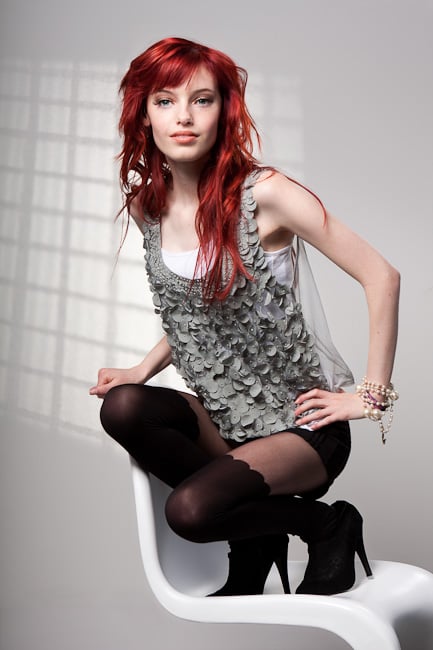 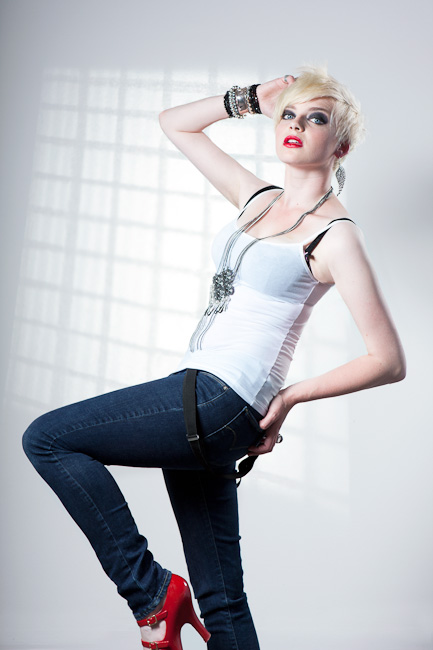 Richard C Hill is a photographer based in Milton Keynes. Shooting many forms of portrait photography from fashion and beauty images through to relaxed portraiture and dynamic sports images.  You can follow his writings here.

How To Convert Scrap Flooring Into A Lens Drawer

Watch this before you convert your camera to infrared