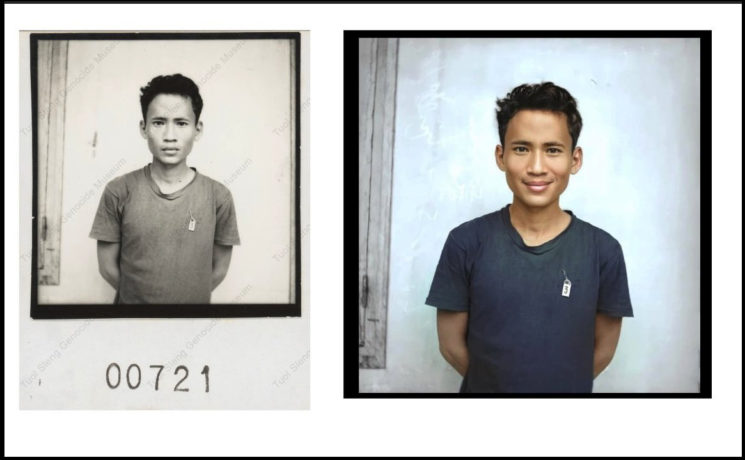 Colorization artist Matt Loughrey recently came under fire for a serious “Photoshop crime.” He shared some of his work with Vice Asia, showing his colorized images of Cambodian genocide victims. But it was soon discovered that he added smiles to them, which caused quite a stir.

Vice Asia published an interview with Loughrey on Friday, 9 April. The article is about his colorized images from S-21 Tuol Sleng Prison, where an estimated 20,000 people were imprisoned by the Khmer Rouge. “Cambodian authorities photographed many of their 2 million victims,” Vice opens the interview. “These portraits, recently colourised, humanise that tragedy.” But is adding smiles “humanizing” too? When asked about people smiling, Loughrey told Vice:

“Out of 100 images I looked at, the data showed that the women tended to have a smile on their face more so than the men. I think a lot of that has to do with nervousness. Also—and I’m making an educated guess—whoever was taking the photographs and who was present in the room might have spoken differently to the women than they did the men. I thought about this time and time again when I was working on them. We smile when we’re nervous. We smile when we have something to hide. One of the classic things is to try to be friendly with your captor. So a smile would seem natural. I’m sure it’s very easy for the oppressor to smile, because they have all the power. And when you see a smile, you may try to mirror it in order to become synchronised with your captor. To make yourself feel like you have some control.”

It’s easy to find original images, which someone apparently did. Tuol Sleng archives are available online, containing thousands of photos. I went through around 100 of them, and I found only one showing a man sort of half-smiling. There might be some photos of people actually smiling among thousands of images, but I just couldn’t find any. And when the public discovered the originals of Loughrey’s colorized work, it turned out that the subjects of them weren’t smiling, either. He was accused of “falsifying history,” with the public urging both him and Vice to apologize.

Matt Loughrey in Vice is not colourising S21 photographs. He is falsifying history: pic.twitter.com/z6J99J7BOE

The Vice article about the guy colorizing Khmer Rouge prisoners and making them look like they’re happy and having a good time is so funny pic.twitter.com/7YoTx1ojz0

A Twitter user Lydia posted a colorized image of her uncle, saying that his smirk wasn’t doctored. However, his story in the Vice article was. “In the article, the photographer, Matthew Loughrey, says that the man in the photograph is named Bora. It also states that he was a farmer, had a (presumably) living son, was electrocuted and set on fire,” Lydia writes in a thread. “We don’t know the exact way in which he died, and there may be a record of that we haven’t seen. But the rest is false: he was not a farmer, but a primary school teacher. It’s impossible for Loughrey to have been in contact with his son, because his only children also died.”

This photo of my uncle, Khva Leang, was part of the project at the center of a recent @vice article. Unlike some of the other photos, I don’t believe this smirk was photoshopped. I have seen the original. But the article tells a false story about my uncle. https://t.co/WUzZjITK8z pic.twitter.com/ek0bHuTvOU

The whole scandal went beyond Twitter. Cambodia’s Ministry of Culture issued a statement, asking Vice and Loughrey to remove the images. “We urge researchers, artists and the public not to manipulate any historical source to respect the victims,” the statement reads. The Ministry even threatens to take legal action if Loughrey doesn’t comply with the request. But the article and the photos have removed from Vice Asia. You can only find the article in the web archives, but the images are blurred.

Many people love colorized images because they feel they bring them closer to historic events. On the other hand, some historians claim that colorization actually draws us further apart from history. Personally, I enjoy seeing well-done and historically accurate colorization work. But adding smiles to portraits of genocide victims is far beyond that and it’s just outrageous.