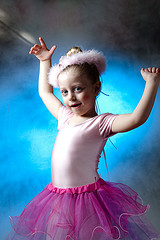 Kindergarten teachers are gods. No really. Gods, I tell you.

I just had a really wacky weekend, where I volunteered to shoot thirty something little hurricanes kids at my daughter’s Kindergarten.

They had a huge custom party and wanted some portraits to remember. As the teacher knows I carry a camera on occasion, she asked. How did I byte into this one could I say no? I’ll post a complete on assignment on this soon. In the meantime, here is a little tip:  How to Child Proof A Lightstand.

For on location shooting I use the Manfrotto 001B 6-Feet Nano Stand. It is light, folds up nicely and carries a strobe with umbrella or a snoot with out making the slightest complain.

It goes up pretty well on one hand, and feels solid on the other hand. Well, at least for indoor shooting.

At least that’s what the little 001B thought until it met a bunch of nose-running-bumping-jumping kids with costumes.

Sandbags were not an option here because of two reasons:

1. I did not have any sandbags with me.

2. Sand bags make great footballs.  Trust me. I’ve been there before.

I did carry some Gaffers Tape. I always carry some Gaffers’ Tape. Actually, I think that if enough people will carry Gaffer’s Tape on regular basis, the world will be cured of all its sickness – it is a miraculous material. 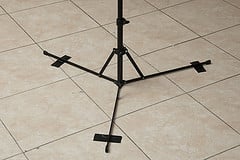 Any way, the solution was simple, I Gaffertaped the 001B’s legs to the floor. Was this Karate proof? No. But it was enough to save the stand from falling on the occasional bump. (A leg closeup here).

This is where I have to say it again, Kindergarten teachers are gods. While I was shooting a kid at a time, and dealing with one more at the queue. The teacher: made a queue, arranged the other kids in a sing and dance circle, orchestrated the preparation of the candy tables, separated those two boys that always fight in the corner where no one sees, and did plenty of others things that I probably missed cuz I was busy taking a shot of one kid at a time. GODs I tell you.

The thing about Gaffers Tape is that it comes in huge black rolls that makes you look really uncool when you carry them for no apparent reason. Zeke from Nice Photo Mag has a nice little hack that solves this problem. See video below: