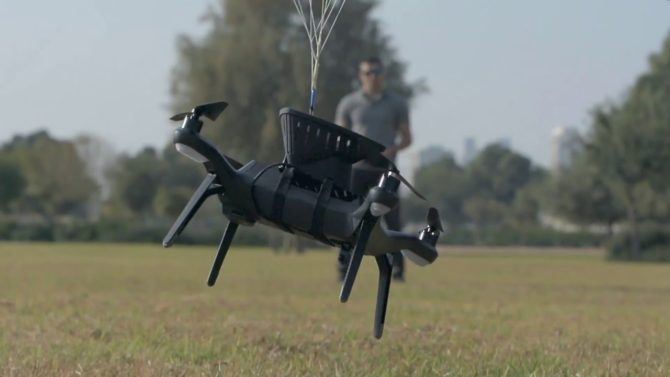 While drones are no doubt getting smarter and smarter with each new generation, the unexpected can happen.  Motors can burn out, you can lose control, there’s accidental or intentional interference to worry about, but whatever the reason, stories of drones falling out of the sky and crashing to earth or spinning wildly out of control and hitting the sides of buildings are becoming more common.

A company called ParaZero have come up with a solution that seems like such an obvious idea, I’m surprised it’s taken this long for it to happen.  Parachutes!

Founded in 2012, before drones started to hit the mainstream and terms like multirotor, quadcopter and hexacopter were replaced by the ominous catch-all “drone” title,  ParaZero specialises in the development of ballistic parachute systems for both manned and unmanned aerial vehicles.

While a parachute isn’t likely to save your drone from every potential hazard that could bring it down, it can go a very long way towards improving drone safety and the perception of them in potentially troublesome areas.

This isn’t to suggest that adding a chute to your drone will allow you to flout the law and fly in areas you know you’re not supposed to due to the potential risk of injury, but many drones are flown around the world completely legally over groups of people and this can help minimise the risk that they may pose to the people below in the event of an incident.

The ParaZero parachutes are contained within a capsule that straps to the top of your drone and deploys in less than a second starting from the instant it detects that it’s free-falling.  It does this without any input from the operator, who often doesn’t realise there’s a problem until it’s far too late for them to do anything about it anyway.

The extra weight of a parachute will affect your flight time and the payload that your drone will be able to carry, but ParaZone’s systems are made from composite lightweight materials designed specifically to minimise the impact they may have on your drone’s functionality.

With regulation becoming tighter and tighter, and drone insurance now being a thing, parachutes may one day become mandatory for some users or at least reduce the cost of your insurance payments.

Either way, it’s clear that drones are well and truly here to stay, and will be playing a major role in our future, whether used as aerial cameras, rapid delivery systems, or simply for personal enjoyment.

Ensuring that these devices are operated as safely as possible, and that they’re still safe in the event of a failure, whatever the reason, is vital.

The ParaZero team will be exhibiting its parachute technology at XPONENTIAL in New Orleans from the May 2-5, 2016.

So, drone owners, is this something that appeals to you?  Is it something the drone manufacturers should’ve designed and built in for the start?  For those not so keen on drones, does this go a step towards making you feel a little more comfortable around them?  Let us know in the comments.