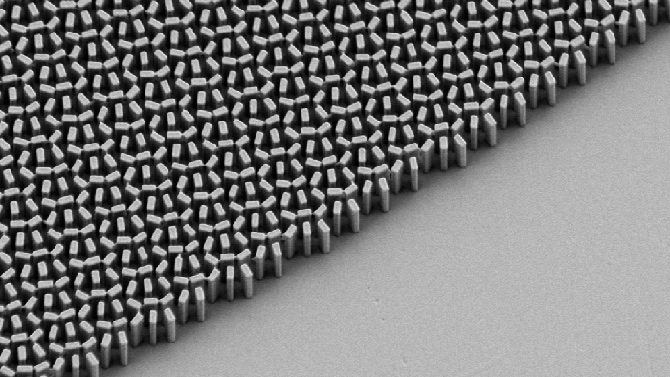 A team at Harvard University have build a lens that’s thinner than the waves of light it focuses.  Based on light-warping metamaterials, this lens may one day replace the heavier glass lenses found in items like microscopes, smartphones, cameras and even telescopes.

Lens technology has come a very long way since those early days, but it’s still difficult to build very compact lenses.  If you’ve ever wondered why your phone’s camera lens sticks slightly proud of the back, this is why.

Lenses, by their very nature, require several pieces of curved material (some type of glass), in order to bend and focus the light of the scene before you onto your sensor (or film plane).  But what if these stacks of glass could be replaced by a single flat lens, thinner than the light waves themselves?

Well, that’s exactly what researchers at the Harvard School of Engineering and Applied Sciences plan to find out.

The team have now demonstrated the first planar lens that works with high efficiency within the visible spectrum of light (everything from red, to blue).

Using an ultrathin array of ting waveguides, known as a metasurface, the lens bends light as it passes through, resolving nanoscale features separated by distances smaller than the wavelength of light itself.

Titanium dioxide, a very common material used in everything from paint to sunscreen, was used to create the ultra tiny array of nanostructures that form the lens element.

We wanted to design a single planar lens with a high numerical aperture, meaning it can focus light into a spot smaller than the wavelength.

The more tightly you can focus light, the smaller your focal spot can be, which potentially enhances the resolution of the image.

The team claim that reducing the number of steps required to make the lens make it less prone to manufacturing errors that we often see in traditional glass optic based lenses.  Chromatic aberration would be all but eliminated and focus inconsistencies between multiple samples of the same lens would be a thing of the past.

At the kind of scales these tiny metasurface lenses work, they may even provide better focus than a state of the art commercial lens.  Potential consequences of this are even smaller action cameras with image quality that rivals cinema and 3D camera headsets that don’t feel like they could break your neck at any moment.

A paper, with the rather fetchy title “Metalenses at visible wavelengths: Diffraction-limited focusing and subwavelength resolution imaging”, is available to read in full at Science.  If you don’t have a subscription to Science, and don’t want to pay for $30 for a day’s access, you can read more about the technology on New Scientist.

Or, you can go straight to the source and find out more on the Harvard SEAS website.  If the title of their paper gave you a bit of a headache, they also provide a handy breakdown of exactly what it means.

The future potential for this type of lens technology is pretty huge.  As well as the obvious benefits to photography, it also helps makes Google’s recent contact lens patent appear a bit less science fiction.

What do you think?  Could this finally make [insert your cellphone of choice] the “DSLR Killer” it’s proclaimed to be every time a new version is released?  Or will this just become another very cool technology we might get to taste for a little while, before it moves on to higher paying industries?  Let us know in the comments.