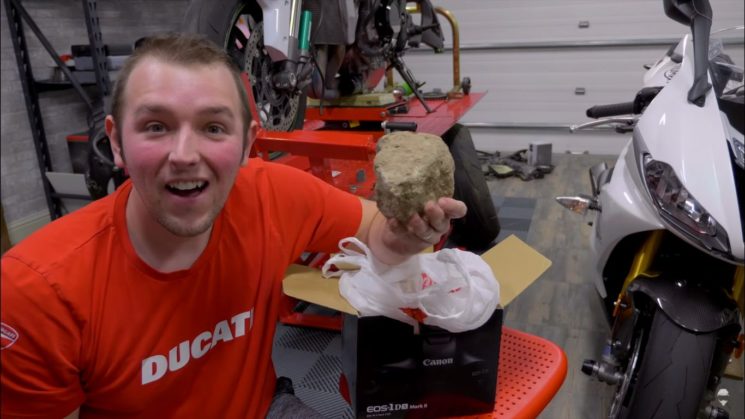 When ordering stuff online from huge retailers, mistakes can happen. But a $6,000 mistake is something that might get one really upset, especially if it happens twice. According to YouTuber chaseontwowheels, this is excatly what happened to him.

He allegedly ordered a $6,000 Canon 1DX Mark II from Amazon. In the video he shares, he unpacks the box, and instead of the camera – there is a collection of rocks. To make things worse, the package he received after complaining also didn’t contain the camera, but he says he got a box of bricks instead. What were the odds?

The vlogger explains that he received a box of rocks after first ordering the camera from Amazon. Allegedly, he didn’t order it from a third-party seller, but directly from Amazon, which makes the case even more unbelievable. Here is the first video, when the man received the box of rocks instead of the pricey Canon camera. Mind the strong language.

After the initial shock (and filming the video to share his experience), the vlogger says he contacted Amazon’s customer service. They apologized and sent him another package after two days. They also rewarded him with $20 and gave him a free month of Prime. Although, he says he already was an Amazon Prime member.

When the new package arrived, chaseontwowheels recorded the unboxing video. This time, he hadn’t opened the package before he grabbed the camera. To his surprise, the same thing happened again! Okay, not exactly the same – the second time he received a box of bricks.

In the second video, the vlogger admits he overreacted in the first video and “gave Amazon a lot of sh*t.” But I guess he didn’t expect to receive bricks after the rocks. He didn’t rant in front of the camera this time, but he says he went straight to Amazon’s website and had another chat with the customer representative. This time, they reportedly told him it would take two to three weeks to investigate the case and send a replacement package.

The comments on the two videos are different. Some people believe it’s some sort of a scam from third-party sellers, and that’s what first occurred to me as well. However, the vlogger claims he ordered the camera straight from Amazon, so it’s not clear how something like this could have happened twice.

On the other hand, some users don’t believe that this story is legit. Still, in the second video, you can see that the vlogger unpacks the box with Amazon sealing. Also, he seems genuinely frustrated. Anyhow, I wonder what he will get in the replacement package. I can only hope that third time’s a charm, but there’s a chance he might end up with a concrete block or something like that.

UPDATE (1 March 2018): after the investigation, Amazon informed chaseontwowheels that the seller they were working with was selling “bad cameras.” There was no detail explanation because the investigation is still ongoing. Anyhow, he received a full refund and a $1,000 gift card from Amazon. As for the camera he tried to order on Amazon twice: the third time he ordered it from B&H. It arrived to his address, and there were no rocks or bricks inside the box. I guess third time is a charm. If you’d like to get updated further, make sure to watch the video below.