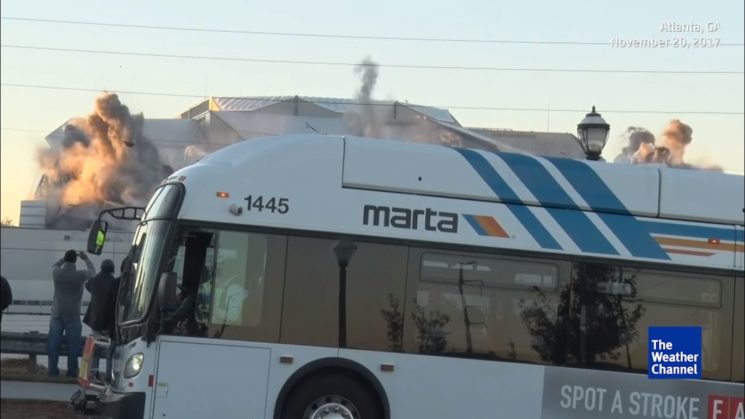 Photobombing can end up with some hilarious photos and videos. However, if it ruins your once-in-a-lifetime shot, I don’t think you’d feel like laughing. This is precisely what happened to a camera guy from The Weather Channel while he was shooting Georgia Dome’s implosion yesterday. And it’s sad and hilarious at the same time.

As the video description reads, the live streaming was going on for 40 minutes. The video shows the last few seconds, and everyone is counting down. 5, 4, 3, 2, 1 … and a bus stops right in front of the camera, blocking the entire view for the guy who thought he had the best seats in the house. When it moved a few seconds later, the show was already over.

I must say I cracked up when he disappointedly yelled “No bus! Get out of the way!” But although it’s kinda funny, I sympathize with the guy. I’m sure he had planned everything and spent a lot of time there filming – just so he can have it ruined in seconds. You have to admit; this can be a perfect metaphor for some situations in life.

And while this isn’t the first time a bus ruined a demolition video, this one had the perfect time to block everything, from the beginning to the end. It’s such a shame for the camera guy. But hey, I guess he might reach more views this way.