Back in 1999 the Wachowskis and Keanu Reeves introduced a something new with The Matrix – Bullet time effect. The idea was to show the time flow from a bullet perspective. Since time is relative, bullets moving in mundane speeds meant everything else really slows down. This trick allowed Reeves to dodge bullets, and to ponder about the existence of spoons. 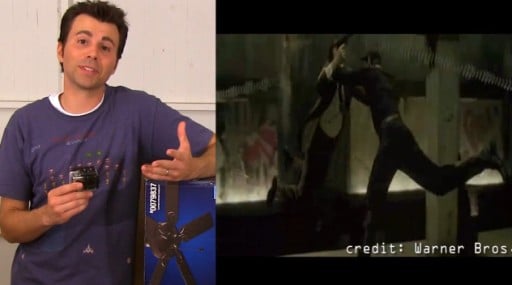 In the matrix the effect is achieved with tens of cameras shooting in succession or simultaneously, and in the final edit a sequence is made by grabbing a frame from each camera. Even today making a full 360 bullet time can be really expensive.

but for smaller objects Mark Rober found a way to spin a camera really fast to get a similar effect. Mark hooked a rig to a ceiling fan using its high speed rotation for swift camera placement. A set of lights was placed on the rig so they are stationary in relation to the camera. the last ingredient was a  GoPro Black set to shoot 240fps slow-mo. Mark was able to capture some amazing bullet time footage.

Here is Mark’s description of the project:

“I shot all off this footage with a GoPro HD Hero 3 at 240 fps. NO TWIXTOR!!!… but I did you use After Effects smooth motion thing in parts which is pretty much the same thing… it just seems like writing NO TWIXTOR is like a badge of honor for slow mo videos for some reason… so I wanted to put it in there.

And one of the resulting bullet time sequences:

Here is a closer look at the rig. Since the background and light is stationary relative to the camera – the light and position stays constant while the middle object rotates. 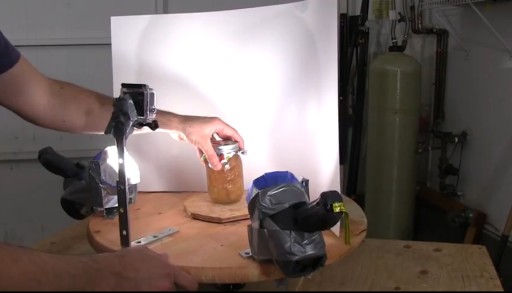 P.S. While other methods may not be as cheap as 30$ it is still possible to produce a budget tight bullet time scene provided you have enough photographer friends.

DIY: How to make your own ‘Centriphone’ bullet-time rig