Most photographers have seen some of Dr. Harold Edgerton’s work like a bullet shooting through an apple or a bullet splitting a playing card. Back in the 1960’s when Edgerton was taking these types of photos it was quite revolutionary. To take these kinds of photographs Dr. Edgerton had to first invent the modern camera flash. Today duplicating these photos is feasible for just about any amateur photographer who is willing to spend a little time understanding some common high speed photography techniques and some money to buy some specialized equipment. However, the really exciting idea isn’t reproducing his iconic photographs, but having people take creative new high speed photos. 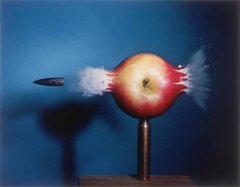 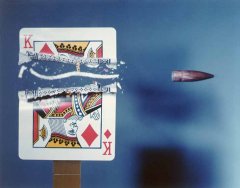 This article is going to show you how to use the Camera Axe and it’s projectile sensor to take some of your own amazing high speed photographs of objects being hit by bullets. At first it may seem that there are only a few objects to shoot, but once you start getting into this field of photography it seems like every trip to the grocery store, farmers market, dollar store, or yard sale becomes an expedition to find new targets. 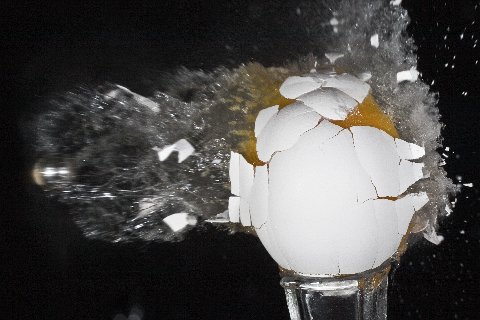 For me most critical thing with safety is make sure that loading the gun is the absolutely last thing I do before taking this shot. When it is loaded I make sure it never points towards anyone. I always wear proper eye protection. I put several large sandbags behind the target as a backstop that can safely stop the bullet so it doesn’t ricochet. Going to a gun range is probably the best way to do it and is required for anything more powerful than a pellet gun.

It is your responsibility to follow laws and to operate a gun in a safe manner. You have been warned, so don’t blame me if you hurt yourself or others. 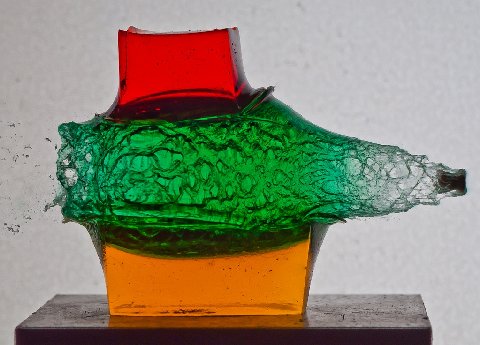 This is an example of how I setup a photo shoot. You can see a green thing is attached to the end of the pellet gun barrel. This is the projectile sensor that measures the speed of the bullet. This sensor has two cords and they both plug into the Camera Axe. Also plugged into the Camera Axe is a Canon 580 EX flash. There is a Canon 30d with a 100mm macro lens to take the photograph and a remote trigger for this camera to make things a little easier. Last but not least is the sacrificial red Christmas bulb (ie target) that’s about to get blown to smithereens. Just outside the scene I have a sandbag to stop the bullet.

Once I have everything in place (don’t load the gun yet), I make sure the flash is set to manual exposure and set the power to 1/128th. If needed you can increase the flash power setting, but the higher the setting the longer the flash duration. That can lead to extra blurring in very high speed photography like this. I generally try to use 1/128th power and sometimes go to 1/64th if that just isn’t enough light. A better way to get more light is to use multiple flashes. Most of the time I use two or more flashes.

To get enough depth of field I usually start with an aperture of F16 and go up or down depending on how much depth of field I want in the photograph. Now is also a good time to set the camera to manual focus and then manually focus the lens so that your target is in focus.

I usually use a shutter speed of 2-5 seconds and rely on the flash to stop the motion. This means you need to take the photograph in a dark room. The next step is to turn off the lights, trigger the camera, and then manually trigger the flash using it’s pilot/test button. Take a look at the histogram on your camera and adjust your ISO to get the correct exposure. You can also reposition the flashes closer if you need more light or farther away for less light. At this point you might also find you need to compromise with your aperture and flash power to get enough light.

Once you are happy with the exposure and lighting it is time to setup the triggering system. In the next section I’ll explain how to do this with the Camera Axe, but as I mentioned in the beginning there are other high speed trigger options. 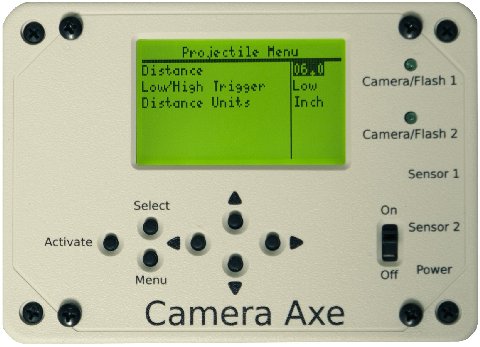 Press the [Menu] key until you get to the “Projectile Menu”. Then you can use the arrow keys adjust the Distance, Low/High Trigger, and Distance Units settings. The Distance setting is the distance from the edge of the projectile sensor to where you want the bullet to be when you take the photograph. Usually this will be a few inches after the object you are shooting. If you want longer delay, increase this by a few more inches. Some triggers have delays in milliseconds, but I like this distance measurement better because it lets you precisely place the bullet in your photograph. The Low/High Trigger setting will always be set to low if you’re using standard projectile sensor. The only reason to change this to high is if you make your own projectile sensor and want to trigger on a high voltage signal. The Distance Units setting lets you switch between inches and centimeters.

One other nice feature of the Camera Axe is after you take your picture it will display the speed of your projectile. If the velocity is less than 48 inches/second it displays this projectile velocity in inches/second. If it is 48 inches per second or greater the velocity is displayed in feet per second. Similar behavior happens with centimeters and meters if you’re using SI units. While this information isn’t really necessary, it’s fun to see how fast your bullets were traveling and a bit surprising how much they can vary from one shot to the next. 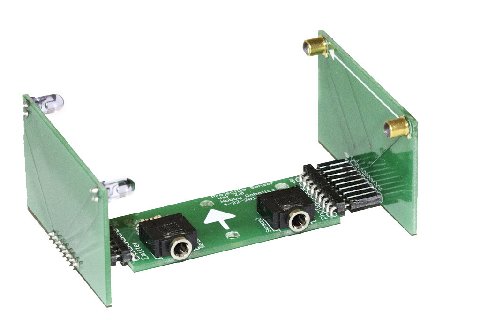 How does this magic work, you ask? The sensor board has two IR LEDs and two very high speed IR detectors. When the bullet passes through it blocks the IR light going to the detectors. The Camera Axe knows that these two sets of sensors are exactly two inches apart. Since projectiles have a constant velocity it is just a little 6th grade math to calculate the speed of the projectile based on the time it took the projectile to travel these two inches. A little more 6th grade math and we know the time we want to delay the flash to let the projectile get to the distance programmed into the Camera Axe. The Camera Axe has graduated grade school math, so it does these calculations for you. 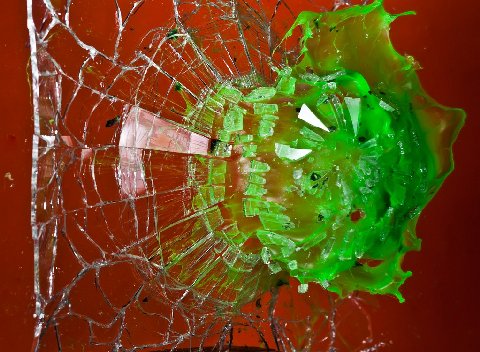 Camera Axe measures a time of 0.0002 seconds between the trigger times for each of the two sensors.

The user entered a distance of 6 inches.

So the Camera Axe will delay triggering the flash for 0.0006 seconds. Presto, perfect shot!

The only problem I’ve had with the setup above is that sometimes a standard flash just isn’t fast enough. This isn’t a huge problem, and I can get many awesome photos with a standard flash, but when I want to stop a speeding bullet in my photograph, I need something faster.

A standard flash like the Canon 580 EX has a xenon gas filled flash tube. These tubes produce a lot of light with a relatively low voltage (100s of volts). The problem for this type of photography is that xenon gas glows and that makes the minimum flash duration around 1/50,000th of a second. There is a solution to this problem and it is called the air gap flash. Instead of xenon gas it uses air. Instead of 100s of volts it uses a lethal 30K volts. I’m planning to write an article about how I built one of these flashes, but for those who can’t wait, there is an issue of the old Scientific America [pdf] that has a relevant project on the May, 1971 issue. My design is basically what you see in that article with a few more modern components. 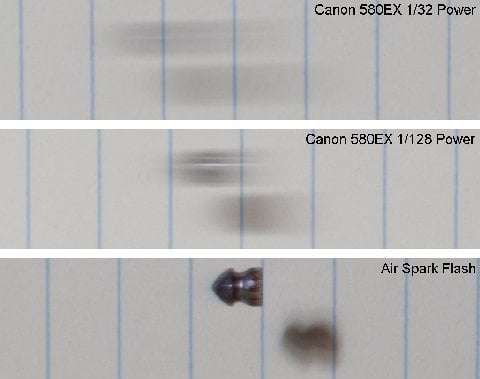 Thanks to “Visionary Engineer”  for providing the images from Dr. Harold Edgerton.

Thanks to Alan Sailer for providing some of the photos in this article. You can view his flickr stream here.

This guest post was written by Maurice Ribble, a high speed photographer and inventor based in Shrewsbury Massachusetts.

eBook: Your Complete Guide To Building A Photography Studio At Home

23 Pinhole Cameras That You Can Build At Home