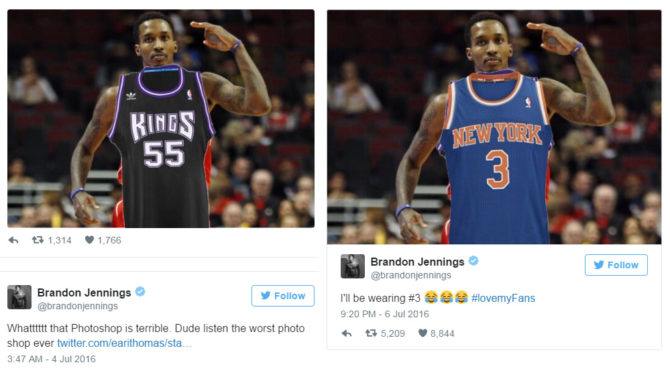 Celebrities, especially sports celebrities, seem to be fairly common targets for badly done Photoshop, but rarely has one responded quite like Brandon Jennings.

While the former Milwaukee & Detroit point guard was a free agent, fan “Alex L” suggested he sign with the Sacramento Kings using one of the worst Photoshop jobs in sports history to illustrate his point.

Needless to say, Jennings was not very impressed by the artist’s abilities.

Jennings did see the funny side, though, and this is how he announced his signing to the New York Knicks, imitating the fan’s “artistic style”.

After finding a little Internet fame, and giving us a good laugh, we think Alex deseves the jersey he’s asking for.  No response from Jennings, yet, though.

Good luck, Alex, and thanks for the laugh.

What funny responses have you seen by the victims of Photoshop fails? Let us know in the comments.