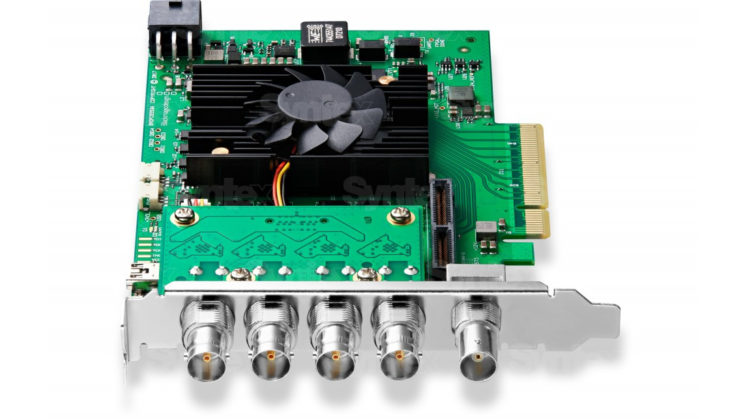 It feels like only yesterday that the world was being convinced that 4K is the future. Now, at a rapid pace, we’re already being pushed toward 8K. I’m not complaining. The higher resolution the cameras & capture devices get, the more options we get in post – even if the final content is being created for 1080p or 4K display.

Sharp recently announced its new 8K broadcast camera a few days ago, and now Blackmagic have come along with their new DeckLink 8K Pro. A capture card that’ll work with SD, HD, UHD, 4K and 8K 12Bit RGB 4:4:4 signals. It can also handle 64 audio channels and stereoscopic 3D. And it does it in real time.

Announced at InterBEE in Tokyo, you can’t just slap this card into any old computer. You need a fairly hefty PC to be able to handle it. Yes, that’s right a PC. Macs just don’t have the power, apparently, according to the video above. Although, I would imagine that if you’re on a 1080p or 4K timeline, the system hardware requirements won’t be quite so high.

The card supports both capture and playback or 8 or 10Bit YUV 4:2:2 as well as 10 or 12Bit RGB 44:4. It can be captured uncompressed or to standard editing codecs such as ProRes or Avid DNx. It also supports frame rates of up to 60fps at 8K and stereoscopic 3D for all modes up to 4K DCI at 60 frames per second at 12Bit. Essentially, this card is pretty much everything you could ever need for capturing footage straight from camera to computer.

Not surprisingly, the card is built to work seamlessly with the upcoming 14.2 version of DaVinci Resolve, also made by Blackmagic. But it will also work with Premiere Pro, After Effects, Final Cut Pro X, Media Composer, Nuke and more. A free SDK will also be available allowing customers to build their own specialist capture solutions (which isn’t uncommon in higher end organisations).

The DeckLink 8K Pro itself is available to pre-order now for $645 and will ship in January. Along with this announcement, the DeckLink 4K Extreme 12G is also seeing a price drop. That card is available now for the reduced price of $895 (down from around $1,400).