To understand my view on the Sachtler Flowtech 75 (B&H | Amazon) I need to share a story. I remember one time I walked into my rental house, and I came to pick up my Sony FS7. It was outfitted with all the bells and whistles that one would need for a production. I called the rental house owner and asked him the last minute if it’s ok to add a tripod. He told me, “sure, no problem! Take the Sachtler 20”. I asked the worker to get me one and asked him how much extra it was going to be and he said: “Nothing”. Later we chatted and I asked him how could it be that you give a $6,000 camera with a tripod that costs more than $11,000? That’s double what the camera costs! His answer stuck with me for years to come.

“A good tripod keeps everything on top of it safe, it’s cheaper for me to rent the tripod for free and have no broken cameras returned than to save some pennies on the tripod and fix a camera every few rentals.” 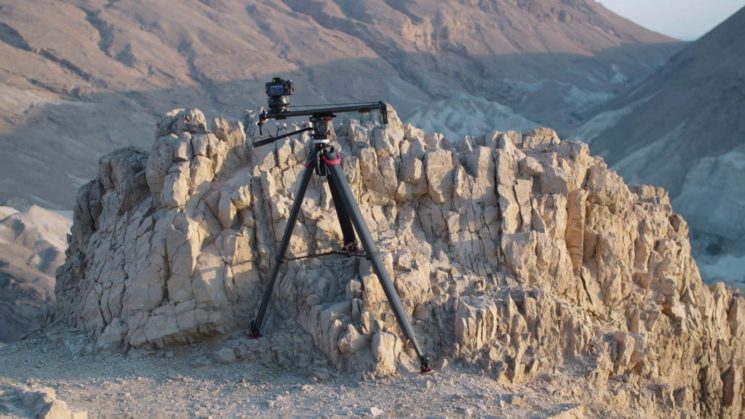 Sachtler has always been well renowned for being an industry-standard in high-end video productions. It has definitely been able to fill the void between your average John Doe tripod, and the Oconnor 1030 we all dream of.

We received the Sachtler Flowtech 75 for review from our friends at Sachtler, who asked us to put the Flowtech through the most intense of stress tests. In fact, their confidence with the durability of the product is so high that when we suggested dipping the tripod in the Dead Sea (One of the saltiest places on earth), they weren’t even phased.

Before we get into the Dead Sea (pun totally intended), let’s talk about the tripod. The Sachtler Flowtech is a sophisticated, heavy-duty, and rigid tripod, built for a professional. So, what is there to say about yet another tripod? Well, the Flowtech has revolutionized the way we interact with our tripods.

The revolution starts with the genius mechanism which they developed to extend the legs. Your general encounter with tripods is probably either a latch-locking mechanism or those god awful twist-mechanisms. The Flowtech takes a new approach by delivering the entire length of the legs in one lever. And that lever is placed at the top of the tripod. To add simplicity to the system, the lever is a large and comfortable latch that you pull up and it drops the sections using gravity. When I’m alone, I do the reverse to pack it up, I flip the tripod over and unlock everything to let the legs retract using gravity. The ease of use of one latch just under the head of the tripod means no more bending down or guessing, checking and re-guessing if the legs are at the right height… 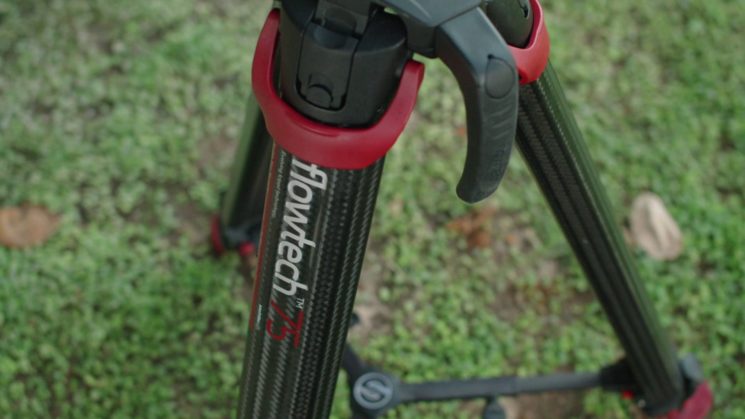 The legs are also equipped with feet that can be converted from angle-flexible rubber feet to spikes. The tripod reaches an impressive 24”-61” inches of height. If 24” sounds too high to you, don’t worry. If you remove the mid-level spreader, you can almost completely flatten the legs. You can go as low as the depth of the screw of the bowl head attached. (To make things even easier the spreader is attached and detached with a quick latch system)

The head we got is the Ace XL head which holds up to 8kg. The legs actually support 20kg, and fit a standard 75mm bowl head. So if you’re coming from another system and you already own a head, you can pop that right in there. However, Sachtler heads are a different level of smoothness. Once you play with the different tension levels of the fluid drag system, it kind of gets you hooked. Good luck going back. The head also comes with an illuminated level to help get that perfect balance. 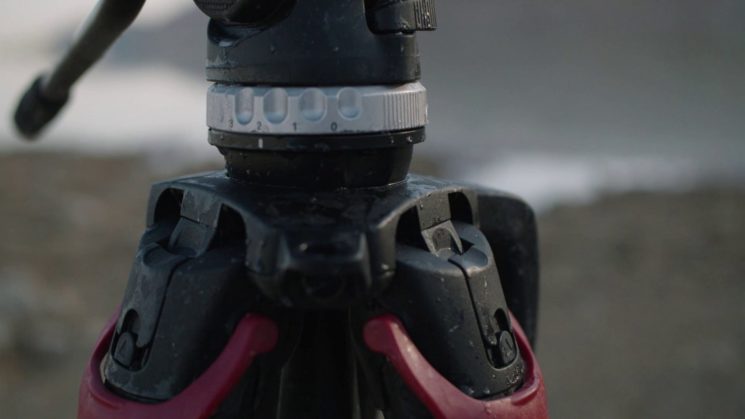 Lastly, and for some unknown reason, my favorite thing about the tripod; The handle. Sachtler includes a carrying handle as part of the package. And that handle screws on the side of the base. The handle is incredibly thick and every time I pick the tripod up I feel confident in the handle. It’s not to say that there aren’t other tripods that have handle, but you have to keep in mind that putting a handle (in any position) adds a lot of stress in one point. The chances of failure with crappy handles are high, and on cheaper models, it’s not a risk you’re willing to take. I’ve had multiple medium size rigs and carried the tripod and the rig just from the handle. You also get to enjoy a Manfrotto anti swivel connection to add even more accessories to alleviate weight from the head. The fun doesn’t end there either. Closing the legs you’ll see that they snap together, pretty firmly, with the aid of magnets. There’s no fear of legs flying out.

Taking the Flowtech to the Dead Sea

So, why are we so keen on dipping the Flowtech in the Dead Sea? For two reasons:
1: the tripod is made entirely out of carbon fiber (with the exception of a couple of screws). Surprisingly, even the head should be sealed . ( no matter how much Sachtler tells us dipping the head is completely safe is, I can’t shake the feeling that this is STILL a bad idea)
2: Saltwater is a GEAR KILLER – accidentally dipping your equipment in a regular ocean just for a second, can cause permanent damage. Now, the salinity in the Dead Sea is about 30 percent salt. (More than 10x what’s in the ocean) When you leave gear for over an hour… you’re just asking for problems.

And so we did… 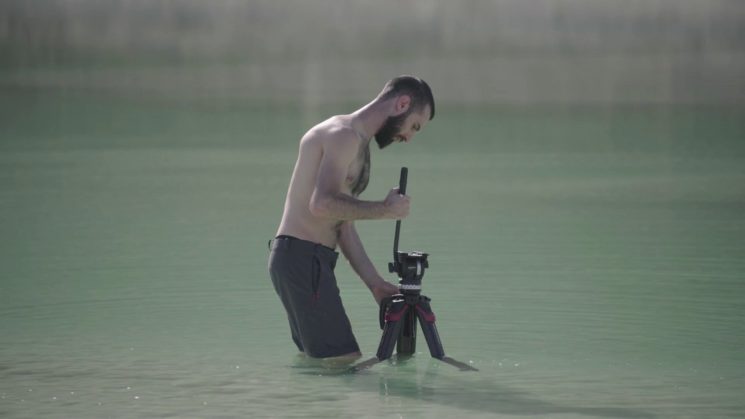 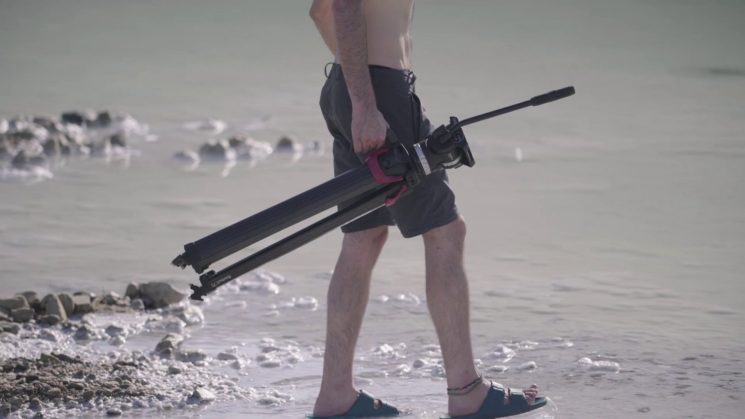 A little less than an hour and a half later, we plucked the tripod out of the oily, corrosive, gear-killing water and we were amazed. To start with, the amount of water that poured out of the tripod was staggering. The legs are hollow, but managed to have water sit inside the space for the legs for a good while draining it took minutes. Upon closer inspection, we found out we had missed a couple of places where there are screws we didn’t consider. The most concerning was probably the screwable handle for the bowl head. It has its own metal thread, and when we disassembled it a good amount of water was hiding in there as well. Take a closer look at the tripod and you see all the oils and salt crystals that form on the tripod. Large chunks had developed and really started to make me worry whether or not the tripod had a shot at surviving this.

So how did the tripod hold up?

Well, only time will tell, but upon first glance, the legs seem to be totally unaffected, still being able to lift and retract the legs in one smooth motion. The mechanism itself does not feel harder to lift. The most surprising thing is definitely the head. I am SHOCKED to find out that the Fluid Drag System suffered absolutely no damage, not even the different lock positions. If you were to show me this specific tripod that went under the dead sea for so long, I would suspect it to have gone under such abuse. 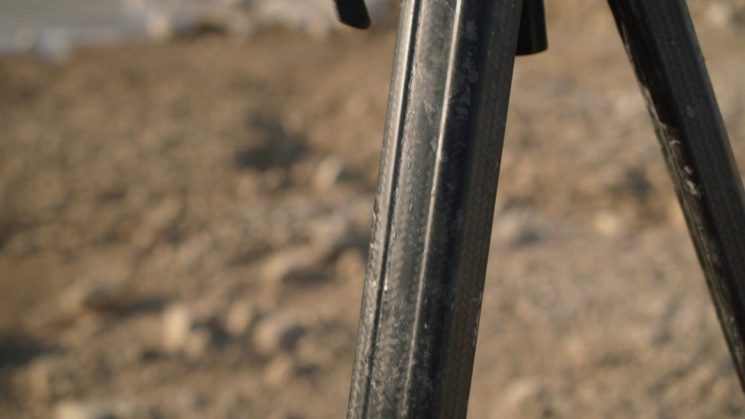 In conclusion, the tripod faired extremely well (so far) against my little torture test. But Alas, not all that’s gold, glitters. It’s still a Sachtler and it costs at a pretty penny. Coming in at almost $1,700, it’s not exactly affordable to everyone. There is a huge variety of tripods available for far less money than that. However, remember what my rental house owner told me, this is an investment for my equipment. You’re not buying this tripod to save money on the tripod, you’re buying the tripod to save money on your gear. My recommendation? Knowing it exists is half the battle, asking your rental house for the tripod, or asking them to bring it in and rent it out could save you a lot of money and hassle on broken gear. When you can afford it, I trust that the investment will pay for itself in the long run.

We will be taking another inspection on the tripod next month observing if any long term damage has come, so make sure you stay tuned for that.

Authors note: Please don’t dip your equipment in saltwater, it’s a stupid idea, and most things will suffer from it tremendously. If you are unfortunate enough to have it happen to you, make sure you run to a clean (saltless) water source and rinse down your gear as much as possible; For electronics use rubbing alcohol or wet wipes.