For those who use flash on location, the biggest issue you’ll usually face is power. More specifically, a lack of power. Speedlights start to drop rapidly once you go into high speed sync and big inverters are a pain to carry.

Great advances have been made in the last few years by the likes of Profoto and Godox, but those units still lose power when you go above your sync speed. Priolite’s “Hot-Sync” technology claims to solve this problem. They also have a new 500Ws monolight to show it off.

Priolite’s started making strobes in 2010, but are still a relatively unknown brand compared to the big names. The Hot-Sync technology introduced in 2012 overcomes the limitations of HSS by providing continuous two way communication with the camera.

Hot-Sync works by intentionally extending the flash’s duration to cover the entire exposure.

Let’s assume you are using a camera with a focal plane shutter. When using shutter speeds above the sync speed, (usually faster than 1/200s or 1/250s), a slit between the first and second shutter curtain is traveling across the camera’s sensor. The width of this slit is determined by the shutter setting. The faster the shutter speed, the smaller the slit. The shutter’s curtains (and the slit) move across the sensor with constant speed, independently of the shutter speed setting.

Priolite HotSync strobes start to burn at the moment the first curtain begins to expose the sensor, and burn as long as the shutter slit travels across the sensor. This time is approximately 1/200 sec = 5 miliseconds.Therefore the complete amount of light of the Priolite HotSync flashes is available for the sensor.

This ensures full power for the full duration of the shot, but I do wonder how well it can stand up to continuous firing without overheating or blowing the bulb.

Initially released for Canon, Nikon was soon added to the list. The units now also work with most Sony and Pentax (including 645D/Z) bodies, too. In fact, they appear to be the only flash that will sync all the way up to 1/4000th of a second with the 645D/Z cameras.

The one thing that immediately strikes you about this system is the monstrously huge transmitter that goes on your hotshoe. It’s big, it’s bulky, but it has all the controls on it that you’d expect to see on the back of a strobe. They’re all right there at your fingertips. 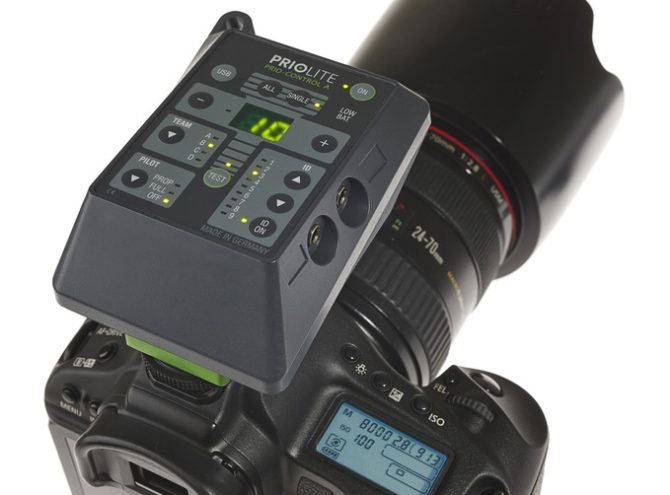 If you’re placing lights up on high stands or difficult to reach locations, this is an invaluable amount of control. Bringing lights down to change power only to then have to put them back up again is not fun.

The previous generation of Priolite strobes are rather large. The new MDX500HS Ultra is almost half the size of its predecessor, which will definitely help when it’s up high. It should also make them a little easier on your back when carrying them to a location. 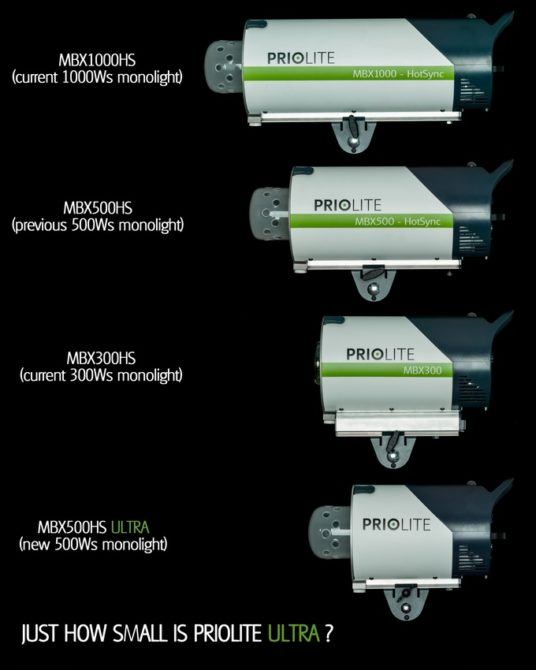 One quite interesting feature of these lights is something they call the “Quickmask” mode. Assuming you’re shooting on a white seamless, this basically allows you to create a layer mask in-camera. Running their Photoshop action then allows to quickly mask out the object from its environment.

It seems to me, though, that you could do this with pretty much any light, it might just take a little more effort when you shoot. Priolite’s system speeds up the shooting part by automating the lighting for multiple shots.

The Priolite Ultra is fully developed and tested, and supports Priolite, Hensel and Bowens S-Fit modifiers without adapters. They’re certainly not cheap, but they’re not unreasonably expensive, either.

You can find out more about Priolite on their website, or check out the MBX500HS Ultra kickstarter if you want to get your hands on some.