According to a press release from The Bahrain Center For Human Rights, renowned street and war photographer, Ammar Abdulrasool has just been arrested. Again. Ammar was taken in what appears to be a succession of illegal raids targeting photographers and journalists that took place in Bahrain during the past weeks. 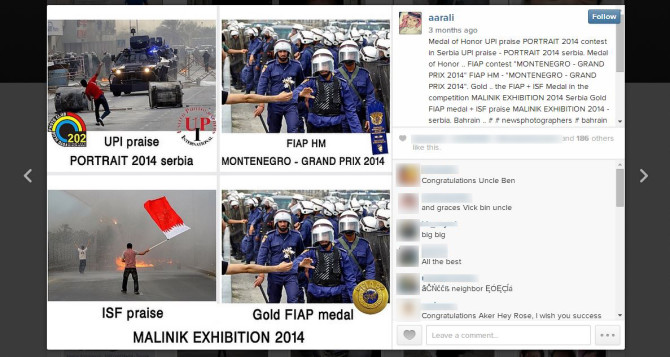 Ammar-Abdul shares some of his recent award winning images on his Instagram profile.

Abdulrasool’s family says a group of masked civilians and military officials showed up and forcefully entered the photographers father’s house at daybreak on July 24th. Upon discovering the photographer was not there, the group had the father lead him to the photographer’s apartment which they promptly raided, taking two of Abdulrasool’s cameras, confiscated a cellphone, and took the photographer into custody. A warrant or legal documentation authorizing the raid were not issued.

The photojournalist faced similar treatment last year when he was detained at the central police station, but was released after one day. Ammar Abdulrasool is well known for his award winning work covering various outbreaks throughout the Middle East. He has received over 80 international awards  for his photojournalism.

In another release from BCHR made yesterday, it was reported that another photojournalist, award winning 21-year old Hussain Jaffer Hubail, who was arrested in July, 2013 and charged with “inciting hatred against the regime through social media, and calling for illegal protests”, has been repeatedly denied medical attention for a life-threatening heart condition.

The BCHR cautions photographers in the area of the potential for being victimized, citing:

“In view of the Bahraini authorities’ vicious crackdown on freedom of expression and their targeting of media activity, the BCHR fears that detained Ammar Abdul-Rasool will suffer torture and/or imprisonment. The BCHR has previously documented six detained photographers – two suffered extra-judicial execution, and eight were fired at directly by security forces using shotguns.

The BCHR believes that the targeting and arrest of photographers represents a flagrant violation of the covenants and international treaties that guarantee the right to freedom of expression, in particular Article 19 of the Universal Declaration of Human Rights, which states that “everyone has the right to freedom of opinion and expression; this right includes freedom to hold opinions without interference and to seek, receive and impart information and ideas through any media regardless of frontiers.”

[via Bahrain Center For Human Rights]

« Florida – The Worst Place In The World To Take Good Photos?
Looking Back at the Photo I Regret Taking »