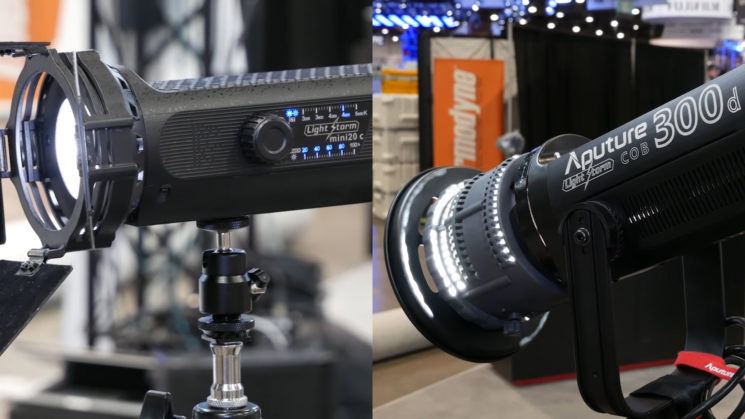 Another show, another round of new gear announcements. This time it’s NAB and Aputure’s turn to show off some new lights and modifiers. There’s the Lightstorm Mini 20C/D which has been shown of in a few videos recently. The Tri-8 is finally coming, and there’s a variable temperature version as well as the daylight one we showed you from Photokina. And there’s a new big 300 Watt S-Fit LED.

As well as lights, there’s modifiers. The first is a new softbox. Smaller than the Aputure Light Dome, the new Mini-Dome is cheaper and more durable. There’s also a new Space Light modifier, designed to replace things like China lanterns to provide a nice soft ambient glow. Tom Antos got a chance to have a look at them all, and had Ted Sim explain the new kit.

First up, the new big boy. 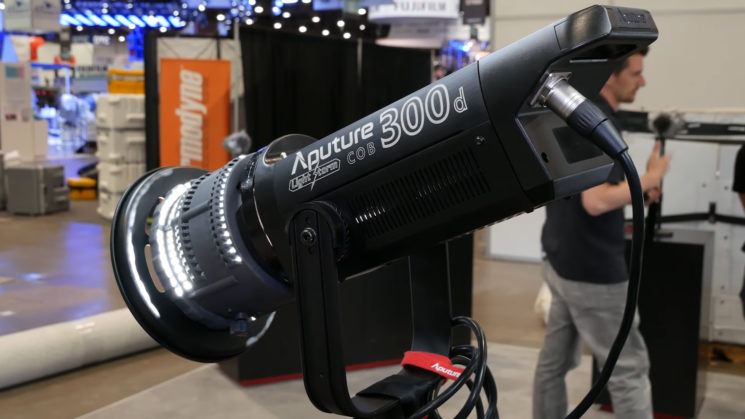 LED lights shaped like studio strobes is becoming more and more common. As is the number of them that use standard Bowens S-Fit modifiers. The Aputure COB 300D is a daylight balanced 300Watt LED light, offering similar light output to a 2K tungsten.

It’s a single cell LED putting out around 82,000 Lux, with a TLCI of 98, thanks to a glass filter over the front of the LED. It has a remote control unit which can also control the Lightstorm and Amaran lights and takes a pair of V mount batteries.

Shipping begins in around 3 months, and the price is expected to be under $1,000. This sounds pricey, but when you consider tungsten and HMI equivalents can get into the $5K+ price range, it’s not too bad. A tungsten version is also apparently on the way. 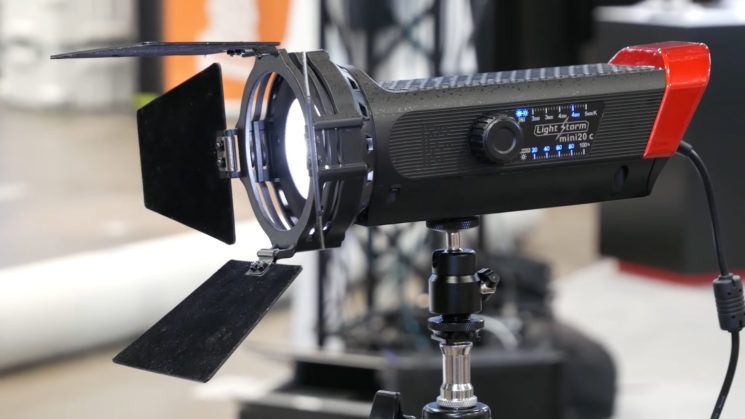 This is a light a lot of people have been wanting to get their hands on. A small but powerful little light with a built in Fresnel lens and barndoors. There’s two versions coming out. The “D” is the daylight balanced model, and the “C” is colour temperature adjustable between 3200K and 5600K. You can power them from a range of 5-18v, meaning you can use everything from USB battery packs to V-Mount batteries.

The Fresnel lens is adjustable to offer a beam angle between 20-80°. It has a TLCI of 97, and the C version offers an innovative LED design. This style of colour adjustable LED typically has two bright LEDs side-by-side of each of the extreme colour temperatures. The the two are mixed as you spin the dial to get the range in between. This can often result in double shadows.

To eliminate this, Aputure have taken a different approach. Essentially they have a circle within a circle. The outer circle is like a donut with a hole in the centre offering one colour temperature. Placed within the hole in the centre is the second LED at the other end of the temperature scale. A series of reflectors inside the head also help to further mix this light before it exits out the front. This means you only get a single shadow, that doesn’t change as you adjust the temperature.

While the light has featured in many of Aputure’s videos over the past few months, its release has been delayed. They just felt it wasn’t quite perfect, and wanted to tweak more and more things, add new features, and get it just right. It’s expected to be out in the next couple of weeks and cost around $200. 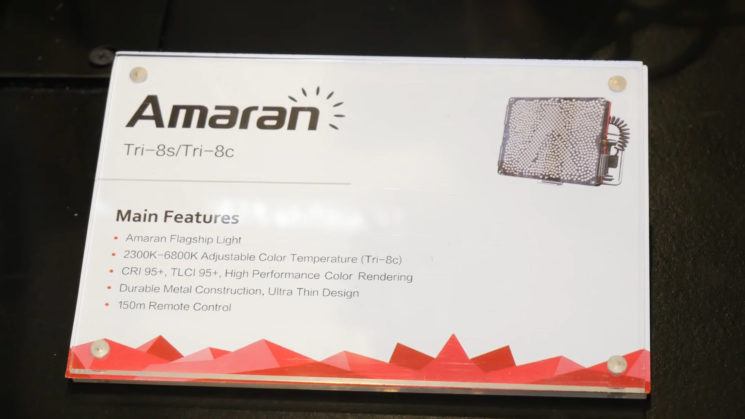 This is one we’ve been waiting for since Photokina. We got to check them out for ourselves while we were there, and I’ve actually put off buying LED lights myself until there was more information on the Tri-8. That information being prices and release dates. Now, they’re here. It’s a panel LED, like the Aputure Amaran HR672s, but substantially improved.

Like the one we saw in Daytona, it has durable metal construction, and a virtually indestructible front panel. It can be remote controlled up to 150m away, and offers all the group settings you’d expect. It has about the same light output as a tungsten light of between 500-650Watts and a TLCI of 95+.

This information update, though, comes with a new version. The one we saw at Photokina was daylight balanced. This one offers an adjustable colour temperature. And it’s a range that’s quite a bit wider than we’ve come to expect. Whereas most go between 3200-5600K, this one goes all the way from 2300-6800K, offering up more creative and corrective options. 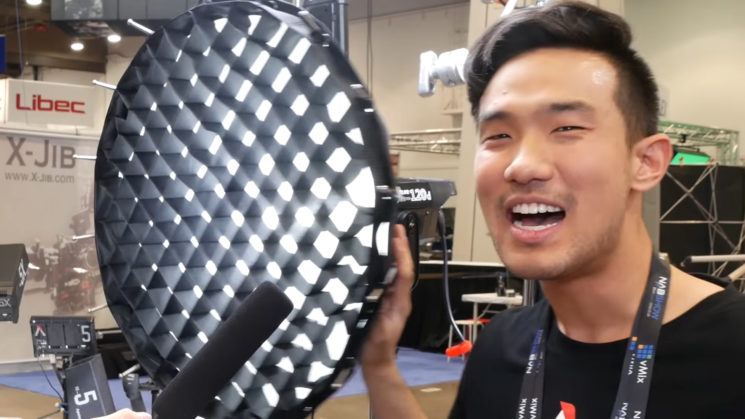 After receiving feedback from users about the 35″ Light Dome, Aputure took it to heart. The new Mini Dome softbox features some fairly significant changes. It’s a 22″ diameter parabolic softbox, that fits straight onto the COB 120D and 300D lights. So, it’s smaller than the previous dome, and that’s not all.

Users wanted a grid, so now the Mini Dome comes with a grid covering the front surface of the box to help prevent spill. Users also wanted more durability, so the new Mini Dome is constructed from super tough military grade parachute material. 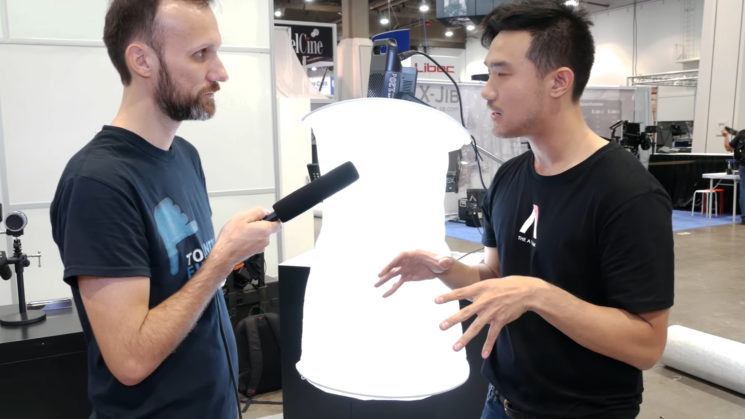 The Aputure Space Light is an unusual light modifier for many. It’s essentially like a giant version of the diffuser dome you might use on a speedlight. Designed to help provide fill light for large spaces, it mounts to the end of a vertically oriented light, and hangs downward.

You’ll want to use a light with a wide beam angle for something like this, though. Here, Ted has it attached to the Aputure COB 120D, with a 120° spread. But I would imagine it would work very well for photographers using a standard studio strobe, too.

It’s made from the same durable parachute material as the Mini Dome, which is manufactured specifically to prevent colour shift.

The Space Light is out in a month or so and will cost about $50.

So, some cool new toys, and I think one of those Mini 20s might end up on my shopping list.