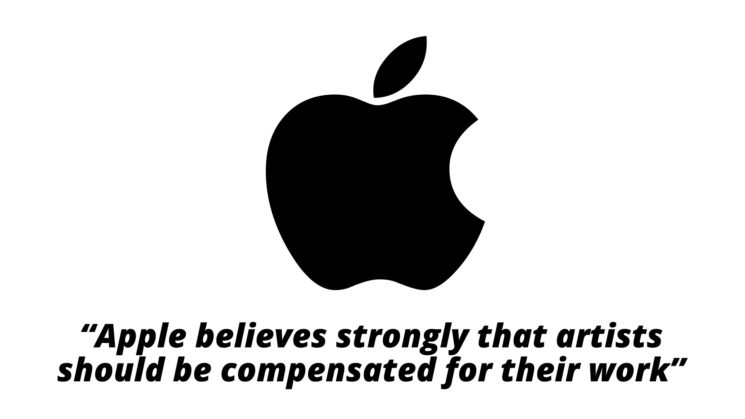 Contests requiring people to submit photos to enter are often seen as something of a rights-grab. You enter and give whoever’s running the competition a universal, worldwide, irrevocable license to do whatever they want with your photos. Most people don’t realise this, as it’s buried deep in the terms of entry, but more people are starting to realise.

Apple launched a new Shot on iPhone Challenge last week, and the “winners” would see their images featured on billboards, Apple retail stores, and online. A nice little ego-stroke, but no mention of compensation. No usage license fees to be paid. After being called out by quite a few people on Twitter, Apple have changed the rules to state that winners will receive a license fee. 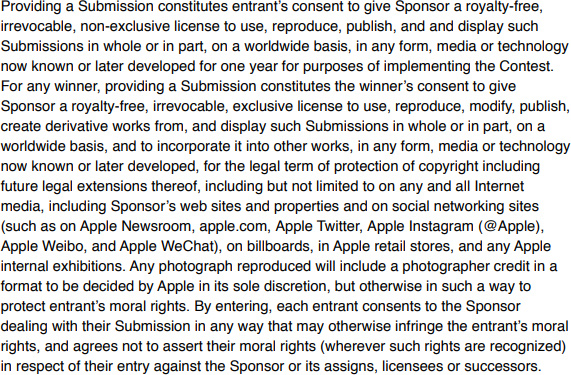 So, even just by entering, you were granting a royalty-free, irrevocable license to use, reproduce, publish, display, your images. Not just by winning, entering. And if you did win, that licence became exclusive to Apple, meaning you can’t sell it to other companies who may wish to use it. Without any compensation to you, the photographer.

As usually happens when a high profile company with very deep pockets comes along and tries something like this, Twitter took notice.

And Apple is one of the most valuable companies in the world.

Dear @tim_cook, if you want to use photos for an entire year in an ad campaign to sell more iPhones, you should be offering prize $ to the 10 winners, not photo credit in exchange for exclusive commercial ownership. https://t.co/KCd3QuSCFs

Even The Strobist himself, David Hobby took notice…

Apple was quick to respond, however, with updated rules. Former White House Photographer and one of the competition’s judges, Pete Souza, tweeted that the rules had been updated to provide compensation for winning photographers.

On the Apple website, the competition page now reads…

Apple believes strongly that artists should be compensated for their work. Photographers who shoot the final 10 winning photos will receive a licensing fee for use of such photos on billboards and other Apple marketing channels.

The clause quoted above now reads… 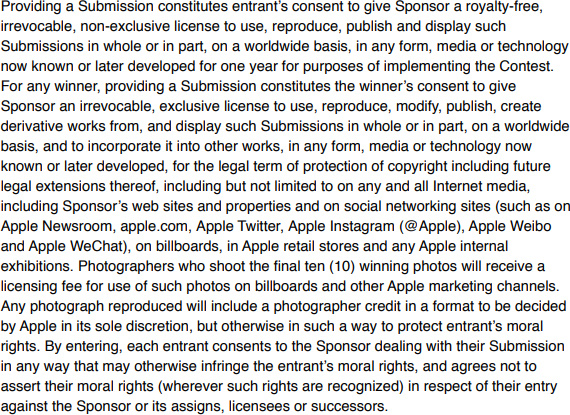 So, by submitting, you’re still providing them with a royalty-free, irrevocable license to use it. But if you’re one of their 10 winners, you’ll get paid for that usage. If you’re not one of the ten, but Apple still likes the photo and wants to use it at some point, then you may be out of luck when it comes to payment. Or, maybe not (you’ll see when you get further down this post).

Rule number 6, which specifically dealt with the topic of prizes for the 10 winners has also been updated.

The Twitterverse is claiming this as a victory for photographers and other creatives.

This is good news. Design/photo contests are spec work whichever way you spin it https://t.co/aXIfJrR4p4

Hard to believe that, thorough a series of tweets, you can change the mind of a trillion dollar company. What a world we live in. https://t.co/hnYVjHIbI3

Although some have said that Apple has paid for usage all along, even if it hasn’t been previously specified.

So, it may not really be any real victory at all, at least not in the financial context of this campaign. If Apple has been paying photographers for images used in their “Shot on iPhone” campaigns all along, then nothing really has changed for those whose work Apple uses.

But it is still something of a victory for creative industries as a whole. Because even if nothing has changed in terms of how Apple operates, such a high profile company controversy and the clarification of the rules sends a big message to other companies who plan to run competitions of their own, as well as the photographers who may enter them.

It tells the photographers that it’s normal for them to be paid for their images, even if it’s “just a hobby”. And it tells other companies that they can’t get away with using competitions as a rights-grab to get around paying licensing fees – especially when those licensing fees are often nothing compared to the advertising fees they’ll be paying to push the image out to promote their products.

Would you enter a competition that didn’t provide any kind of real prize except an ego-stroke?

« Canon sees a grim future for the camera business: expects digital camera market to shrink by half within two years
How to improve composition and take your food photography to a higher level »