They’ve received a new processor, of course, and some new computational photography features that’ll probably filter down to their other iPhones in some variety, too. But aside from a tiny bump to ISO performance on the wide angle camera, that seems to be about it, really.

When comparing the specs of the iPhone XS to last year’s iPhone X, things seem pretty much identical. 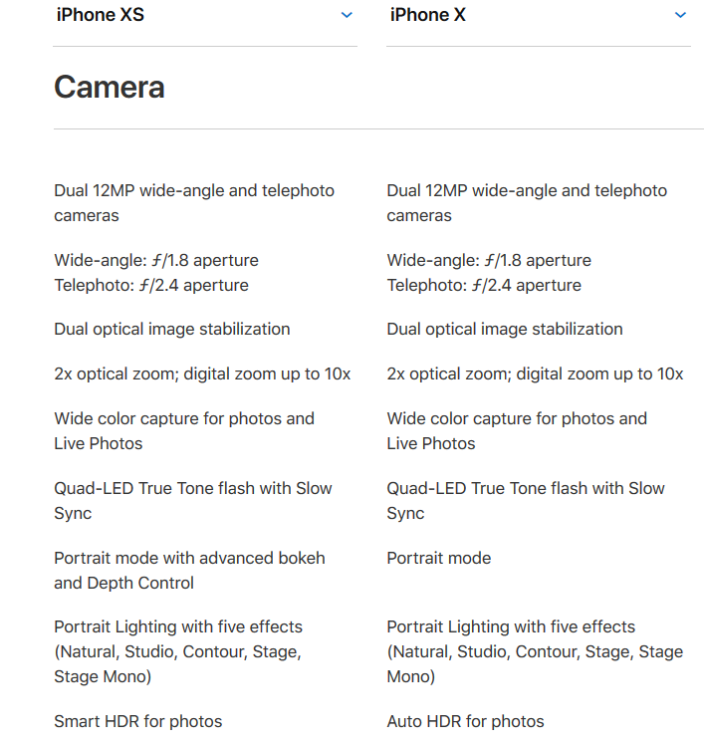 The only things that are really different are the “advanced bokeh and depth control” (we’ll get back to that) and “Smart HDR” instead of Auto HDR. Other than that, the resolution, apertures, stabilisation, optical zoom, flash, and most other features look pretty much the same. So, if you were hoping that the new iPhones would give your photography a boost, might feel a little disappointed.

There’s also a new front camera, with proximity sensor and ambient light sensor, as well as a separate infrared camera. This means that you can easily get your fake bokeh on in those selfies now, too.

There was a couple of odd statements during the keynote, though. First, Apple says that you can change the aperture after shooting an image. Ok, fine, this is their “advanced bokeh and depth control” thing.

They claim that this has “not been possible in photography with any type of camera”, completely ignoring the fact that Lytro offered it years ago. Ok, you’re right, that’s a completely different type of tech (he did say “any camera”). How about Huawei? They seem to manage it. Or, the Samsung Galaxy S9?

Does the feature suck? Probably not – at least, no more than it traditionally has, but it’s not a “not been possible with any type of camera” groundbreaking feature. And outside of tech reviews and people who don’t know how to turn it off, it probably won’t be used all that much.

The other questionable thing is Apple’s “brand new” Smart HDR feature. Essentially it keeps a frame buffer going, constantly shooting photos in the background. When you hit the button it takes a shot as normal, but it also has the option to use the previous frames that it captured to automatically generate an HDR. Sure, this might be new to Apple, but Google’s Pixel has used this tech for a while.

So, what’s the big difference between the XS, XS Max and XR? Well, the XS Max comes with a larger 6.5″ OLED display, for those who need their phones ridiculously big. The XR is the “budget” model, which loses the rear telephoto camera. All three phones use different screen tech, although all use Apple’s “True Tone” tech, and offer a wide P3 colour gamut.

The new iPhones also all offer dual sim support – which can be handy if you want to use the same phone for work and your personal life. They finally now have stereo audio recording, too. That only took a decade.

As far as what’s included in the box, all three come with a slow 5-watt charger. So, if you want any kind of rapid charging, it’s up to you to sort out your own charger. And for headphone junkies, there’s no more headphone dongle included in the box. It’s now a separate purchase. You’d think if you’re paying $750-1,450 for a phone, they’d be able to throw in a $9 dongle. But no, apparently not.

I used to really like my iPhones. I’d skip a generation or two, just because of how my phone contract worked out. I went from the iPhone 3GS (which was a massive step up from my Samsung Omnia Windows phone) to the iPhone 4S and then the iPhone SE. But I did really like them.

I was all set to go for the 7+ when my contract was up for renewal last time when an ASUS ZenFone 4 landed in my lap. Even before that happened, though I’d decided that I probably wasn’t going to be sticking with Apple after the 7+.

Now I’m on an ASUS ZenFone 5 and it does 99% of what I need it to do just fine. And it’s available at a much lower cost. I see nothing in the latest announcements that would draw me back towards Apple. And even if I had gotten an iPhone 7+ I still see nothing that would really make me want to switch up from that.

I’m not going to tell you good folks not to get one. And you likely wouldn’t listen if I did. But there are probably wiser ways to spend that much money.