Apple just announced the latest flavor of iPad, the all new iPad Pro. It packs a giant 12.9 inch display with an impressive resolution of 2732 x 2048. While that is quite a magnificent display to look at photos on, the rest of the the iPad Pro specs kinda miss the mark in terms of it’s competition (i.e. the Microsoft Surface Pro 3).

Now, I realize there’s an immense amount of brand loyalty between Apple and Microsoft users, but hear me out…

About That “Desktop class processor”…

A major selling point of the iPad Pro is it’s process, the new A9X, which Apples says performs 2.5x faster than the A8X chip found in the iPad Air. Apple labels the A9X a “desktop class” processor, which would be even more fantastic if the iPad Pro could actually run desktop programs, but instead, it just seems to allow you to run more programs simultaneously. I agree that’s useful to a certain extent, but when you compare it to the Microsoft Surface Pro 3, which can run the full on desktop version of Adobe Photoshop and, Lightroom, the A9X seems to have been short changed.

You see, it’s not necessarily the A9X’s fault it can’t run desktop programs. With the Surface Pro 3, which comes with either an Intel Core i3, Core i5, or Core i7 processor, Microsoft made the choice to fully utilize it’s desktop class processors by installing a desktop class operating system on it–initially Windows 8, and improved on with Windows 10–giving users the ability to switch back and forth between “desktop” mode and “tablet” mode.

Apple, however, opted to stick with their mobile operating system, iOS (albeit the newly updated iOS 9), which seems kinda like a waste of a good processor. To be fair, I could understand this move more if they were releasing a new iPad Air, but they are marketing this as a professional level tablet, which, in my opinion, should pack as much punch as we know is possible.

Okay, The iPad Pro’s Rear Camera Is Better, But….

Compared to the Surface Pro 3’s 5MP rear camera, iPad Pro’s 8MP camera looks slightly more appealing. Then, one starts to remember this is a tablet we’re talking about here, and I’m pretty sure the majority of us want to avoid being that guy blocking the view with his giant a** iPad.

To me, it would have made more sense to put a little more attention on the front facing camera, which I would venture to guess sees a lot use from Facetime, selfie addictions, etc…But, instead, Apple opted for a rather basic 1.2MP front camera, capable of recording 720p video. The Surface Pro 3 has the same 5MP camera in the front as it uses as the rear facing camera–giving Surface Pro 3 users the ability to capture 1080p footage with either the front or rear cameras. 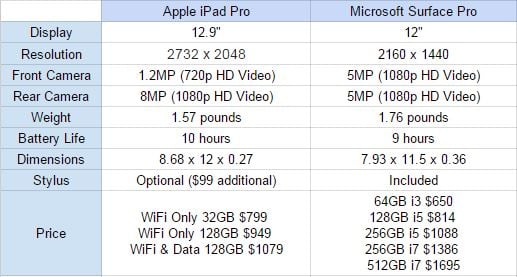 And, there’s other things, too…Like the difference in storage capacity between the two. The iPad comes in either 32GB or 128GB options. The Surface Pro 3 comes in 64GB or 128GB storage with 4GB RAM, or 256GB or 512GB storage with 8GB RAM. Not to mention the ability to add more storage via the Surface Pro 3’s full size USB port and/or it’s MicroSD card slot. This also makes it A LOT easier to move photos back and forth between your tablet and camera/memory cards/external hard drives. Especially when you don’t have wifi to access the cloud. 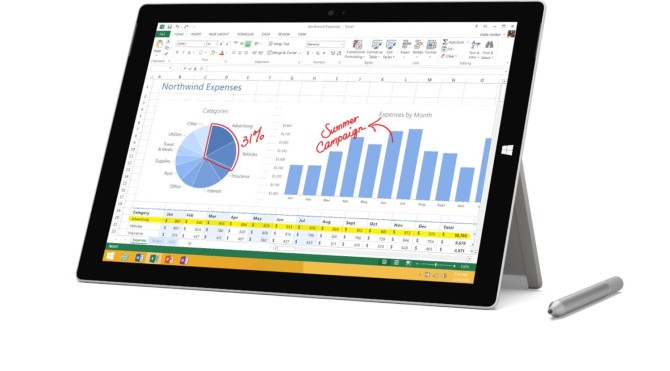 (I’ll give credit to Apple for releasing a iPad Pro model with the option to connect to a data plan. The Surface Pro 3 is wifi only, but you can wirelessly tether to your smartphone to share it’s data plan.)

Or, Just Wait Until October

With an announcement being expected sometime in October for a Surface Pro 4, it may be in your best interest to stick it out and see what Microsoft plans on bringing to the table. TechTimes has reported rumors that suggest the Surface Pro 4 will come in a 12-inch and 14-inch size, though the resolution will most likely remain at 2k. They also suggest the Pro 4 will feature updated, high-end Core processors and a more sensitive N-Trig stylus. The price point is expected to be comparable to the initial Pro 3 pricing with models starting at $800 for the 12-inch and about $950 for the 14-inch.