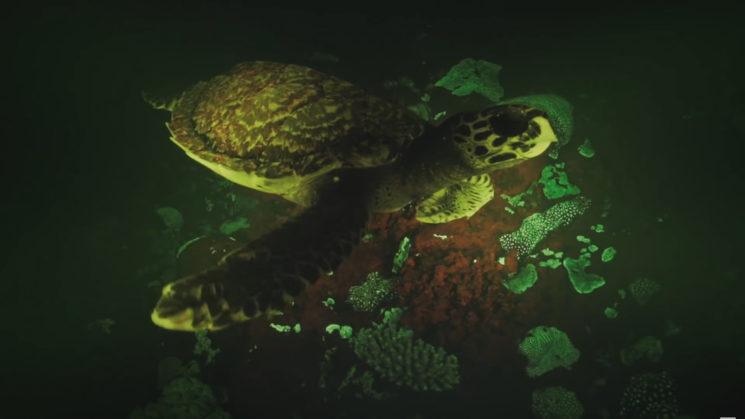 High ISO performance has become the new megapixel wars. Everybody wants cameras that can see in the dark, and they want them to be able to do it at ISO100 quality. There are a number of DSLRs and mirrorless camears out there with very good low light performance. The Nikon D5 and Sony A7SII, for example. But even their ISO performance can’t really compete with Canon’s ME20F-SH.

Capable of shooting up to ISO 4.5 million, this camera’s sensor records a mere 2.2 megapixels. A team of marine biologists recently put this camera to the test. To see just how good it really was. Their subject was newly discovered species of biofluorescent sea turtle in their natural habitat.

Biofluorescent organisms absorb light, and then re-emit it in a different colour. Molecules in the organism are “excited” by high energy light, like blue moontlight. They then release some of that energy back at a lower wavelength, like green. Researchers only recently discovered biofluorescence in sea turtles in the wild. And in order to document it, they’d need a very special camera.

That camera turned out to be the Canon ME20F-SH. A $20,000 camera capable of shooting video at over ISO 4 million. It houses a “full frame” 2.2 megapixel sensor, which means it has very large photosites capable of gathering a lot of light. In cooperation with Canon, cinematographer Andy Casagrande took this and other cameras to film them in the wild. Their journey took him and his team to the reefs of the remote Solomon Islands.

This technology allows us to see things that are beyond human perception. We’re seeing creatures and coral and turtles that we never knew existed.

Scenes like these simply wouldn’t have been possible to capture just a few short years ago. Even today it’s really pushing the limits of high ISO technology. Given this demonstration, though, it’s easy to see why the ME20F-SH was chosen as a search and rescue drone camera.

It’s exciting to see where technology’s heading and what new things it’s showing us about our world. I can’t wait to see where things are at in another five or ten years.

« Learn how to colorize black and white photos in only 4 minutes
Sony releases firmware to address the A9 overheating issue, and a bunch of other bugs »