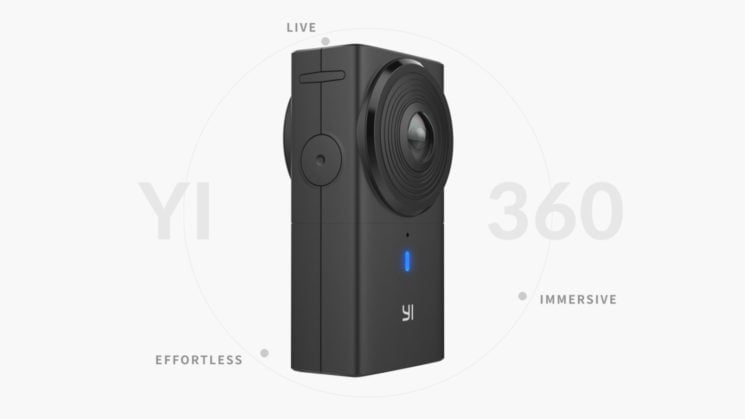 People have been waiting a long time for this one. Originally announced way back in April for release in June, the YI 360 VR has faced some delays. This was primarily down to the fact that YI felt they could get a little more performance out of the camera. Now, though, the YI 360 VR finally sees its official launch and is available to buy.

YI have teamed up with Microsoft to make it available in the Microsoft store for only $399, the same as the pre-order price. It was rumoured that the price would increase at launch, but thankfully, this has not happened. We’ve had the YI 360 VR at DIYP for a little while now. You can see our full review here to find out what we think.

As I mention in the review, it’s a pretty impressive camera, especially for the money. It’s become our go-to behind the scenes live streaming camera, as we can just leave it streaming and not have to worry too much about it. There’s no need to keep pointing it in different directions or adjusting focus as we move around a location to shoot. The viewers can follow us themselves.

The YI 360 VR shoots up to 5.7K resolution, which is unheard of in a camera at this price point. You’re looking at about double the price for other 5K+ offerings like the Garmin Virb 360. As well as 5.7K local recording, the YI 360 VR live streams at up to 4K resolution, too, and the in-camera stitching is superb when you set it up correctly.

Live streaming was one of the performance increases that delayed the camera’s launch. Initially, the YI 360 VR was announced with 2.5K resolution live streaming, but now we can do it in 4K. For YouTube, it’s fantastic, and will happily stream 4K all day long. With Facebook, it’s a little different. While you can stream to Facebook in 4K, Facebook doesn’t actually support playing that back yet. Once Facebook does add 4K live stream viewing support, the YI 360 VR is prepared.

YI also added voice commands in a recent firmware, too. This is great when you want to get a little distance between yourself and the camera and don’t want to have to deal with the mobile app. You just set down your camera, tell it to take a photo, start and stop recording, or switch itself off.

The YI 360 VR is available now through the Microsoft Online Store for $399, and in Microsoft stores throughout the USA. The camera is also listed with other retailers, such as B&H, although it’s still being listed as a pre-order with a December shipping date. It’s said this for a while now, though, so exactly when these other retailers will get them in stock is unknown. But if you want on right now, you can get one from the Microsoft store.

And if you’re still not entirely sure, check DIYP’s review of the YI 360 VR here.

This rainproof 24K resolution 360° timelapse camera rig can be built for less than $10,000