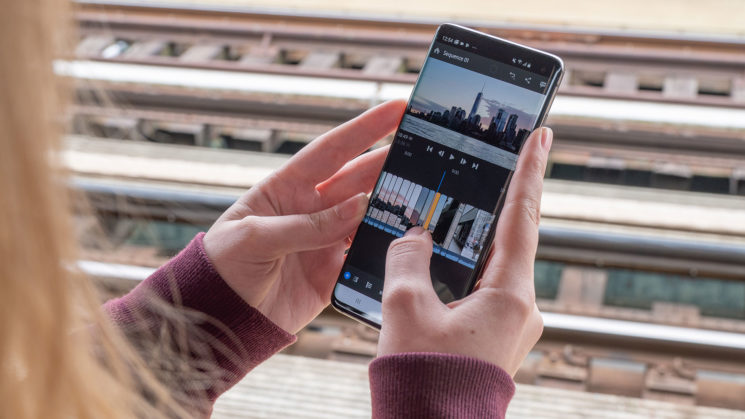 Designed for mobile creators, Premiere Rush (formerly “Project Rush“) is designed to allow you to quickly edit videos for social media without all the hassle and fuss of a full-blown editing application. It’s been available on iOS, Windows and Mac for a while now, but today, Adobe has today announced that Premiere Rush has come to Android devices.

Although, it hasn’t come to all Android devices. It’s only available for devices running Android 9.0 (Pie) or later and only on one of a dozen different phones.

Adobe calls Premiere Rush a “cross-device video editing app” which allows you to sync up projects and edits to the cloud and work on them across multiple devices. It’s similar to the way Lightroom works with mobile devices now. Its goal is to allow mobile content creators to get their work done, uploaded and shared as quickly as possible.

Even if you’re not looking to edit and publish straight from your mobile device, it means that you can at least make a start on your edits on the way home. You can then finish them off on the desktop using Premiere Rush or Premiere Pro for Windows or Mac.

The current compatibility list is a dozen phones from three manufacturers. And I don’t think these are just examples. I think this is it. This is all of the compatible devices. Because even though my ZenFone 5 runs Android 9.0, it’s not showing up as compatible at all when I attempt to view the App page on the Play Store.

It’s great that this has finally come to Android, and when I first heard the news, I was very excited as I use Android devices. I’ll be getting the new ASUS ZenFone 6 soon, which is very much geared towards mobile content creators, so I was looking forward to having a play with Premiere Rush on it. But now it looks like I might not be able to. At least, not yet?

So, if you already have Premiere Pro or the All Apps package (which is cheap in the US & UK right now), Premiere Rush won’t cost you any extra, unless you need more storage space.

I’m not sure what makes things device-specific, but hopefully, Adobe will start adding compatibility for other devices – because there are more than just three big Android smartphone manufacturers. Or, maybe they’ll figure out a way around whatever the device-specific limitations are.

Find out more about Premiere Rush on the Adobe website.

Update: We’ve received a response from Adobe regarding compatibility for Android 9 devices other than those listed above.

Expanding device support is a top priority and we are working hard to add additional support over the coming months. Each Android device has unique hardware and software components, and the Premiere Rush team strives to ensure that our supported devices have been thoroughly tested to ensure a great user experience. If you’d like to submit your feedback on which devices should be supported, please respond to this one question form: adobe.ly/rushdevicepoll.