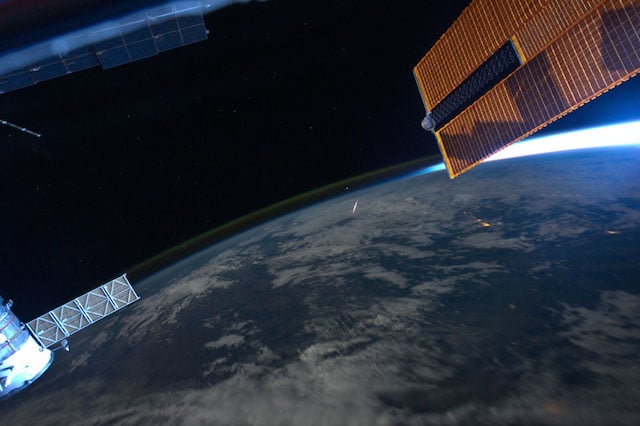 We’ve all got that picture that we can only shoot once in a lifetime. With the upcoming meteor shower this week, that shot might even come for one of us then. So when you’re a photographer working for NASA, it’s safe to say that you’re not just limited to one once-in-a-lifetime capture.

That’s the kind of shots that Ron Garan takes, while working as a photographer for NASA. Back in 2011, he had the opportunity to capture how the Perseid Meteor Shower looks from space, onboard the International Space Station itself; in celebration of the Perseid’s return, the picture was just recently posted on NASA’s website.

“Denizens of planet Earth typically watch meteor showers by looking up. But this remarkable view, captured on August 13, 2011 by astronaut Ron Garan, caught a Perseid meteor by looking down. From Garan’s perspective onboard the International Space Station orbiting at an altitude of about 380 kilometers, the Perseid meteors streak below, swept up dust left from comet Swift-Tuttle heated to incandescence. The glowing comet dust grains are traveling at about 60 kilometers per second through the denser atmosphere around 100 kilometers above Earth’s surface. In this case, the foreshortened meteor flash is right of frame center, below the curving limb of the Earth and a layer of greenish airglow, just below bright star Arcturus.”

– A description of the photo from NASA

By the way, this isn’t an event only exclusive to North Americans or Europeans. People from all over the world will be able to witness it this week. With the Supermoon coinciding this week, you should probably check out a few articles online on how best to view it from where you live. We might not all get a change to photograph these lights from space, but we can still shoot that lifetime-worthy picture. All it takes is inspiration and the will to act on it.

And money for gear. But mostly inspiration.