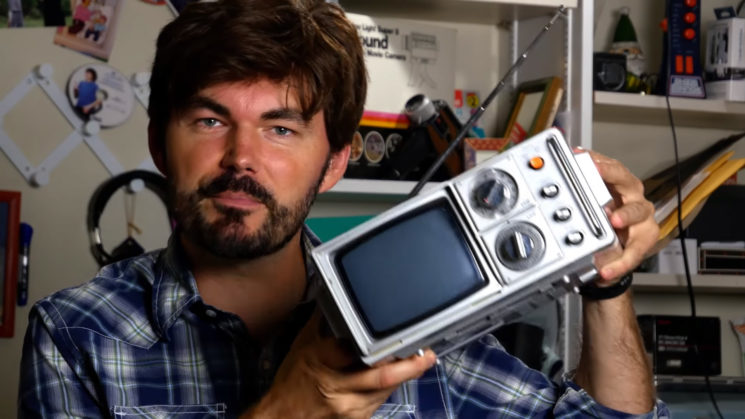 As a DIY Filmaker, one’s budget is often quite tight. You’ve spent a bunch of money on your cameras lenses and lights, but now the pot is close to empty. There are so many other little things that we need to buy, and they all add up.

To help ease the wallet a little, Dave Knop (aka Knoptop) comes to the rescue. Dave has put together his list of the 8 of what he believes to be the most useful video tutorials for DIY Filmmakers. And it’s all thanks to the magic of (a broken) television!

Dave features 8 fantastic videos, from some names you’ve heard of, as well as a couple you may not know.

First up, is the Crappie Boom, a DIY microphone boom pole with shock mount from DIYCameraGuy. All you need is a 13ft or longer Crappie Fishing Pole, and a some 32″ GearTie reusable rubber twist ties. If you want to make a more comfortable handle, you’ll want to pick up some foam pipe insulation and a roll of cloth sports tape.

YouTube favourite, Peter McKinnon brings us this tip, to keep small items safe on a shoot. I’ve used this method myself a couple of times to store small items while on location. I would suggest using a small piece of gaffer tape, though, to prevent the caps working loose in your bag.

I suppose if it’s something you really believe in, I suppose it’s ok to shortlist one of your own videos. In this one, Dave highlights his method for keeping batteries organised. Silicon bands wrapped around the fully charged batteries let him know that they’re ready to use. If there’s no band on the battery, it’s dead and needs charging. Simple, but effective.

Silicon bands have other uses, too. This time, it’s the Frugal Filmmaker with silicon wrist bands. You know, the types they often give out at festivals, or sell to raise money for charity. They’re great for adding some extra grip to your lens barrels for smoother focus.

Blu-Tack is fantastic stuff. I’ve used it to hang all kinds of stuff over the years. I’ve also tried a lot of the similar 3rd party products, too, but I always end up going back to the original. It’s great stuff, and in this video from Hardik Patel, we see how we can use it to mount a GoPro to the interior of a car.

Getting good light on your videos is essential. There’s a million different commercial options out there these days, but many are quite expensive. If you want an interesting look on the cheap, you can do a lot worse than check out this video from Krista Koivuranta. She doesn’t go fully in-depth on its construction, but it is highlighted over the first 25 seconds or so of the video. It’s quite easy to figure out how to build your own from this.

The humble lens cloth can make an excellent slider on a smooth surface, as this video from Chung Dha illustrates. This can also work with heavier camera rigs, even with a tripod using something like a beach towel.

This shoulder rig has been widely regarded as the crappiest shoulder mount out there for shooting video. For recording audio, though, it’s an excellent option, according to HeyJustJ. Much easier than having to constantly look down at a bag, especially if you’re trying to follow a moving subject with a boom mic. The best thing is that they’re super cheap!

I was always tempted to pick up one of those shoulder mounts to see just how bad they really were. I think now I’ll have to get one. As a mount for an audio recorder, it looks like it’ll be great.

What are some of your favourite low budget DIY filmmaking tips?

7 essential tips for safety on a filming set