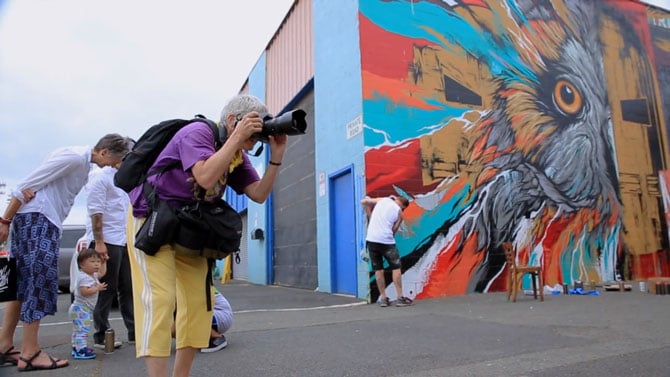 In 2013, Martha Cooper celebrated her 70th birthday in grand fashion. She had a shoot planned in Manhattan to photograph a massive street art mural. When she arrived to take the photos, she discovered the mural was actually a giant birthday card to her from two well known street artists, How and Nosm. The entire thing was a clever ploy to get her to her own surprise party. As word spread via social media about NYC’s latest graffiti installation, more and more people starting showing up to the party. Before long, there was a waiting line of well known writers, artists, photographers, and fans all waiting to have their photo taken with Cooper.

You see, though she’s a photographer of many things, Cooper has a reputation for being one of the best graffiti and street art photographers in the world. Getting her start as a photojournalist for the New York Post, after an intership with National Geographic, she was at the forefront of the graffiti revolution that painted New York City throughout the 1970’s and 80’s. She immereserd herself in the culture when it was still fresh and new, slowly building her reputation as the graffiti photographer.

Now, more than 30 years later, the 71 year old photographer hasn’t missed a beat. After the scene in NYC began to disappear, Cooper continued photographing urban sub-cultures such as the hip hop scene. After recognizing that she missed out on a lot of really good street art, the photographer has recently made the decision to refocus on graffiti. Not one to waste time, she promptyly booked a flight to Hawaii to document POW WOW! Hawaii, an annual gathering of graffiti and street artists.

“I really don’t want to be known as just a graffiti photographer. I like to be thought of more as people photographer. I’m way more interested in how that wall got up there.”

After watching the video above, one gets the feeling almost immediately that age really is just a number. After quickly working her way through a warehouse bustling with artists preparing their installations, Cooper steps into an office, cracks open a can of beer, then gets to work editing her days captures. If you haven’t already watched the clip, head back up there and hit play to join Cooper as she takes us on a walkthrough of her process, her past, her thoughts, and her inspirations.